In case anyone is reading this (and going to Blogopolis)...

I am a complete nervous wreck!

There is a very good chance my "security blanket" won't make it to Blogopolis after all - through absolutely no fault of her own. Life happens and you just have to go with it. So, that's okay, it's not as if I don't know anyone else going - but I kind of wish I didn't (don't worry, I'm about to explain that statement and hopefully it won't sound quite as odd after the explanation).

I've been avidly following all the Blogopolis talk on Twitter - problem with that is, everyone I *know* on Twitter is super-excited to go and to meet up with each other and hug and have drinks and so on and so forth. I don't feel part of any of that. Of course, the solution is to *make* myself part of it. Theoretically, I know that. Practically, though, I think I'd rather saw my own arm off.

This is the problem with anxiety. It isn't rational.

So, I'll "Suck it up, Buttercup" and get on the train in the morning, cross Swanston, make my way down to Zinc, and slink into the right room - I hope. I was going to wear all purple, but now I'm not sure. Meanwhile, I still probably won't be hard to recognise because I'm large as life and will be wearing "outside the mainstream" (probably red, purple, or green with black) intricately embroidered clothing.

If you feel inclined to say hello - please do! Even if you have commented on here, please don't be too upset if I don't seem to recognise you, I often don't recognise people I've spent hours having conversations with (it's a side effect of low vision and ADD)!

Of course, there is also the reality that Nuffnang has decided, in it's infinite wisdom, to randomise allocated seating. In theory I completely agree with this move. It will mix things up and give less well known bloggers a chance to mix with the tall poppies. In practice though, I can also see that it'll be quite unnerving for people who were relying on a friend or two to buffer them in the initial ice-breaking stages. So, I know I won't be the only person worried about not having a security blanket friend to cling to...

I think I need to focus on why I'm going - to learn. I want to learn from those who have achieved some level of acclaim how to produce the best work I can. I don't blog to get rich, but I do want to be heard (don't we all?) and I want to reach as many readers as I can. So, that is why I'm going to Blogopolis - to learn, to observe and absorb and take home and do!

This is what I look like these days. I love a chat once I get warmed up - so be warned! 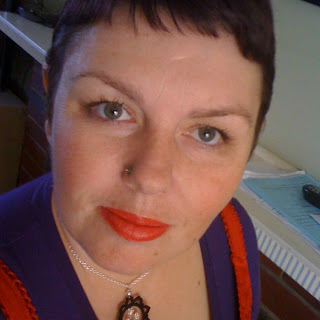 PS. If you're not from Melbourne and you're taking taxis in this city - pay by eftpos! The other night - and I take taxis in Melbourne a lot - I took a taxi for a 20 minute ride. Now, on average, cab fair is about $2 a minute (keep that in mind) and so I was expecting this trip to cost about $40 (I get half price cabs because of my low vision, so for me, it would be $20). Instead, at the other end, the driver told me the fare was $58! I told him that was quite a bit over what I expected and he shrugged and mumbled something about traffic. Anyway, I paid by eftpos. Some hours later, I took the same trip home and this time, the fare was $26 - yes, a $32 difference! So, when I got inside, I checked both receipts because I was going to call and complain - and the receipts have the taxi's registration details on them (always get a receipt!) - and I found the first cabby had actually only charged me $32!
So, here's what I think... Had I paid cash - which he was expecting me to - he would have pocketed the $28 dollar (in my case $14 because I only pay half fare) difference. However, when I opted to pay by eftpos, the taxi computer system took charge of the charge, and he wasn't able to pocket any money, so I was charged exactly what the meter said.
The moral of the story is PAY BY EFTPOS to avoid unscrupulous cab drivers ripping you off!
at July 29, 2011
Email ThisBlogThis!Share to TwitterShare to FacebookShare to Pinterest
Labels: Thinking

I hope you have a wonderful time at Blogopolis. From what I know of you online, you are a lovely, caring person, and I'm sure, as hard as it is to put yourself out there, you will come away with new friends.
Dodgy dodgy taxi driver, maybe he was trying to take advantage of the fact that you couldn't read the meter?

Have fun at Blogopolis!
And yep, my Dad had a half-fare taxi card and we got a call from the police saying how Dad's card and other cards had been used to rip off the system by the driver upping the fare, we were told to always pay by eftpos after that.

Georgia, thanks for the vote of confidence!

Jayne, thanks for the confirmation! They should probably send out a letter to all card holders warning about that - or maybe they have, i'm not diligent at reading such things, LOL!

I'm feeling a bit nervous about blogopolis myself, so its been good to read that other people are feeling the same. Looking forward to meeting you there.

Yes, I'm sure we're not at all alone! Look forward to meeting you there, too!

I'll say hello to you! I'm a bit overwhelmed with the so many people to meet... and I'm not really into the competitive blog scene. I just thought it would be nice to get out of 'mummy mode' and mix with adults who have a common interest. I'd like to learn too, but more about the writing side of blogging. I have been reading your blog for a few months now and love your writing. I haven't commented that much, but often have babies pulling at me or biting me. Point is... I'm looking forward to saying hello and I'll try to recognise you... I know what you mean about security blanket. I'll know a few people, but I think they'll want to meet people they don't know - so I'll be forced to do the same!

Hi Deborah! I'm only just reading this now! D'oh! Saturday was so crazy, I don't really feel like I got a chance to talk to anyone or really connect with anyone - which was a shame :(. I'm with you on non-competitive blogging thing. I've been blogging for a long time, long before I even realise it was a "thing" you could make a career out of! I would love to raise my profile through this blog if only to give publishers a reason to take a chance on me, but other than that I don't see myself as a career blogger, so much as - like yourself - addicted to writing!