Linking up to the Cherish Your Cherubs Project over at Seven Cherubs! This weeks activity is to RECORD your cherubs. I'm so grateful for this opportunity to take a bit of a snapshot of the boys right now - I literally dragged them outside ten minutes ago to take some quick pics just for this project - that is something I don't do very often because life is so busy!

I talk about the boys a fair bit, so on this occasion I'm going to use the suggested topics because they are on things I often don't cover - and because then I'm sure to cover the same stuff for each child!

So, here's what I'll cover in this week's activity: 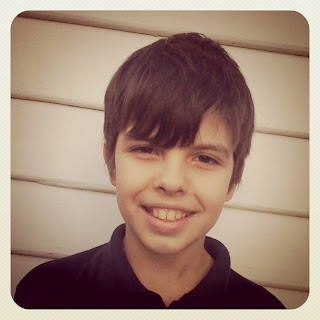 1. Erik loves to draw, loves lego, loves contemplating the world around him and asking nitty gritty questions about the hows and whys of everything. He LOVES social drama, and can tell you the life story of almost anyone at school!
2. Erik likes being on the move. Bike riding, scootering, rollerblading, anything with wheels! He likes being in motion.
3. Erik dislikes choices. Whatever the option is, he wants another one, then if he gets that option, he wants to know if he can have the first option instead.
4. Erik's favourite food is (I just asked him and he asked if it could be a drink - see what I mean about options?)... Mango Lasse!
5. Erik's favourite game is Lego Starwars.
6. Erik's favourite saying is "Huh?". 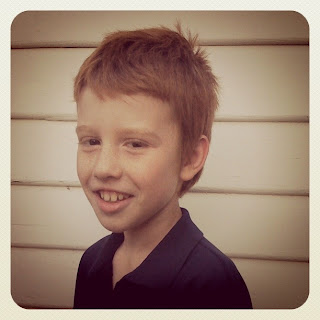 1. Lukas loves his Harry Potter wand, hanging out with his friends, and reading.
2. He likes sleeping and being a big brother - especially to the youngest.
3. Lukas dislikes being bossed around (also known as being told to do anything he should be doing but has put off to the last minute).
4. His favourite food is also a drink - Pancake Parlour Spiders (ice-cream in soft drink for the uninitiated).
5. His favourite game is Starwars 3 on the Xbox (we don't have an Xbox, or anything like an Xbox, so he plays this at friends places occasionally).
6. Lukas' favourite saying is, "Muuuuum, make him stop!"
7. His favourite song is, "Last Friday Night".
8. His favourite show is Futurama.
9. Lukas' favourite book (this was a hard one because he likes so many books) "The Pencil of Doom" by Andy Griffiths.
10. Lukas' favourite friend is Liam. 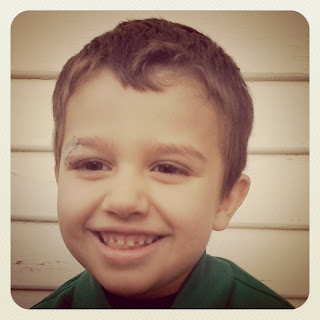 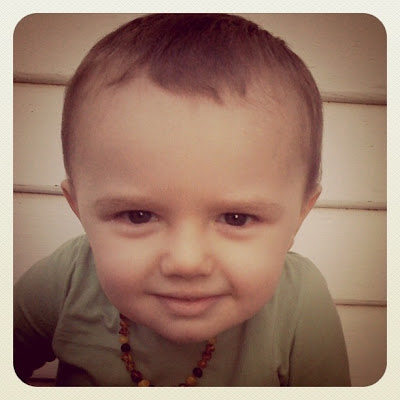 1. Ari loves cuddles and kisses, his train set, riding his scooter and going to the park.
2. Ari likes Thomas the Tank Engine dvds.
3. He dislikes being left out of anything his big brothers are doing - he particularly dislikes the baby gate in their bedroom door!
4. Ari's favourite food is butter chicken!
5. His favourite game is chasey - he doesn't mind whether he is the chaser or the chasee, just so long as he can RUN!
6. Ari's favourite saying is, "The Tardis" - which will only makes sense to those of you who are familiar with Doctor Who. Everything is "the tardis" according to Ari...
7. His favourite song is "Twinkle, twinkle little Star" (closely followed by "The Rainbow Song").
8. Ari's favourite show is Doctor Who (don't judge us, okay!).
9. His favourite book is... Anything by Dr Seuss or Lynley Dodd.
10. His favourite friend is Sienna.

For the older boys, I consulted them on most of their favourites, and some of them are not what I would have observed as their actual favourites... All the boys are mad keen Doctor Who watchers (they're watching a taped episode as I write this and squabbling over who gets to be the Doctor). Also, Lukas' favourite friend is actually Winter, but he's a bit shy about that. The big boys all listed computer games as their favourite games, but they don't actually have computer games (they've only just received iPods and they've only had access to them once), so I'm going to say all three of them love imaginative play with their lego because this is what they actually play at the most (it's a mother's prerogative to change their children's minds, right?)...

Erik is sensitive, active, and loves attention and applause!
Lukas is an avid reader of books, extremely social and feisty!
Brynjar is sweet, easy-going, but also knows exactly what he wants out of life!
Ari is a firecracker, loud, boisterous and passionate!

at August 22, 2011
Email ThisBlogThis!Share to TwitterShare to FacebookShare to Pinterest
Labels: Family life

LOL, that's very cool! Erik used to be a fiend for passionfruit when he was little, but that's gone by the wayside in recent times... Erik also doesn't like meat much, not red meat anyway, and not fish either - whatever we serve, he'll eat about half of except chicken.

My 10 year old son is so similar to Lukas! On nearly every point except the drink, though probably because he hasn't tried that yet. I'll have to initiate him into the joys of Spiders.

Thanks for sharing your boys - through this project I'm really learning what I'm up for once my 2 get a little older!

Wow - you're outnumbered in your house! A lovely snapshot captured there, and it doesn't take much does it? I think Naomi's project is fantastic. I'm going to try and get some more photos and records down this week.

I'm so glad I got that photo of Erik this morning, but just two hours later he went for a spill on the ashphalted basketball court and took a chunk out of his chin - that there is probably the last photo we'll have of him with a scar on his chin!

Thanks so much for stopping by guys, I'm trying to get around to all the other links, might have to finish up tonight - so many interesting stories!

I love that two of the favourite friends are Sienna and Aidan - they are my kids names!

It's been lovely learning more about your gorgeous boys.
x

Stranger Than Fiction aka Yeran said...

You have some lovely little gentlemen there!
My favourite bit was the disclaimer from you about the fact that they said their favourite games are video games, but they only just have an iPod. I guess they might have been dropping you hints ;-) Christmas is just around the corner lol.
And I totally love that Ari calles everything a 'Tardis', that's just adorable!

Wow 4 boys, I am in awe. They sound lovely each one of them. Our 6 year olds are similar... just empty stomachs on legs wanting to be fed. Oh and the beyblades!

I love the interviews you did Sif.
Your boys are handsome dudes. Mine are always hungry and asking for food too.
I interviewed mine about other things but I am going to do this too.

Sif, your boys are heartbreakers in the making! x

As a mum to two princesses, this is such a lovely insight into the world of two boys. They are super cute, by the way! :)

You have gorgeous boys! I think my boys would get along famously with your boys. We're all mad keen Doctor Who fans here too

Thank you everyone for your lovely comments! I'm pretty proud of my boys and think they're kind of special :).

You have such gorgeous boys Sif. Trust their fav things to be what they dont have, yep, hint hint there! Loved reading this, wondering what the world of a boy is like. Wont be long before I really do have the best (and worst) of both worlds.

I so love this post. This is exactly what I was hoping everyone would do and I love that you answered specific questions about your cherubs. I love how they are each unique and that you have highlighted that in your post. Your boys are gorgeous and my favourite part is at the end where you describe them. Brilliant! N x