Is wanting to be heard enough?

I haven't been to a conference in many, many years - having four children in 9 years will have that affect, most particularly if you're the kind of parent who puts a high premium on being rather closely attached to your children 24/7 until they literally push you out the door and demand you give them 'some space to breathe' (okay, it wasn't quite that full-on, just for the first 7 years of parenting, or so...).

It was quite an experience, and honestly by the end of the day I felt a little like I'd just spent a day with some  rah-rah cult - but only because everyone was so amazingly pumped and focused and the breaks seemed to whiz by in the blink of an eye, before I got a chance to really speak with anyone. I have vague memories of lovely people approaching me to say hi, and me asking them which blog they wrote (often met with blinking on their part which suggested to me I should know them much better than I obviously did) and then saying it was great to meet them and really not giving anyone the kind of focused attention I'd have liked, so I could show them just how much I appreciated them having the courage and initiative to say hi in the first place... [breathe!]

I did learn a lot though. I learned:

On that last point. Is being heard enough? I don't know.
Some people blog because they have something they want to promote, a product, an idea, a movement.
Some people blog because they want to make money.
Some people blog because they want to be liked.
I tried to sit down this morning and write my goals for this blog - you know, to try and find some keywords for this blog (in an effort to mindmap some blog post ideas for the future), and I just couldn't get anywhere with it.
I like to talk about things that happen around here - a house full of boys is always going to attract some interest (mostly because people think I must be insane to have all these boys - you know, because like all other parents I planned for four boys and put in order which was delivered over time... Yes, yes, that's exactly how it all came to be). But I couldn't dedicate an entire blog to writing about my life with my boys [as wonderful as they are]...
I like to talk about writing, and my continuing struggle to make enough effort to give myself a chance to actually be published (I know I can get published, I just know I can, but I also know I don't work nearly as hard at it as those souls who do actually manage to attract the attention of publishers). Again, not enough to dedicate an entire blog to it (thought The Untamed Goddess - yeah, the button says the untameable goddess but I've recently changed it, just haven't changed the button yet - is dedicated to my writing exercises at least, I just don't promote that blog as much).
I could write about being legally blind and having ADD - and all the fun that comes with that - because it's all a lot of laughs, with a few frustrations mixed in for variety.
I could write about trying to put together a PhD proposal - I know everyone enjoyed reading about my trials and tribulations with the Masters degree over the past couple of years so much...
I could write about social topics and issues that get up my nose interest me.
I could write about so many things... And I do! I just couldn't dedicate an entire blog to any of these things, and the only common denominator for all of these topics is me. Me wanting to have a voice and be heard. 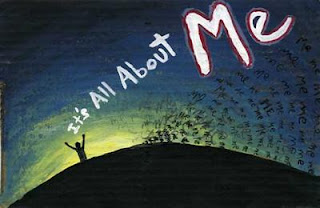 Is that enough of a goal for a blog?

What do you think?
at August 01, 2011
Email ThisBlogThis!Share to TwitterShare to FacebookShare to Pinterest
Labels: Thinking

I'm glad to hear you didn't mind that people came up and said hello to you. I felt like a bit of a weirdo especially since I don't comment here when I know I should (trying to pull my slack socks up, I swear).

And as for blogging for yourself.... I see nothing wrong with that!

Yes, I think I need to just accept that I'm a different kind of blogger - possibly not a professional blogger - but a keen one, nonetheless!

I love comments, and when people comment, it makes it so much easier for me to find their blogs to read and comment on as well!

Sounds great to me Sif- i've enjoyed reading your blog for a while now (probably since back when we were pregnant at the same time- 2008) ... its probably one of the only blogs i read regularly - others i drop in and out on.

Sif Dal said...
This comment has been removed by the author.
9:16 am

Aw, Sarah, you just made my heaet sing (which is a great feat at jst after 9 in the morning!)... Thank you so much for the affirmation!

I loved meeting you Sif and I was so excited I was able to identify you by your 'bag'!

I'm with you on the goals! I am the same.