Tattoo Tuesday (yes, on Wednesday, what of it?): Eternal Gratitude...

Linking up with Tattoomummy for Tattoo Tuesday! 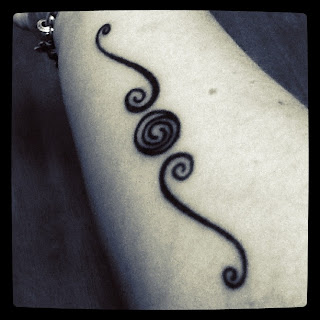 What : a symbol I created myself from a stylised gratitude symbol (the circle) and two stylised eternity symbols on either side. It represent 'Eternal Gratitude', to me.

Where : inside right forearm.

Why : I'd decided to have a tattoo done for each of my boys representing my relationship with them, and what the mean in my life. The first three boys were easy, but Ari's was harder. Partly because he was only just truned two and I didn't feel I knew him as well as the other boys yet. I decided to get him an interim tattoo, but something that would remind me how lucky I was to have had four wonderful boys, especially him because he was the one I hadn't told my husband we had to have from the start (I'd dreamt of the other three early in our relationship and told my husband we just HAD to have those three, but then I realised there was a four waiting to be born - a bonus child - one I'd never mentioned before)... Ari was also my long wanted homebirth, and I'll always be grateful I had that experience.

Generally speaking, though, gratitude is something that is very important to me, so I wanted this tattoo as a ready reminder.

Ari loves to trace 'his' tattoo with his fingers, and often draws his own tattoo on his forearms, which makes me laugh!
at August 31, 2011
Email ThisBlogThis!Share to TwitterShare to FacebookShare to Pinterest
Labels: Family life

that is gorgeous and I absolutely love the meaning behind it!

This is gorgeous! I want to see your others now lol

Thanks guys! All my tatts are simple line designs in black ink. I may have colour added later and I have a plan for a coloured tattoo on my right upper arm...

Gratitude is so important and so easy to forget. It's great to have a reminder.

Haha now you sound like me posting your linkups late!
Love this tatt :-)

Tat, that's what I thought!

Jayne, LOL, tattoomummy didn't create the link up until yesterday - had nothing to do with me, hehehe!

That is a wicked tattoo. I'm too chicken to get one.

It really helps me that my brother is my tattooist!