Lately I've been watching 'World's Strictest Parents' which is pretty much a show where teens who seem to be vying for the World Championship title of 'Most Dislikable Adolescent' are removed from their comfort zone for a week or two and placed with a 'strict' (otherwise known as sensible) family for a week. In this situation, the teens buck and kick like mules for a number of days while their temporary foster parents patiently reinforce their stated rules (which is relatively easy for these 'strict' parents because a) they are impervious to emotional manipulation due to lack of bonding and b) they know the brat-at-hand will be off their hands in a couple of weeks anyway), until eventually the teens inevitably buckle under and come to their senses.

At this point in the show the broken teen is handed a letter from mum and/or dad exclaiming their concern and hopes for their wayward child - and this is where I always find myself gritting my teeth... Without fail the parents - well actually, it's mostly the mums - will state that their child is their best friend, or that they want to be their child's best friend...

I'm just saying it cannot happen while the child is still dependant on the parent for food, shelter and protection.

True friendship is an equal partnership. Both parties are equal, both parties can set boundaries. Both parties have the same amount of power in the relationship. This is simply not the case with parents and their children.

If parents attempt to be their child's best friend, they put too much pressure on the child to confide in their parents, and considering the intensity of a parent child relationship, this gives the child no breathing room to vent their own frustrations - it's like trying to be best friends with your boss (yeah, yeah, someone is bound to tell me they are best friends with their boss - well, that's pretty rare and if one of you screws it up it's never going to be as messy as messing up the parent-child dynamic).

Likewise, asking your child to be your best friend? Come on, you seriously can't find someone else to be your emotional support? Essentially, that's what a friend is. Don't ask a child to fill an adults role - get a friend your own age!

I'm great friends with my mum, now. We weren't friends until I grew into adulthood - poor mum had to wait until I was nearly thirty. I was still ascerting my independence until then.

Teens are all about ascerting their independences and figuring out who they are independent of their parents (who provided all the DNA). It's kind of hard to be best friends with the people you need to reject before you figure out what parts of them you identify with. If you're cheek-to-cheek with the big picture, it's hard to get enough distance to really see the big picture!

Perhaps one of the issues these terrible teens are having is that there is an expectation of the grand friendship while the teens need enough distance to figure themselves out without the risk of hurting their best friend who just also happens to be their safety net...

By all means be friendly with your teens, be their for them, be an open ear - but please, please, don't delude yourself that you are your teens best friend or expect them to be your best friend. That kind of relationship cannot be had with the person you have to guide and set limits for, the power imbalance is too great. Trying to be your teens best friend is not fair to them, it sets up false expectations that conflict with your role as their mentor and safety net. 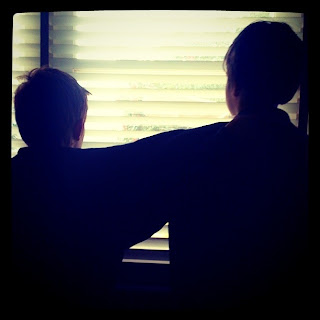 at August 19, 2011
Email ThisBlogThis!Share to TwitterShare to FacebookShare to Pinterest
Labels: Thinking

I watch parent after parent make this mistake, it seems to be a warm fuzzy trap they fall into and cant get out of. I have noticed it more in single parent families. (Just an observation, not a condemnation.)
It seems to work ok for a while with the preteen kids but when the child begins its teenage struggle for independence the effect is devastating.
People do it with pets too.
There is a certain amount of responsibility one assumes with a pet or a child as an adult and to maintain a workable relationship. I believe there has to be an understanding that in the long run, the adult has the final say.

Of course, children are nothing like pet, but yes, when you have to be the person who says, "I know binge drinking is fun, but I'm going to ground you if you do it!" it's hardly fair to the kid to pass yourself off as their best friend... Who are they going to go and vent about you to (and hopefully get some perspective from), if you are their best friend?

Steve Biddulph in his book about raising boys suggests arranging a non-parent mentor for your boy, someone who can be the 'good guy' when you adolescent is butting heads with you - I think this is sound advice.

There is a reason they say it takes a village to raise a child, the parents can't be everything to their child - disciplinarian and best friend; mentor and peer... We cannot change the laws of nature, captain (yes, I know that's a misquote)...

I have no intentions of being my child's BFF. On top of your reasons I like to have at least some common interests with a friend and The Wiggles just don't do it for me.

Woohoo!Someone talking sense at last!I agree with all you say!Iam my child's mum and that's my role!Yes I want to be friendly with them but I have a *bigger and more important role* as a mum.I have seen friends make terrible mistakes with this idea of friendship and it doesn't seem to work,not in my eyes anyway.The time for friendship will come later I think

Absolutely agree Sif. I'd like to be friends with my children but at the end of the day I am your mother not your friend. I would like my kids to have the confidence to tell me things but I'm still going to discipline them when they get it wrong. I don't know if you ever watched "Gilmore Girls" (it was a staple while I was Breastfeeding in the middle of the night with #1) I find it is a really unrealistic representation of mother/daughter relationship but at the same time I would love to have that with Addison. I do know however that since we already clash I will not be her friend until she has left the nest - same as I was with my mother. I am prepared for the hurt i will suffer, because I remember the things i said or did to my mother and wish i knew better, but i was a teenager I knew best!

I absolutely and totally agree. My
Sister is 6 years younger than I am, and nearly 9 yes younger than my brother. My brother and I were patented fairly strictly as teenagers, we knew Mum was not our friend. When it came to my sister, though, and both my
Brother and I had left home and my mother and sister had moved to a more isolated area, mum began to rely on my sister more and more for "friendship". It turned into a massive rebellion from age 13-17, running away, alcohol, boys/men etc. Now at age 21 my sister has moved on from all of that, and she and Mum are very close. But they are by no means best friends anymore.
I believe and have seen many parent/child relationships that are close, caring, loving and open. But there is a way of cultivating all of that without needing to be your child's best friend.

Rofl, last night I was totally thinking I'd gone and shocked everyone into silence with my outrageous and offensive assertion!

Glowless, having something in common helps - I have a post coming up on that, that now that my kids are old enough, we are finally having interests in common. It would be nice if we could - like most friends do - just agree to disagree on other stuff, like their bedtime, but unfortunately, as their parent I feel I have a responsibility to not only disagree but make them concede to my will - which none of my friends would stand for for a second!

Jess, as you said, friendship comes later, and when my boys are able to set their own boundaries - or it's no longer my business what they do - they there will hopefully be a place of friendship in which we can meet and get to know each other as adults with differing opinions we which will hopefully agree to disagree on.

Courtney, I used to LOVE the Gilmore Girls, totally unrealistic and totally fabulous! I think it appealed to many people because that is how they WISHED their relationship could be with their child, but let's face it, Rorie was far more sensible and mature than most teenagers, not only these days but ever!

Amy, I do think it's too much pressure on a young teen to be their parents support system and I think it leads to teens feeling they are just as capable and experienced as their parent and then making choices based on teenage impulses (which most adults have left behind) and without the ability to foresee the possible outcomes...

i think there is truth in both sides. I see it time and time again that parents become "best friends" with their children and then have problems asserting themselves and enforcing boundaries.

i think the concept of friends is very individual, unique and important. On the opposite side, if teens are always seeing their parent as the "parent" that is always the "badie", then I think this too causes problems.

How one sets a middle ground is what differentiates. Seeing your parent as a friend and confidant encourages teens to communicate and open-up. However, parents still need to be parents and not place their own emotional baggage onto their child like we would do with our own friends.

children and teens need boundaries and sometimes this may become fuzzy if it is only a "friendship". So, how can we be both is what I ask? How can we be the friend and the parent and not let the two cloud each other but work alongside each other?

I think a bit differently on this-I think you can do both-so long as you still put being a parent first. I'd like to think my kids will be my friends, but I am always aware of the need to be the adult and set boundaries etc too. My kids aren't teenagers but I think we have a friend-like relationship at times, bc I will muck around with them, play games, make up silly stories etc too-but easily transition into 'mum as boss' mode when needs be. I don't think any method is inherently right or wrong-we are all individuals and the most important thing is being the best parent you can be for your own children :)