Thank you Bill and Claudine... The story of a house. 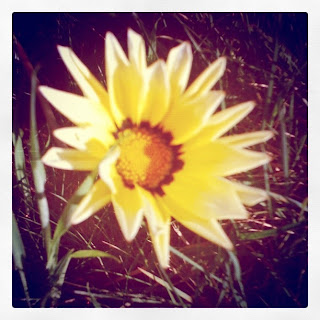 We're renters. One day we hope to be buyers or even owners, but for now we rent. The house we're currently renting is relatively small for 6 people, but it's on a huge block of land - well, huge for suburban living, and certainly huge if you consider how much more high-density living there is in Australia these days. We live on a corner block with a really big back yard, and a decent sized front yard. The front yard is enclosed - I'm using that term loosely because, as I write this the front gate is broken and doesn't close properly - by a metre high white picket fence. The back yard is enclosed by a much taller paling fence. Nothing modern, or snazzy, or heavy duty - just practical. 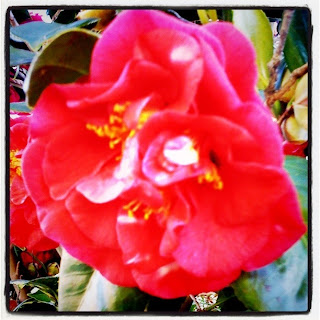 The original house would have looked like a cross if you took an aerial shot of it when it was first built. The western point of the cross is the master bedroom - it gets incredibly hot in there during summer and they didn't put a ceiling fan in at any point, so I can only imagine Bill and Claudine (we've seen mail addressed to them, their names were William and Claudine) spent many a hot night laying on top of sheets, maybe with a table top fan to cool them. 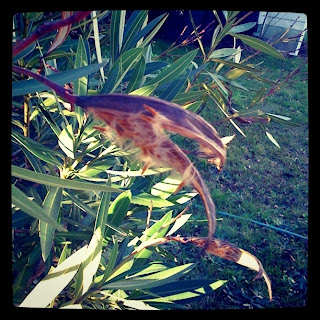 The southern point of the cross is the lounge room; a long, narrow room with windows and doors and a gas heater on every wall so that you can't sit any large pieces of furniture against any of them. I don't think Bill and Claudine were into large pieces of furniture. There is a built in set of shelves, which span the 1.5 metres between the gas heater and a corner of the room - these shelves are not deep enough for records, but may have held books, not a lot of books though. 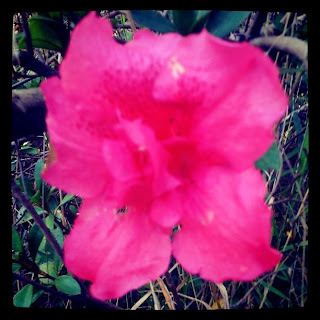 The eastern point of the house is the toilet and laundry.

The southern point is the bathroom and a bedroom.

In the middle of the house holds the kitchen and the dining room. The benches in the kitchen, and the sink are very low. They only reach the tops of my thighs and I'm only 163cm (5'3") tall these days (I seem to be getting shorter), So, Claudine must have been a shortish woman because standing at the kitchen sinks does my back in. There is no room for a dishwasher of the electric variety in the kitchen.

Some time after the original house was built, other spaces and rooms were added. In the south-eastern corner of the cross there is a patio which is delightful to sit on in summer, it's big enough for a table and chair, a swing seat and paddling pool.

In the north-eastern corner of the cross a room was added off the laundry - at first we couldn't see why until we noticed the red lamp, and the black rubber fittings around the frames of the door and the windows. What is now our second laundry, rooming the dryer, clothes horse and ironing board, used to be a darkroom. Either Bill or Claudine were interested in printing their own photos and had a custom built room complete with shallow basins and peg lines! I like to think it was Claudine because there is also a buzzer in the room which goes off in the garage, so maybe she used to buzz Bill up to the house when dinner was ready.

In the north-western corner of the room is a third bedroom which can be accessed through the second bedroom. Maybe Bill and Claudine had an oops baby? Maybe they had to take care of an elderly parent for a spell before the parent passed on?

Two things we do know. Bill was a DIY man - most men were after the war. He may have been a professional plumber because a lot of the DIY projects we have spied have been plumbing projects. If he was a professional plumber, he liked to save money by cutting corners on the jobs he did at home because a lot of the work he did has come under criticism by the plumbers who have come to fix our plumbing years down the track - poor Bill!

The other thing we know is that Bill and Claudine were avid gardeners! The garden is full of all sorts of fruiting trees and bushes and flowers. They like the unusual and the exotic - many of the fruits that grow in our back yard are completely unfamiliar to us. They also kept chickens. They had a very small car because also the garage is big enough, but the driveway is quite narrow.

Bill spent enough time in his workshop, which is attached to the garage, to warrant installing a buzzer to save Claudine having to yell out to him when she needed him. Bill also fancied himself as an electrician because he's rigged quite an interesting series of lights and outlets down in the workshop - so maybe he was an electrician who figured he could do his own plumbing as well, or maybe it was the other way around.

We never met William and Claudine, but we know William died first and that Claudine was alone here for a few years before she also passed on because I met the lady who was the emergency person to contact for the alarm Claudine used to wear around her neck on a cord. That lady was nurse who lived in a unit next door but recently moved. When she spoke of Claudine it was with warmth and a little exasperation, so maybe Claudine was an independent soul.

I wonder where her children moved away to?

I don't often think about Bill and Claudine but today is a gorgeous spring day - spring has sprung early this year - and the garden is full of bright and fragrant flowers and bushes releasing their seeds into the spring breezes, and I'm thankful to Bill and Claudine for providing us with all this beauty and these lovely scents!
at August 20, 2011
Email ThisBlogThis!Share to TwitterShare to FacebookShare to Pinterest
Labels: Family life

What a lovely story.

We have no such story for our house. We built it almost 5 years ago whilst I was pregnant with our first child. Although our first house was full of little quirks and extensions that make me wonder what they were thinking.

So what will the next owners of your house be led to believe about you from the house they inherit?

I find houses fascinating. My mum and dad once bought a house where the master bedroom was painted entirely in black, including the ceiling, and then stencilled across the built in wardrobe in silver was the image of deer racing through a forest!

My house is falling apart around me. It does have a strange story to it, I'm just not sure what it is. All I know is, the toilet is on a lean, the kitchen floor has a speed hump in it - raised in the middle due the stumps moving i guess. Also every wall has a big crack in it, there are termites in a lot of places - they might be small but they are loud eaters. The tiles in the laundry are cracked (from stumps moving?) the titles in the bathroom fall off the wall (makes bath time super fun) and the back yard is huge (farm house) but looks so over grown. We rent it so it will fall down before it gets fixed, leaving us out in the cold. Anyway, it keeps us dry - unless you are in the lounge room near the window or in my bedroom where the water mark is getting larger.
Its amazing what a story a house can have.