I started writing this post yesterday (Monday) at about lunch time, it took until 7pm to upload the photos (we'd been shaped for the first time ever!), and then I kept writing and rearranging things, and just as I was about to hit send, I lost my mind - or so it would seem - and clicked the close window button, instead. I lost everything! Luckily, I'd already arranged to have the shaping lifted (by moving to the next plan up the hierarchy), and so I only had to wait until midnight to recommence writing this post.

Now, this post was supposed to be about picky eaters and children with food neophobia, but it turned out I need to do a bit more research for that post - so, um, stay tuned!

Instead, I thought I'd write a little about the madhouse that is our home, and a few examples just from the past few days about how there is never a dull moment around here...

When the mail arrived on Friday I almost had a heart attack after opening the water bill. It came to $341! That was after the pensioner rebate was calculated!

To put my reaction into perspective you have to understand that before we moved to this house 16 months ago, our quarterly water bill never exceeded $60 and mostly hovered around $45. Our first bill at this house was in excess of $160! When we received that first bill I rang the water company in a panic and demanded the metre be reread. Unfortunately, the reading had been correct.

It seems $160+ for a family of six is not considered unreasonable because the lady on the other end of the phone acted as if I was completely overreacting!

At the time, we did notice that the hot water tap in the bathroom was dripping a bit - sometimes it was more a dribble than a drip - but honestly, we didn't think that much water was pouring down the drain.

Then on Friday the $341 bill arrived. Again I called the water company. This time the lady on the other end (a different lady, obviously) did seem a little alarmed at the amount of water we were churning through - especially when she realised we'd used a further 7000 litres in the four days since the last reading. She asked if we had any leaks we were aware of and we mentioned the one dripping tap but she didn't think it could account for all that water.


It was at this point the Grumpy Old Man mentioned he thought a bit of water was running through the toilet cistern (and somehow he hadn't considered this important enough to mention to me earlier?). The lady thought that might be our culprit. She suggested we do a test to check for speed of water usage when all the taps were turned off (so, when there shouldn't be any usage at all). Yes, well, evidently we were still losing a lot of water, even when we weren't actively using it.

I took the opportunity to measure the drip in the bathroom by putting a measuring jug under the tap for an hour. Turned out we were losing about 18 litres of water per day from the slow dripping of that tap alone! That's about 1656 litres per quarter! Then the Grumpy Old Man informs me a tap over the bath has been dripping all this time as well - so double that figure - 3312 litres every quarter! If the taps were dribbling, it was more. Add to this the toilet - which was more than a dribble, and basically we were probably losing something like 10 000 litres of water every three months!

We organised for an emergency plumber to come around - only after the real estates receptionist told us to email our agent and she'd call us back next week! No, seriously, they didn't mind if we paid a few hundred dollars extra in water bills... We politely said, thanks but no thanks and called the emergency plumber (which we were within our rights to do, because it was a major leak).

So, anyway, I'm expecting our next bill to be considerably smaller - or we'll have to start investigating underground leaks!

That crisis sorted, Saturday night was the long awaited Trivia Night for our school. The Grumpy Old Man had gone and won the Trivia Night a couple of years ago, but last year's theme was pirates which didn't appeal to either of us.

This year, however, the theme was Witches and Wizards and I just had to be there - I mean, my entire wardrobe is befitting the finest witch, so this night was just the thing for me!

As our entire babysitters club was attending this event - which was rather inconvenient for all of us - I somehow managed to bewitch the lovely Jayne into offering to babysit for us (to be fair, she's just lovely and offered of her own free will - at least that's what she believe, so sssshhhh!).

I felt a bit anxious for Jayne because not only would she have six kids in her care (our four and her two) but our four aren't used to staying up beyond about 7.30-8pm, so she'd have at least four overtired kids to wrangle. So, I decided to bring forward the purchase of the "car iPods", and let the big boys have them that night (and Ari got to borrow my iPad - though truth be told, he actually believes it's his and I borrow it from him)...

Jayne brought her own iPhone and iPad for her two and some time during the evening she took this photo of the six of them engrossed in their various technologies!

So, I know you all (y'all? youse?) are wondering what I wore to the Trivia Night! Here it is...  All my regular clothes, except the hat!


And all the cool witches wear stripy stockings, right? 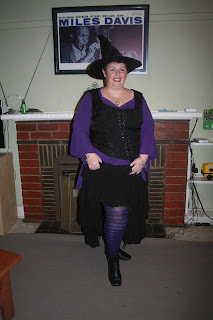 Of course, where there's a hat, that's where you'll find my boys lined up to try it on!


We had a brilliant time at the Trivia Night. Our table didn't win - only because we didn't realise that boxing is the sport most often featured in films, and Spain won the 2010 Soccer World Championship, or some such thing (and maybe a few more questions as well)...

However, I did win the game of True or False - which is noteworthy because there were 200 of us playing! In the end it came down to whether Forest Gump did or did not meet three American presidents in the movie of the same name. For the record - he didn't!

For knowing that, I won 2 x 30 minute massages in my home, a $50 hair and beauty salon voucher and a $50 My Christmas Shop voucher. I thought that was pretty good! I'm planning of buying a gingerbread house cutter set from the Christmas Shop - woot!

Had a quiet day yesterday, which unfortunately involved a lot of tidying of the feral pigsty also known as our home... Apparently, being a Vivacious Witchypoo does not exempt you from domestic duties (I'm sure I didn't see that clause in the small print...).

This afternoon - you know, because it had been relatively quiet on the home front for at least 36 hours - Bryn brought home the class stick insects!

In case you didn't pick up on my subtle expression of grossed-out-ness, I don't like stick insects. In fact, I'm not overly fond of any kind of insects. They're creepy and they're kooky, mysterious and spooky- no, wait, that's the Addams family. Anyway, they move too fast and they have abnormally long legs in proportion to their bodies (hmmm, I'm not too fond of marathon runners either, now that I think about it)... Bryn wanted to take one out to show me - I wrinkled my nose, and poof! I was outta there!


And then he tells me one of them had just finished crawling out of its skin as if that was somehow an achievement to be proud of! I told him if I ever caught him trying to crawl out of his skin like a stick insect, I'd get his dad to put him in a jar and take him out to Healesville Sanctuary and leave him there. This threat was met with peels of not-so-angelic laughter.

He was encouraged to write down some observations he made of the horrid little vile-creatures - I took this picture then left him to it! I don't think I'll sleep a wink tonight... thankfully, the stick insects have to be returned in the morning. Phew! 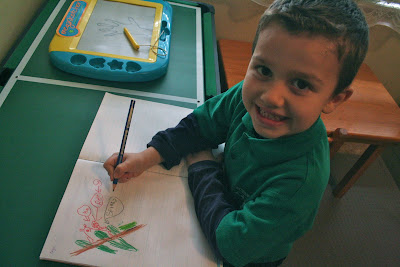 Sometimes the Grumpy Old Man and I look at each other and wonder if our lives are really as chaotic as they often feel. Yes, in fact, they are... but I wouldn't have it any other way!
at August 09, 2011
Email ThisBlogThis!Share to TwitterShare to FacebookShare to Pinterest
Labels: Family life

Oh I love your outfit, looks great! And congrats on winner those vouchers, I LOVE winning stuff.

I know you do! What were all the things you had won recently?

Oh yum! I want to win some chocolate and lollies!