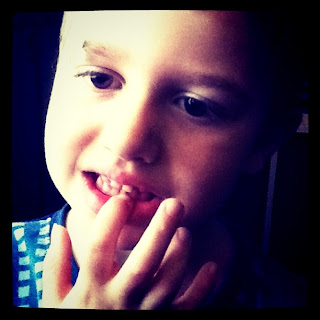 Teeth and I have a difficult relationship.

When I was four, I couldn't wait for my aunt, who was nine at the time, to get off a swing. I really wanted to get on that swing and she told me to just hang on a second while she got off but I was a four year old version of my impatient self and ran towards her as she was swinging out... Her boots collided with my mouth, I reeled backwards and then I remember lots of blood - maybe on snow, or maybe that is my imagination - two of my front teeth had come out, but we could only find one. My next memory is of a man's face hovering over my face, a bright light and lots and lots of pain. I've heard he tried to replace of the tooth, without anaesthetic.

I'm not sure what the butcher dentist did, but the result was that one of my front teeth is now crooked, I cannot deal with other people's wobbly or missing teeth and I have a dentist phobia. My phobia is bad enough that I've only been to the dentist twice in the past twenty years, both times to extract broken teeth. Since the last time (in 1995), I had three broken teeth that I haven't had tended at all.

Dave has his own dental phobia, which was oddly enough also the origin of his fear of heights.

Between us, the fear of dentists is so great that I have to admit none of my children have ever been to the dentist - that's right, never...  But hey, my dad refused to go to the dentist before he was nineteen and when he went, his teeth were perfect!

So, by now you're wondering what on earth I could possibly be thankful for?

- that despite never taking them to the dentist, my boys seem have healthy teeth! Luey had one cavity, once, in a baby tooth, but nature took care of that and now it's been replaced with a healthy grown tooth!

- that my boys teeth, though gappy (hey that gap between the two front teeth is a family trait and means you're a fortuitous person, don't disrespect the gap!), are straight!

- that the boys don't freak out every time they have a loose, wiggly tooth the way I did.

- that they adore brushing their teeth and we've never had to coax, cajole or force them to do so (the secret it to not make them do it until they beg you to get them a toothbrush because they see you brushing your teeth every day)!

- the biggest thing I'm grateful for is that for some strange, but wonderful reason, my boys have been considerate enough to wait until after school photos to lose their teeth and by the time the next years photos are being taken their adult teeth have grown in. So, no toothless school photos* (so far)!

*I realise others probably love their kids toothless grins in school photos - I don't!

What are you thankful for this lovely first day of Spring?
at September 01, 2011
Email ThisBlogThis!Share to TwitterShare to FacebookShare to Pinterest
Labels: Family life

We have a friend Sif who is a dentist and she tells me that gaps between kids teeth is a great thing as it means there is plenty of room for their adult teeth to come in straight :)

I hate the dentist, i need to go :( takes me a long time to work up the courage.

The last time i went to the dentist he told me i needed to have my wisdom teeth taken out. That was 4 years ago. Ive never been back and my wisdom teeth are still there.

Oh, you poor thing, Sif!
I'm actually the opposite! I've always said I'd go to the dentist 10 times over than go to the doctor once! LOL! And that's despite having teeth pulled as a child because my teeth were overcrowded and having all my wisdom teeth extracted in the chair! I think I've just lucked upon some fab dentists!!
Ella had a ride in the chair a few years back and loved it. I'm now due to take Baby Holly. I'm thinking of booking us in as a family - need to convince hubby he needs his checked!! Hmmm, that could be a battle.
Glad your little ones love brushing their teeth though. That's great!

Our dentist is so lovely. Been seeing him since I was little myself and he is fantastic with kids.

That said, small boy tried to bite his fingers off last visit :o I've just found out that due to my boy's oral issues and dx we can access a health plan for dentistry and see a specialist in autistic kids (dental issues common due to the chewing/excess saliva thing) so I'm feeling grateful for that. Don't want to traumatise my nice dentist any further lol.

Thanks for linking up!

Both my kids go with their Dad, though I did go with them last time and actually watched the check up. Their dentist is a wonderful woman who gives them no reason to fear and that makes me happy.

Sarah, that's great to know! I have gaps at the front, but definite overcrowding at the back!

Jocelyn, I always think dentists are finding problems where there aren't any necessarily! I'm paranoid like that, lol!

Kellie, you know, my mum relaxes so much at the dentist that she is prone to falling asleep! She has to be dragged kicking and screaming to a hairdresser though (which is evidenced by her nearly waist length curly hair)!

Kate, that's awesome for your boy! This country really needs a dental scheme for those of us who can't afford the visits - one where you can actually choose your dentist so you can get one with gentle hands and a supportive attitude!

Linda, obviously a woman after my own heart! I'd be happy for the Grumpy Old Man to take the boys to the dentist, but he's also afraid of transferring his stress to them. A friend once offered to take our kids - I think she was quite horrified they hadn't been!

I can understand why that would leave you traumatized.

I definately need to go to the dentist, but have been putting it off. But to be fair I'm more scared of the cost than anything else.

i think we all have a dentist phobia! Who has ever said... ohh I love the dentist! With that being said, I am grateful I have never had to have a horrible and painful experience... yet... x

I have dental phobia too. Fortunately the last time I went it wasn't *too* horrific. And my new dentist is lovely-and young and a but cute which helps ;)

Jess - yes, the bit is at least as scary as the pain, and often a lot more painful!

Tahlia - I'll send you my best wishes for never having a negative experience at the dentist. I hear there are many good dentists these days and that they're found also sorts of ways to be more gentle. I just need to get over my phobia!

Jayne - a cute dentist would probably help a lot!

I hate the dentist! This is due to bad childhood experiences. But I do love my current dentists and the kids do still. But still ... dental work sucks.

Ouch! I have a fear of dentists too, but not from a traumatic experience like yours. You poor thing.

I haven't been to the dentist in about 8 years. I'm a wuss when it comes to the dentist. I need to go though, and take the kids so they can see that its not so bad *cough

Lots of people seem to be putting off going to the dentist - maybe we all need a support group!

Well, looks like almost everyone have dental phobia and most of it are due to bad experience with the dentist during the childhood. The dental field has improved so much that the dentists can make the patients feel comfortable and less pain or no pain at all. Moreover, you will not a bad experience if you see the dentist in the early stage of the dental problem. There are some good dentists as well so you do not need to get scared off the dentist.