And before you start looking for your lollybag, let me just clarify that I'm not planning a party.

Do you ever have mornings where by, oh, I dunno 9am, you just know it's going to be one of those hit and miss (mostly miss) kind of days.

You feel a bit like you've been blindfolded and spun around three times and now you're expected to pin the tail on the donkey, and not some innocent bystander?

One of those days where you're not quite sure if people are trying to have a go, or just have a really badly misplaced sense of humour for this early in the morning?

This morning has been one of those mornings. I'm just not comfortable in my skin, I feel like I'm a parallel universe where things look normal but something is just not quite right.

I've been playing a game on Facebook, and it's one of those games where you pass it on others and they play too - if they want. It's a game where the aim of the game is to be a bit ambiguous but eventually it will all become clear and people are supposed to just have a bit of a laugh and be reminded of some important stuff.

One of my friends on Facebook decided to play along and within seconds one of her friends had come along and told her off for a) spamming people (man, it's a status update, if you don't care for it, just move along) and b) trying to trick people (really? she wasn't asking anyone for money, or lying, she was being ambiguous because that's part of the game, don't be a party pooper). Of course, this person straight away spoiled the fun. To what end? Who knows. To show superior intellect? Yes, well, you missed the donkey there, mate.

In another incident, a parent of another child at school asked if my child could have a sleep over on the weekend. I said,"Sure, if you want him, you can have him!" to which she replied, "I'd rather not have them both, but there you go!". Maybe she misheard me and thought I was suggesting she take a brother as well, or maybe she meant her child and my child as "both", I'm not sure. Maybe she hoped I'd actually say, "Oh, actually he can't this weekend, we're going base-jumping." Again, I have not idea, but I was left wondering why she asked if the child could sleep over if she didn't really want him to.

The thing is, on "pin-the-tail-on-the-donkey" days, you can't quite be certain who is having the problem. Is it really the other person, or is it you (by you, I mean me, of course - don't want to miss the donkey there). You can stew and brew and wonder if the world just doesn't like you, or you can do the following - and this requires a little preparation...

Find something that makes you smile and centres you. For me, it's photos of happy things and times in my life - because I'm a highly visual person (ironic, hey?), and just drink them in (I suggest if it's alcohol for you, start with something light incase it doesn't work straight away). 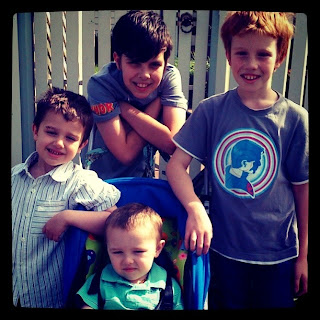 This morning I've been looking at this photo I took of the boys on the weekend. As I have "pin-the-tail-on-the-donkey" days semi-regularly, I tend to plan ahead and I take lots of photos that make me laugh or make my heart swell, just for these kinds of days...
Sometimes, it can take a while for the blinding fog of these days to lift, so make sure you have a surplus of happy, grounded, spirit-lifting memories to focus on until the importance of those hit and miss (mostly miss) moments starts to melt away like grease in hot soapy water! 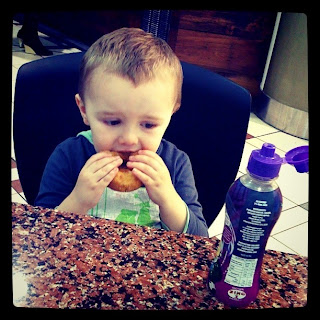 I took this photo yesterday when Ari and I had a donut date. Donut dates are a tradition that go back many, many years in our house. Just the Grumpy Old Man and/or I with one or two of the boys - it's cheap and it makes us all smile! As I said to a friend yesterday,


Donuts are delicious, they're really very good, not everybody likes them, but everybody should!

With a bit of practice, you'll eventually get that tail on the donkey, and the parallel universe will disappear and your skin will fit again - believe me, I have experience, it always works out in the end.

Oh yes I've had those days! I always try to just write them off and console myself with a nice hot cup of tea and a "whatever, it will sort itself out(meaning I will sort it out) tomorrow!

ive had those days! Days that are usually put to the back of my mind or they make me cranky!

something to make you laugh and smile is always good on these days :) xx

lol I think I am a walking billboard for them days lately! My way out is music... seems to make me smile and sometimes even scary dance [when nobody is home!].

Oh I can't stand it when you aren't quite sure what someone means, and then it just goes around and around in your head!

I love your Donut Dates - what a great way to re-focus on the things that actually matter :)

I know these days. You describe it so well Sif. I'm really enjoying your writing :)

Cups of tea and music - though maybe not at the same time, not with my music anyway - are both great ideas!

Also, as I did, call a friend! Preferably one who is not likely to add to the feeling, you know that friend who tells you it's not you, it's definitely EVERYONE ELSE and have a laugh!

These days are reasonably regular around here, you just feel out of sync with other people and the more you try, the worse it gets.
Boo to the kill-joy on facebook too, really? lighten up!

I just dont get people sometimes? Why can't everyone just be relaxed and calm? Getting offended over FB games just means you have too much time on your hands. Seriously, move on!

Hope today is better for you!