Linking up with Kate Says Stuff for Thankful Thursday.

When you live in a relatively small house with five other people and four of the other people are age twelve and under, you can pretty much expect that peace and quiet is a rare commodity! How did that saying go? Silence is golden? The person who said that must have been a mum of many!

Sometimes the Grumpy Old Man and I retreat to our bedroom, yes, in the middle of it all, in the middle of the day with the kids all chattering away in the lounge room. We got to the bed and just soak in the meagre quietude that can be found there, at least until one of the boys realises we're both A.W.O.L. and takes it upon himself to orchestrate a search and retrieval campaign...

There are times when we can get complete silence and I'm very thankful to those times for the restorative affect it has on my ability to parent with a moderate level of sanity.

Occasionally, the Grumpy Old Man or I will "gift" each other solitude by going out with all the boys on our own and leaving the other one at home for a few hours to just sit and stare at the walls (if that's what we want to do - and it is more often than you would expect!).

I also get a chance to sit in silence most evenings when the Grumpy Old Man takes Ari to bed. I'll get the other three into bed, and then I have an hour or so of complete silence because the GOM will often drop of himself while "simulating sleep" in order to convince Ari that it's nigh-nighs time. I often sit in low light and listen to the fan on the gas heater whirling (or purring, as I like to think of it).

Recently I've discovered that the Ari lad - who is very boisterous and loud when his brothers are around - is quite the lover of solitude between the hours of nine and three! He just potters around, plays with his Duplo, reads books, watches Doctor Who or Waybaloo (because, as you know, those shows have a LOT in common; foreign lifeforms, nonsensical timelines, and spinning and floating in the sky). I often let him play around on my iPad, as well (don't tell his brothers, I'll never hear the end of it!), though this usually leads to spending part of my evening ungrouping my apps...

Today he was very quiet, and then I sensed he was just around the corner from my computer, so I tip-toed over and took a peek, and there he was lying on the floor in the doorway between the kitchen and the hallway. He was gazing up at the ceiling and singing some little tune to himself. 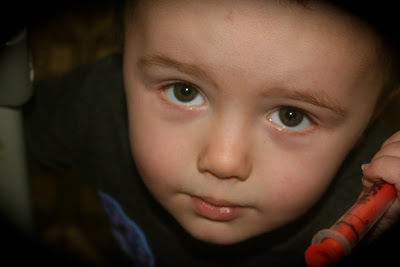 Every now and then he'll come up to me and we'll sit down together and have a hug and a little chat, and a sing-song (ye gads, I sound like a freaking Kleenx ad now!), and then he'll potter off again.

At about three o'clock he toddles over to me and says, "Okay then, let's go put the boys up!" (pick the boys up from school)

As I get my shoes on, he'll ask, "Hand?" which indicates that he wants to walk up to the school and he's agreeing to hold my hand all the way there. I'll lock up and we'll leave and chat on the way up to the school. It's like a dream!

As soon the boys come out of class, he becomes "with my boys" Ari and the quiet boy will disappear until nine the next morning. 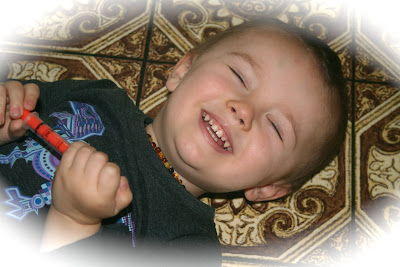 For the hours between nine and three though, I am thankful for such a happy little boy who likes his own company and understands the value of silent togetherness!
at September 08, 2011
Email ThisBlogThis!Share to TwitterShare to FacebookShare to Pinterest
Labels: Family life

ahhhh Sif- I read this as I try to steal a few moments of solitude for myself :)... it hasn't worked I hear the search party now :).

Ari sounds similar to Evie she is such a quiet little thing most of the time when it is just her and I at home (and when we are out and about or in the company of strangers) but with her brother she is full steam ahead.

I really do think those quiet moments (which are usually when they are all in bed) are what helps me get through the next day. My kids find me wherever i go even in the toilet. lol Sounds like some special moments with Ari :)

Peace and quiet is quite priceless isn't it? Nothing like that moment when they are all asleep.

The group dynamics is what gets you. Bailey and Bridie on their own at the shops are great; together it is a nightmare. I love seeing their friendship, but I equally love enjoying them on their own.
Your Ari sounds like a darling, and he is so very cute!

Thanks for following me by the way! :)

My small boy is the same (but for different reasons LOL)... I think even my company gets too much for him sometimes and he sneaks away to one of the big kid's rooms to be on his own.

I never was a huge fan of quiet or solitude, until I had children ;)

Thanks for linking up :D

Sarah - the quietly independent one's are wonderful aren't (I do love all my kids, but this is a special gift A gives me that my other didn't - it's his unique power!).

Lifeasmummymax - I know, I might as well not have a door to my loo! It does get a bit better as they get older, though - I find...

Jess - exactly, I don't mind taking one of them to shops with me, even Ari (who has a tendency to run off when with his brothers) walks by me and "helps" and is delightful!

Kate - LOL, I totally relate to not being a huge fan of quiet or solitude before kids. I mentioned that to the GOM and he replied, "Imagine what it is like for those of us who always LOVED quiet and solitude - and then had kids..." LOL.

Aww I love those little moments where my hubby takes my girl out on his own too. Precious moments :)

Seriously, what is it about grouping apps on the ipad. I seem to spend hours fixing the groups after Mr Magoo has "organised" them into groups.

Oh I hear you Sif. The only peace and quiet I get from anybody is between midnight and 3am in the morning. Ahhhh, my blissful hours!

More so lately, Ella has taken herself off to her room for some quiet play, leaving me to my own devices! But mostly, she does like to be close by.
I relish in those moments of a night time, when the kids are in bed, hubby is at a meeting and it's just me, the TV on mute and the laptop! It's bliss!

Ari sounds like a little sweetie. It's funny how they are different when not with their siblings. The other morning CrashGirl was at Kinder and CrashBoy's Kindergym was cancelled. It was the first time in ages when it was just me and him hanging out. He was so peaceful and calm. As soon as his sister was home, it was back to being an antagonising terror! I really liked last Monday morning :)

That's lovely! (although it does sound a little bit kleenex-y) it's great to have those nice days with your little ones. He sounds like such a little sweetie :)

awww he sweet is your lil man?
My guys are past that age (thankfully)...

Ari is adorable , thank goodness you get some quiet boy time. Boisterous all day can be so physically draining . I have no where to hide either. My boys ungroup my apps too...worked out how to stop deletes.