Today marks the beginning of the second week of the school holidays - the first week just whizzed right by in a blur.

We're still waiting to hear back from the Grumpy Old Man's supposed new employer. They're undergoing some sort of registration review as well as some other official review and this is apparently why they haven't called him in to work out his schedule. It's been almost two weeks since he finished work placement though, so we're a bit antsy - it would be good to see income, you know,  coming in. The latest update (just in) is that we might hear by Wednesday.

Daylight saving started on the weekend. Yay for brighter evenings! I might actually start walking once the kids are in bed. Or not. This also means more difficulty convincing all the children it's actually bedtime.

All our boys go to bed at 7pm, yes, even the twelve and ten year olds. I realise this will seem very early to most people, but it really works very well for us (us being, mainly, the GOM and I who are usually exhausted of parental adoration by about 6.30pm). Occasionally they go to bed later - on Saturday nights while Doctor Who is on they stay up to watch Doctor Who and Doctor Who Confidential (Saturday's episode was a riot, by the way, if you're not a fan, you're totally missing out!), and so go to bed at about 9pm. Even with the 7pn bedtime, Lukas will resist getting up in the morning (gods help us in three years time when he officially hits adolescence). Erik usually gets up very early and potters around in his room until 7-7.30am.

All that said, with increasing light, I'm thinking I might have to say to the older boys that they can read quietly in their room or something because they don't have block out blinds and if they're awake anyway - just quietly, I suspect they do this anyway. 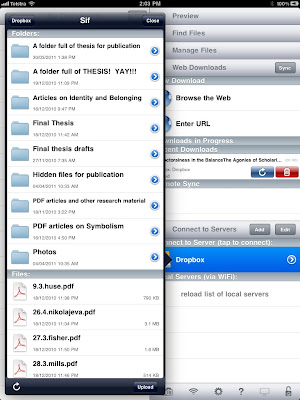 I started setting things up for researching and writing last night. Downloaded Dropbox onto the iPad, also downloaded a PDF reader (Good Reader) which is supposed to make reading and annotating PDFs a breeze (of course, that would be after I learn how to use it).

Had a bit of a shock as I signed into Dropbox and realised all but one file I'd uploaded wasn't there. All my Masters thesis work (which is backed up on disk as well, thank goodness) and the best photos of the boys from this year, and all the research mum had shared with me gone!

In a panic, I called mum, but her phone battery was almost dead and died the moment she answered the phone. Call s-dad's mobile, but it went straight to message bank. Then it dawned on me to try and get mum via Skype on the iPad, and voila!, there she was! Turns out when her phone cut out, she tried to call me via s-dad's mobile, but found it was also out of charge and so she got on Skype to call me. Great minds and all that - and how much do I love technology? (that is a rhetorical question, by the way)

After a bit of toing-and-froing brainstorming the problem of my missing files (which she could see in her Dropbox because I'd invited her to view them all last year), I realised I'd started an account using my alternate email address when I first joined Dropbox, and then I'd started another account with my main email when I got the new computer, the only difference between the two accounts was the name of the ISP, even the password was the same on both, how embarrassing.

Realistically, I don't know how much I'll get done this week, what with holidays being on, but hopefully I can start to sort through and prioritise what to reading first, at least.

In other news, iPod Touch Fever is still strong in these parts. After an initial period of quiet satisfaction over how happy the kids seemed, we've now entered that stage of the game (no pun intended) where they are arguing over who has entered who's Monster Pet Shop and took photos (screenshots). Argh! Seriously? So, out came the lecture about no one really owning anything on the internet and how you can't dictate anything much of what other people do once you've given them access to your account. This morning though, I've had to confiscate Lukas' iPod after he threw a fit over Bryn sending him egg requests for eggs he doesn't actually have. Yes, iPods have certainly added a new dimension of parenting issues to this household.

What is the silliest thing your children have argued over since being introduced to technology?

at October 03, 2011
Email ThisBlogThis!Share to TwitterShare to FacebookShare to Pinterest
Labels: Family life

The CrashKids argue about which one of them gets to whack stuff with my iPhone. Thank god they haven't discovered my iPad yet! My poor, poor iPhone.
Ps hurry up iPhone 5 or whatever you're going to be called.

ohhh the ipad... i just currently read stories having not experienced them yet... in time though i am sure..... x

I didn't know until just now how much I NEED a monster pet shop.
My girls go to bed at 7.30pm and read until 8.30. The teen's friends are all still on FB late at night, but she needs her sleep even more than her little sister.

Glad you managed to find everything, I know that sinking feeling and panic soooo well!

Also really pleased you think you may find time for WoW again this week, I missed you x