Medical advice: It works both ways.

This morning I filled out forms for Erik to go on an overnight excursion to Sovereign Hill with his class. As part of the many, many forms, I needed to fill in a medical information and release form. Besides not having a family physician (mostly, because we've attended a number of local clinics, each comprising a pool of GPs who are assigned randomly to patients), the form was quite straight forward, medicare number, ambulance membership number (we're covered by Centrelink), private medical insurance number (ha! as if we could afford one of those)... And then the question, 'Year of last tetanus vaccination'. Well, never. Moving right along...

Finally I had to sign the part of the form that stated, 'I consent to my child receiving any medical or surgical attention deemed necessary by a medication practioner'.

We've never had this form before. The boys have been on camps where they are away for two nights and three days - Lukas was just on such a camp two and half weeks ago - and we didn't have to filled in this form. So, why now? It got me thinking. Sovereign Hill is a village that emulates Olde Worlde living; it's old fashioned. Lots of stuff there might be rusty. There is a lot of dirt (unlike our pristine home, mum, stop laughing). If Erik were to cut or scratch himself even, they might be worried that he might contract tetanus.

The fear is mostly unfounded, in that tetanus cannot live in an oxygenated environment, so not only would the wound need to be deep, but it could not be bleeding, as blood contains oxygen. So, people at risk are mostly the elderly or those with poor circulation due to conditions such as diabetes. Erik fits neither of these categories. Just recently he managed to take a chunk out of his chin in a fall. The nurse at the medical centre asked if he had had tetanus, I said he hadn't but the wound had bled profusely (she could see that for herself), and her response was, 'Yes, people tend to be over-cautious about tetanus these days.'

Anyway, after humming and hawing a while, I amended the form and gave consent to 'any medical or surgical attending 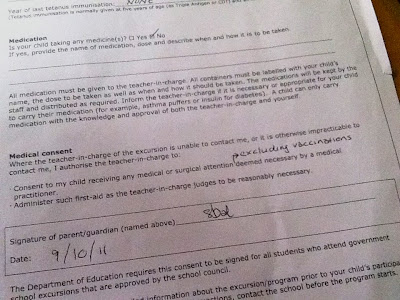 One person on Twitter said where he lived (in New York City), children were not allowed to attend school without being vaccinated. I said in Australia, refusal to vaccinate is considered a human right. He asked why we weren't vaccinating. I said being our Paediatrician who specialises in immunology recommended we didn't based on the immune-overload reactions he had observed in our first two children (which have not occurred in our subsequent never vaccinated children). The guy said he philosophically disagreed with our Paediatrician and would be interested in seeing studies that linked vaccinations with immune-overload.

Oddly enough our Paed. never handed us a bunch of studies to read. He simply assessed our children as individuals and advised us based on his assessment of our children.

The guy said he (and the American Medical profession) would love to hear about the other side of the issue. Which I guess was his way of saying our Paediatrician was wrong.

It occurred to me that I'd seen this very argument before. Except the last time I saw it, it was a parent who had vaccinated because their Paediatrician had recommended they vaccinate their children so their child would not have to suffer. Here I was saying our Paed. had recommended we not vaccinate our children (n.b. our children, not anyone else's children) so our children would not have to suffer. This guy, on Twitter, with no medical qualifications (as far as I can tell) and certainly no knowledge of our children's immunological status, 'philosophically disagreed' with our medical professional who specialises in children and immunology.

There are many stories of doctors who went against the medical model without scientific evidence - just anecdotal evidence - only to be vindicated down the track. Here is one.

Despite various publications of results where hand-washing reduced mortality to below 1%, Semmelweis's observations conflicted with the established scientific and medical opinions of the time and his ideas were rejected by the medical community. Some doctors were offended at the suggestion that they should wash their hands and Semmelweis could offer no acceptable scientific explanation for his findings. Semmelweis's practice earned widespread acceptance only years after his death, when Louis Pasteur confirmed the germ theory. In 1865, Semmelweis was committed to an asylum, where he died of septicemia, at age 47. (source)

If referring to medical opinion is valid for parents who accept that advice and choose to have their children vaccinated, then why should it not be equally valid for parents who follow medical advice and choose not to have their children vaccinated?
at October 10, 2011
Email ThisBlogThis!Share to TwitterShare to FacebookShare to Pinterest
Labels: Family life, Thinking

How did you go with the form? I was scared TO vaccinated, scared NOT to, in the end we did, and, knock on wood, N has been fine. It's really tough to know what to do as parents, so you do what you think is best, at the time, and hope for the best.

Yay! A comment on this post - vaccinating or not to is very controversial and I think a lot of people would rather not comment at all than risk saying "the wrong thing", so thanks for being brave!

I haven't put the form in yet, haha!

I totally get where you're coming from. The information on both sides of the argument is scary, and mostly written in a way to frighten and confuse parents. You and I feel much the same way about it all (I think many parents do).