This month I'm taking part in 'Adopt An Indie' over at Bookbags and Catnaps. I adopted The Burn by Annie Oldham and posted an email interview with Oldham a few days ago. Today, I'll review The Burn and share a couple of very brief thoughts on the dilemma of independent publishing. 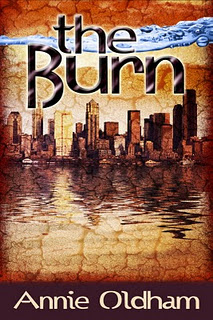 The Burn is full of nuclear fallout, roving gangs, anarchy, unreliable plumbing. That’s what Terra’s father tells her. She has lived her whole life in comfort in a colony at the bottom of the Pacific Ocean. She hates it. And she would pay any price to leave. But when Terra finally escapes the colony, she finds out her father is right. She finds a group of survivors that quickly become friends, and every day with them is a race for survival. But then she witnesses and commits unspeakable acts, and she must decide where her loyalty lies: with the colony she despises or The Burn, where every day is filled with nightmares.

Aimed at the Young Adult market, this book is an adventure with some self-discovery thrown in along the way. Themes of identity and belonging are explored as protagonist Terra, a 16 year old girl, leaves the boring safety of her post-apocolyptic underwater home and escapes to The Burn; the remnants of Earth after World War III.

Up on The Burn, Terra falls in love, learns to shoot a gun, and discovers what makes her unique, but also worthwhile as a member of society.

The Burn is what is known as 'a clean read', containing no sex or swearing. Violence is relatively tame and infrequent.

I chose this independently published book for review because it is very close to the sort of stuff I personally write and I was keen to see how it came across is a small press/self-published ebook format. Having mostly heard negative comments about self-publishing I really wanted this book to be an outstanding example of the legitimacy of self-publishing. I wanted it to be perfect.

It was not perfect.

The story is supposed to take place 100 years after the advent of World War III where much devastation occurred, but the freshness of the War lingers heavy in the air and it feels as if it has only been 20 years or so rather than entire century. I also found several copy editing oversights (One of the great difficulties of editing one's own work, as I've learned from experience. Fresh eyes should never be undervalued), A few passages felt stilted or rushed.

As I was reading, I worried about how I would go reviewing this book and recommending it with these issues cropping up. Of course, I've read many mass produced novels with copy editing errors and writing that made me cringe. Watchers of The First Tuesday Book Club on ABC will know that even classic novels and best sellers come under critical review, but in modern times, no book comes under greater scrutiny and expectation than an independently published book.

I shouldn't have worried.

Despite the problems mentioned above, I really enjoyed reading The Burn. Annie Oldham has a true talent for story telling and the ebb and flow of this narrative was enough to keep it moving at an engaging pace.

I most enjoyed the dialogue - which is the part of a story which must work for me to remain engaged - and Oldham's skill at writing dialogue shines in this book.

A couple of descriptive passages (for example, Terra experiencing soil and the warmth of the sun on her skin for the first time) were particularly well written and stand out for me now that I've finished reading the book.

Would I read more of Annie Oldham's work? Yes, I would! I've already bought and started reading her other novel, Dragon Sister. At the end of the day, engagement is what a reader wants from a novel and The Burn is very engaging!
at November 15, 2011
Email ThisBlogThis!Share to TwitterShare to FacebookShare to Pinterest
Labels: book reviews, writing

Thanks for your kind words, Sif. It's a lot of work, this indie thing. Hearing that readers enjoyed my story (and also receiving the helpful feedback) is one of the best parts of it. Thank you.

Thank you for commenting! I LOVED the passage where Terra was in field #3, it actually made me grin - and not many books have done that recently! Beautifully written!