Well, I know you all want to know how I'm going, right? You couldn't sleep last night, just thinking about it? No? I don't believe you!

So far today I've brought the tally to 1902 words, which is okay, I guess. To get to 50K words in 30 days, we have to average something like 1,667 words a day - not to put too fine a point on it. So, I'd better pound out a few more words before shut-eye tonight.

Was given a heads up about a program called FocusWriter which you can download for free here. It's nice, I loike it. I downloaded some pretty rainbow coloured images to use as backgrounds and so this is the distraction free writing room I have for NaNoWriMo at the moment... 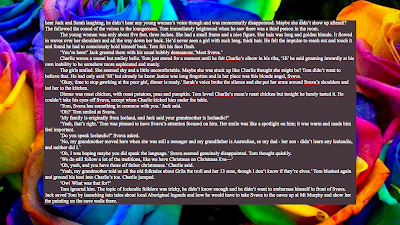 This is the basic screen - I've modified the background image and also the colour of the foreground panel and the text type (this is all fully customisable). 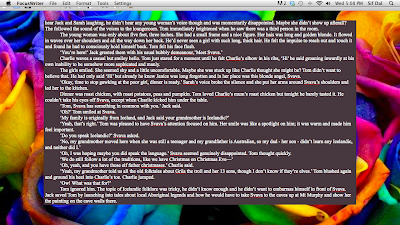 Then if you scroll your cursor over the top edge of the screen two menu bars appear. The one underneath (partially obscured here) contains major functions such as 'open', 'save' and 'cut' and 'paste'. The top menu features more functions in drop down menus. 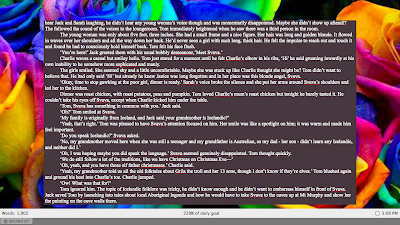 If you then scroll over the bottom edge of the screen another bar pops up which tells you how many words are typed in total (on the left there), what percentage of your daily goal has been reached (in the middle) and how much time is left from your allocate time, or if that is not set or has elapsed, what time it actually is (on the right).

You can customise daily goals, times etc. in the drop down menus - I haven't played with that yet. This is a really nice, easy-to-use writer's room program that I used to procrastinate from writing with today (well, until I'd set it up, and then I went on to write 1850 words, so I guess it works quite well!). Oh, and my favourite feature - you can make it sound like a typewriter when you strike the keys on your keyboard (and it does that old-fashion return carriage sound)! How awesome is that? No, truly!

I checked out the NaNo forums today to see how others were going. There is such a fascinating mix of writers out there. I had to check out the overachievers thread (who wouldn't want to know what a NaNo overachiever is, right?). If you think 50K words in 30 days is crazy, you need to know there are people out there in NaNo land aiming for 100K and 350K and all sorts of totals in-between, I kid you not!

More power two them, but I wonder if you can publish books in excess of 200K words? Maybe they are writing more than one book? I won't be an overachiever. I can't really write during the day because of all the distractions - which probably sounds funny to you as I routinely write several hundreds words (minimum) most days - but for an ongoing plot, I need silence and solitude, which is why I didn't get anything written yesterday - Cup Day, public holiday, kids home...

Oh, I just remembered - with all this writing excitement - I totally forgot to ring my poor, sick mum, who is laid up at home with shingles, bless her. I'll call tomorrow mum, promise, really!

The government department I sent the application in to on Monday, sent an email today to confirm they'd received it, and said they'd be in touch soon. Hoping that's good.

The anti-descrimination commission also sent the GOM a letter today confirming they're received his complain.

And time rolls on.,,
at November 02, 2011
Email ThisBlogThis!Share to TwitterShare to FacebookShare to Pinterest
Labels: NaNoWriMo 2011, writing

Thanks for the tips! I'm 1200 words in as of yesterday, I can't write until I get home from work.. I'm a bit worried that my story is spectacularly dull but I overthinking it was what slowed me down last year so I'm just going to go for it this year

Sounds like a great program will go and check it out, I only got out a mere 436, I have sick kids, not overly sick really just too sick to go to school. Hope the words keep on flowing for you

Alice, well done! Don't overthink it, if you finish and go back and still think the first 5 pages are dull, you can always edit. December and onwards is for editing, for now just write. If you want to buddy up on NaNo, I'm Sif Dal :).

Rhianna, you did better than me yesterday when my kids were home. I can't write with a little person at my elbow... Are we buddied on NaNo?