By Way of Initiation: The Making of a Comic Book Geek...

Ever since the boys were quite young, I've been interested in the idea of initiation. I guess it started when I heard my mum-friends of little girls talk about what they were planning for when their daughters first had their period. In the circles I travel, honouring a girl's first period is kind of a big deal. It's considered a bit of a celebration of womanhood and something a mother can share with her daughter to ease any embarrassment or concern on the daughter's part. It's all good, except I don't have a daughter.

So, then I started thinking about initiation for boys. Of course, boys don't have an event like a period which can pin-point the advent of manhood. Possibly shaving for the first time? That could be a bit hit and miss as some boys don't seem to need to shave until very late in the piece (though, actually, I don't think any of my boys will suffer a lack of facial hair if any of the men in my family are to go by).

Then there is the thing that, really, a father, or another man or men should run the whole 'Welcome to Manhood' shindig. It's not as if I can lead the way for my boys on this particular path (no matter how manly I feel at times). I have to admit, I haven't had a lot of faith in the GOM taking the lead in any kind of initiation rite - as I mentioned here a year ago.

Then last weekend, one of the GOM's oldest friends had a farewell party because he's moving interstate. These men (the GOM, his friend and others) are part of a group of friends who got into comic books almost forty years ago in and around Melbourne, and one thing most of the men in this group have in common is that this one mate (Greg) took them all under his wing, so to speak, and introduced them to the world of comics beyond what Marvel and DC comics had to offer...

My brother became part of this group when he moved to Melbourne twenty years ago - or so - and it was through Michael that I met the GOM. As it turns out, one of my closest friends used to house share with another one of these blokes back in the 1990s as well - before I met her, so the middle aged comic book geek boy tendrils stretch far and wide in this city!

So, anyhoo, one of the old boys is soon leaving town to go live interstate and in honour of his leaving the comic book guys of Melbourne got together last weekend at a pub in the city and gave him a send of. They put together a mini-comic featuring tales of how some of them first met Greg and were introduced to more drawing and writing talent than they'd even known of before. 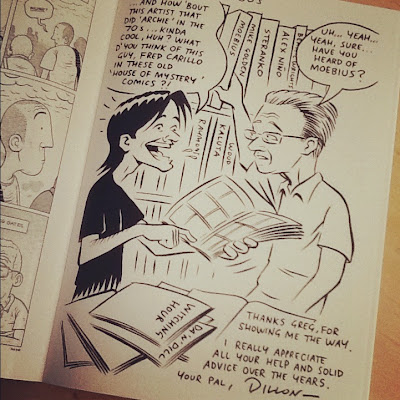 As it turned out, the GOM and I agreed this farewell would make a great first initiation for Erik into the world of grown men (don't laugh, yes, they are comic book geeks, but many of them are actually also partners and dads and most have jobs outside of comic books shops, too - though we've also had a laugh at how similar some of them are to the fabulous characters in the Big Bang Theory, as well... Yes, we do know a few Sheldons, Howards, Rajeshs and Leonards.).

Erik has long shown an interest in drawing, and while parents of a previous generations might have tried to encourage their artistic children into fine arts, or architecture or advertising maybe, we're actually going against the grain and would love to see our boy try his hand in animation and graphic novels.

No, there isn't a lot of money in that field - well, actually a couple of our friends have found fairly solid work in graphic novels and animation, actually, but like writing, they do tend to be exception - we've found a great camaraderie amongst comic book geeks.

So, on Saturday afternoon - amidst the chaos that was happening around here in relation to mother-in-law's current heart issues - the GOM and Erik headed off to the city to say farewell to one of the best-liked men in the Melbourne comic book scene.

The reception Erik received was just lovely! The guys welcomed him into their small group (there were about 50 blokes in attendance, along with sundry partners and one or two children, I hear), he was shown some local comics - including a glossy which a couple were handing out for free to everyone (see below) and asked if he thought he might have a go at tackling comic art. He'd met some of the guys before, but not all in one place and so he had the opportunity to see the guys in their 'native environment' and be 'one of them'. 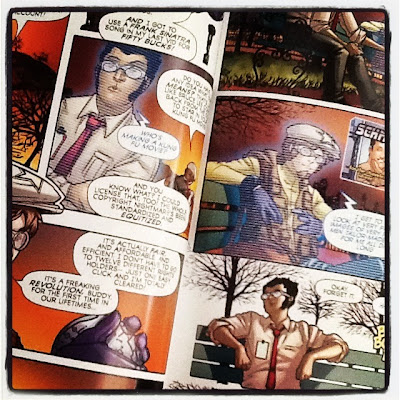 And I guess this is what initiation is these days. Not so much sitting out in the dark alone and testing one's courage as finding oneself invited into the world of grown ups as an equal and potential contributor. I have to say I felt a pang of pride at watching him go to this special edition of the monthly comic book meet. It was also sort of strange as he is growing to look more and more like his dad, but on the day he chose an outfit which could have come straight out of my brother's wardrobe when he was the same age. He is certainly growing up and if he grows up to be a comic book geek, it won't be the worst thing in the world! 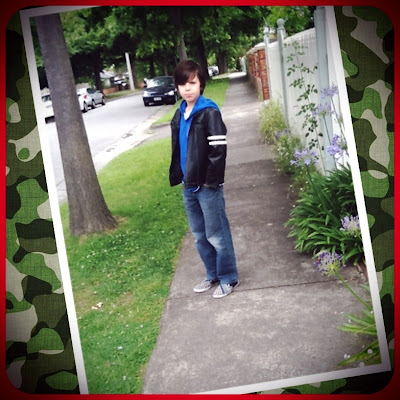 at December 05, 2011
Email ThisBlogThis!Share to TwitterShare to FacebookShare to Pinterest
Labels: Family life

Comic book and game books are classic for all the growing up guys. I mean I hardly can think of any teenager who does not like that kind of stuff.

That's so funny because I would had definitely said the same thing up until about 10 years ago, but these days I don't know any other kids who are into comic books - they all seem to be into games (which Erik is into as well, only his parents are totally lame and won't get him any consoles besides his iPod Touch).

I imagine this is a bit like any interests, kids from different areas are interested in different things...