Cramming a week into one post... (lots of fun stuff!)

I have not had time to blog this week. I actually have a 40th birthday blog sitting in draft form in my database but as the days pass I find myself less and less inspired to complete it. Let's just say I turned 40 on Wednesday and I think 40 rocks and am so happy to be here! Yay me!

Also, let's say I made a collage of a bunch of photos of myself from over the years and discovered I smile a lot and perhaps I shouldn't... Well, maybe I should smile but with my mouth closed; it looks more dignified. What do you think? 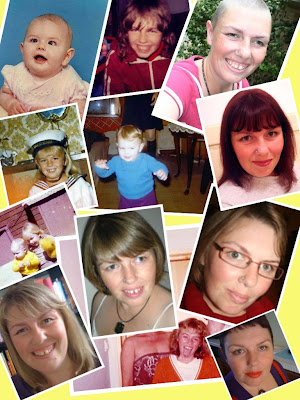 December is a crazy month and I love it!

This week we had the boys' school Christmas parties and disco and I decided to try making these mini puddings I read about over at Tina Gray {dot} Me. 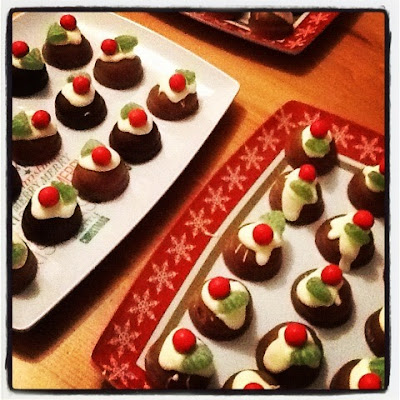 From all accounts these mini puddings were a hit in each class room. I made 15 for each class (so 45 in all) and they disappeared in minutes - Thank you, Tina, for sharing this great idea!

That's not the only Creative Christmas stuff I've been doing though...

Remember the ornament crochet links from the other day?  Well, I went out and bought white and silver yarn and made up some more! Let me tell you silver yarn hides a lot of mistakes. Which is just as well because it is also the cause to lots of mistake! By the way, you could totally crochet pot scourers out of that stuff... I think these look very lovely on the tree - home made and imperfectly perfect! 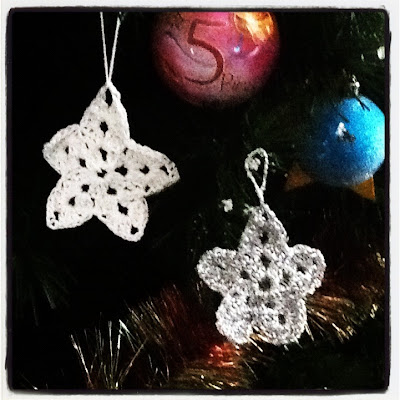 I was also inspired to crochet some bunting. Originally, I had planned to crochet specific christmas bunting in red, white and greens, but then found time and money limitations led me to some cheap and very cheerful yarn at Big W. So, I just made bunting for sake of itself because it makes me smile (luckily, the menfolk in the house quite like it too - luckily, I say, because I'm planning to follow it up with cushions and afghans in the same bright colours...). 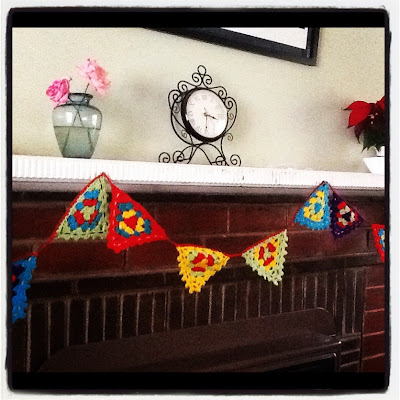 I originally found this bunting idea at my current fave blog Attic24.  The writer there, Lucy, seems to love rainbow colour schemes as much as I do and so I've been spending inordinate numbers of wee hours pouring over her posts about crocheting! The pattern for this bunting can be found here - the only modification I made was to do a running stitch of a contrasting colour before the picots because I felt the last block of colour was too "thick".
In other news, we're forging ahead with our plan to create a space for mother-in-law (and other guests when she isn't using it) to stay in at our house when she needs to. This is so that if for some reason she is not 100% well, or is feeling a little bit lonely or whatever the reason, there is a bed for her to stay here at our house.
We've found it quite a stretch for the GOM to be staying at her house night after night in the wake of her stent operation, but of course, she needs the support and we are more than willing to provide that support. It occurred to us though that should she need this kind of support when the GOM is working nightshifts, it would be impractical for me to haul four children over to mother-in-law's house for the night.
A lovely friend has given me a set a bunks which can be divided into two singles, so we can put a single in what was - until this morning - Erik and Luey's room.
Erik and Luey's bunk has been moved into Bryn and Ari's room (though Ari still sleeps with us, he does have a toddler bed set up for when he is ready to transition into the boys' room).
Now there is a "spare room" of sorts. Erik's cloths and the boys lego and some other items are still in that room. Erik will probably still sleep in there except for when Nanna or others are using the room. It can also be used as a sleepover room for the boys and their friends.
We had to move quite a lot of furniture around to make this work including finding a new home for the Ikea Ivar shelves which had been in Erik and Luey's room. They ended up in the study where the old portable TV had been sitting the printer on it - this means Ari is not about to get into my paperwork anymore! 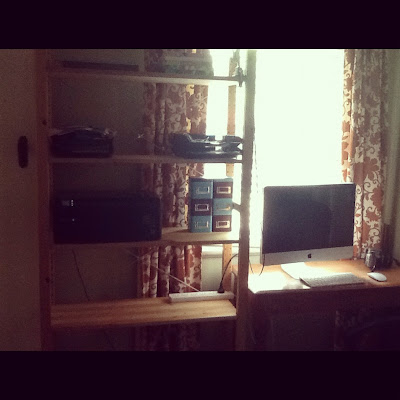 The TV stand was moved to the bedroom to be made into a concealed charging station for the iPods, my phone and the iPad. I have been charging them in the bedroom for a while (to keep them safe from little fingers) but was finding that people would send messages in the middle of the night, or notifications would come from apps like "Monster Pet Shop" and the devices would light up and wake me... So hopefully, being concealed, that will no longer be a problem.

One last thing while catching up on this past week...

We went present shopping for the boys yesterday. We have had specific presents in mind for a while - think Doctor Who geekdom - but knew from previous experience that we might find stockists a little short this time of year, so I did my research on Thursday and found three items in one store locally, but couldn't see the fourth so got the store assistant to ring another store for me and put the fourth item on hold.

Yesterday we set out to collect all four items, and went furtherest afield first up.

There is where I came across these pot plants in the middle of the shopping sector. 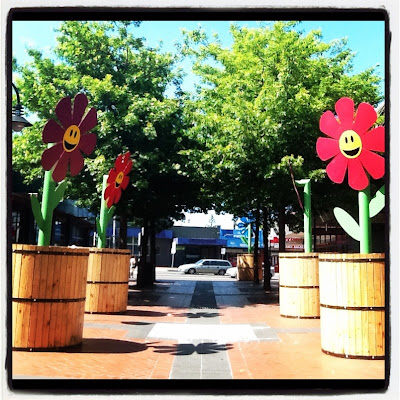 I just had to take a photo of them - they look so happy and so very out of place! I wonder about the person who created these and about the people who thought they would add a bit of something special to the area...

Got back to the local store only to find they had over a dozen of the fourth item in stock and we needn't have traipsed out to the other place. Mind you, if we hadn't, I would never have seen these peculiar giant smiley pot plants. Even the photo makes me smile.
at December 17, 2011
Email ThisBlogThis!Share to TwitterShare to FacebookShare to Pinterest
Labels: events, Family life, milestones

a busy week in deed.... those little cakes look yum yummo. Always a little chuffed when they are just demolished :)

What a week! Happy 40th birthday! :) Your mini puddings look great. 4 boys in one room? I'm not sure if I could handle that! Thanks for the link back x

Tahlia, yes, I love it when I make something for their class and it is well received!

Thanks for stopping by Tina, that was a great post and I just had to give the mini puds a go - they were so easy!