It's the second last day of the year! Tomorrow I'll do my usual New Years Eve ritual - although I'm not sure when as, for the first time in years, we're going out for New Year's Eve. Usually I start buzzing with new year's anticipation around about now. I'm usually hyped on the excitement of a new year full of new possibilities; the clean slate syndrome and all that. I'm usually sure everything will turn around at the stroke of midnight and all that has passed in the previous 12 months will be forgotten and no longer relevant.

This year is different.

It's not a bad thing, I don't feel depressed. I feel... I feel quiet. I feel reverent. I feel unattached. By unattached, I mean I feel as if I'm floating free in a deep, dark sea of space. I'm not pulled toward a desired outcome, I'm not pinned to a particular hope of a certain outcome. I feel that I've let go. I've let go because I'd finally accepted that I am not in control of my destiny.

Here is what I know as I float in the comforting dark blue ocean of space... 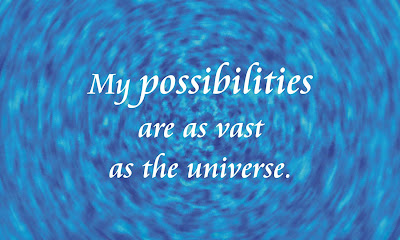 # I know I believe in destiny. I believe that despite having worked my best magic to make things be the way I believe they should be, all my work has been for nought because there is a destiny which will have it's way despite my [evidently limited] understanding of how things should be.

# I know I am not in control of my destiny. I can visualise the life I want all I want. I can repeat affirmations until I'm blue in the face. I can be positive and banish every negative thought from my mind and destiny will still run its course because there is a bigger picture which I cannot see and to get from point A to point C, I must travel through point B, whether I like the look of it or not.

# I know destiny will always be in my best interest - and this knowledge is what brings me peace as I surrender to it. Whatever happens, in the end I'll be exactly where I need to be (as I have been countless times before) and that will bring with it contentment. I look forward to that time!

# I know I could lay plans for 2012. I could plan to get my novel reviewed and submitted for publication. I could plan to for the next NaNoWriMo next November. I could make plans for when the Grumpy Old Man has his licence and a job and all the wonderful things we'll be able to do then. I could make plans to submit an application to do my PhD. I also know I've made plans like this for 2010 and 2011 and they just didn't happen for so many reasons which were ultimately beyond my control. So, I won't make plans for 2012.

# I know 2012 might bring no change whatsoever to our situation and this time next year the Grumpy Old Man may still not have a licence or a job, we might still be living in this house living week to week and being subsidised by mother-in-law. I know there is also the possibility that the Grumpy Old Man might finally get his licence in 2012, and we might finally have a car, and he might finally get a job that brings in enough income to free mother-in-law of the burden of supporting us. 2012 might be year that we put a nest egg together. 2012 might see us move from this house because the owners will be building townhouses in what is currently our back yard.

# I know that I know nothing about 2012 and I know that that is bringing me a sense of calm today because I know I am not in control, there is nothing I can't do to ensure an outcome one way or another, so I am free to just be.

# I know that freedom is a great gift and I am thankful to have finally accepted it.

Linking up with The Good, The Bad, The Unnecessary for Things I Know!
at December 30, 2011
Email ThisBlogThis!Share to TwitterShare to FacebookShare to Pinterest
Labels: Thinking

Great read. It sounds like you have quite a positive outlook on the new year. Hope things go well this year for you all. But glad you are free :)

"I know destiny will always be in my best interest" i like that... there is such a peace and freedom in that line, and I am glad you have found it! Heres to 2012!

I can feel your free spirit from your words, not bound by any resolutions or plans. And that itself holds a lot of promises because ANYTHING can happen!

May 2012 bring more blessings and happiness to you and your family.
Hope the license thing will work out too..

I love that you are releasing that which you can not control, what a wonderful feeling that must be. Fairy wishes and butterfly kisses to you for the most wonderfully magical year ever

Such a peaceful post, Sif. Like you, I believe you are and will end up exactly where you're meant to be.

Wishing good things for you next year xx