If I can bang out ten things in the next 35 minutes and get this post posted, then technically I didn't miss my 10 Things Tuesday blog post, right?

I was going to post 10 Points of Shopping Centre Ettiquette That Really Should Be Taught in School... but then I thought I might want to kick of the year with something a little more upbeat and positive... Even though we're only three days into this new year, I think I can find ten things that have made me happy this year already!

#1 In the very first hour of the new year it would have to be dancing in the front yard of a friend's house under fairy lights in a makeshift outdoors lounge room - I wish I'd take any kind of camera with me, they had it set up so beautifully under the trees with lamps and fairy lights and a leather couch and loud music! It was so much fun! As a good omen for the coming year (that's precisely how I choose to view this extraordinary event) we had a visit from a ring tail possum on the electrical wire above us. The picture below is terribly blurry, but you get the idea... This little cutie sat perched up above our party watching everyone for a good ten minutes while we all gawked at it and made clumsy attempts at capturing it's image on mobile phones (not mine, I had this photo mms'd to me)... It was all quite amazing and wonderful, really! 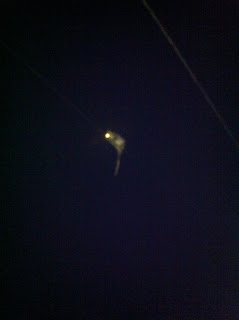 #2 Still in the first hour of the new year, walking the 15 minutes it took to get home with my little family, all smiling and together - finding constellations in the clear night sky!

#3 Deciding to join a couple of challenges to awaken my creativity with a photography and writing.

#4 Oh, writing! Writing 1100 words of my novel - yes, the same part for probably the fifteenth time, yet it was fresh and new to me. Meeting my old friends Thomas and Lily, and Svava again. Moving around in their world as if visiting a familiar holiday destination. Seeing the inside of their house again and noticing new nic-nacs I hadn't noticed on previous visits. I love this part of being a writer, all the travelling I get to do!

#5 Remember my story about being psychic and knowing I had to cut the grass before something bad happened - and then not getting to cut the grass and something bad happening... Well, I'd noticed I have a way for foreseeing bad things happening, but felt I was powerless to change them... Okay, well, that is changing! When the boys got their Wii for Christmas and I went to install it, I realised I didn't have enough sockets on the surge buffered power board behind the television. I knew I needed a bigger power board. Usually, I'd let my impulse to please the kids run away with me and plan to buy the new power board, but think I'll just let them play using a regular power board, just today, just until I get to the shops. This time I heeded my premonition about a power surge and got the bigger power board before plugging in the Wii. Well, within twenty four hours we had the biggest power surge we've ever had - we actually heard something explode down the road! The fridge looked like it might have died (it hadn't). I was so happy one of my premonitions paid off!

#6 When the fridge came back on after the massive power surge. At first it seemed like it was dead but about half an hour after reconnecting it, it sprang back into whirring life, yay!

#7 Finding a cheap nail polish that doesn't chip the first day I put it on - or the second, or the third!

#8 Ari sleeping in his bed every night, last night he even settled in his bed for the first time with me just sitting on the edge of the bed next to him. This has all sorts of added benefits which have made me smile recently (draw your own conclusions)...

#9 Sitting on the back porch for hours chatting with my brother as the cool change slowly moved in and sky clouded over and the humidity dropped several percentage points!

#10 Getting this post in before midnight, and thereby scraping in for Tuesday and meeting yet another commitment (if only by the skin of my teeth!). You will also see that I've posted todays 'photo a day in January' photo on the page up there. I haven't written five hundred words for today but I'll catch up tomorrow and as the songs goes, 'Two outta three ain't bad!'

What has made you happy already this year?

at January 03, 2012
Email ThisBlogThis!Share to TwitterShare to FacebookShare to Pinterest
Labels: 10 Things Tuesday