I made a commitment before Christmas to review Kleenex's Flushable Kids Wipes - when I was offered the opportunity to do the review I was feeling rather jazzed and optimistic that Ari (just turned three at the end of October) would soon be using the toilet like the big boys...

Yes, well, here we are in January, and time has been ticking by and I haven't done my review yet because Sir Poops-a-lot steadfastly refuses to eliminate without the security of his portable poop-catching paraphernalia (a.k.a a nappy - or for you Americans (and my 10 year old), a diaper).

Honestly, I've tried everything, I really have. He's had copious nappy free time in conjunction with lots of fluids, a [clean, empty] potty planted in the middle of our living area (much to the Grumpy Old Man's disgust), lots of talks about where wee and poo come from (much to every one of the boys' delight), promises of rewards; stars, stickers, lollies, trips to the park...  Not a single drop outside the confines of his nappy...

So, the wipes weren't getting much use, as you can imagine...

Then one day while we had house guests, we realised to our horror that we were on the last few metres of our very last roll of toilet paper. So, guess what I discovered? Yep, you got it - the 'flushable kids wipes' are great for mature botties as well! But, let's not dwell on that image, too long...

1. Some people call it toilet training, I prefer to call it toilet learning... Pot-ay-tos, pot-ah-tos, right? I find calling it learning reminds me that the child will have their own 'learning style', that they are active participants in the process and that they aren't - despite what my FIL told me years ago - just like puppies who can be  trained from six weeks of age (or an equivalent arbitrary human age).

3. Parents who's child is on the cusp of learning to use the toilet can talk about it for hours - literally hours - sometimes that talking involves tears of frustrations, too... These same parents are always on the lookout for effective tips and tricks so if you have some to share, or looking for new tips and tricks yourself, why not check out the Kleenex Mums site - they have a Facebook page and everything!

5. Some children do better if all other options are taken away. So far, all three of my children who use toilets now, eventually learned to do so when I set a 'no more nappies' date and stuck to it - they all learned to use the toilet the very first day (they were all four years old - I know!).

7. Sometimes even after they have learned to use the toilet you might wish they were still in nappies because some children just can't seem to master wiping and 'skid marks' are so so gross - not to mention smelly. (I have to say this is probably the main reason I would be inclined to buy flushable wipes for one of my kidlets - again, name withheld for his privacy).

8. After my first two took so long to toilet learn, I decided I'd put my third in cloth nappies because I'd heard that makes a huge difference - you know cause cloth isn't as absorbent so the child can really feel when they're wet... Yeah, not for my child, it didn't.

9. I tried elimination communication for a while with my fourth and I wish there had been flushable wipes then - maybe I would have stuck with it!

10. If my fourth child learns to use the toilet at the same age my third did - he was the youngest to leave nappies behind - then I'll have concluded a 13 year, 3 month continuous stint of nappy changing. I will have changed about 25 000 nappies, give or take (let's say each change takes three minutes on averages, that's 1250 hours spent changing nappies!)... I am so very ready for this last little boy to master the art of using a toilet!

So, we did eventually use the Kleenex Flushable Kids Wipes and here's what I found out about them...

Kleenex have made it possible for me to offer my readers a giveaway - yay, free stuff, who doesn't love free stuff? If you would like a chance to win the following;
Prize
TWO dispenser tubs
FOUR refill packs
A very cute plush puppy 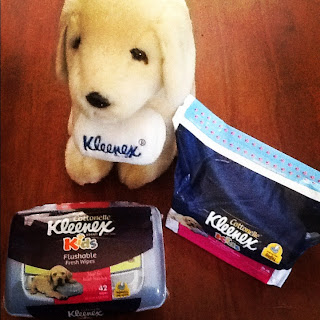 Then leave a comment below telling me what you will do with all the extra time you'll have once your child no longer requires nappy changes!
Don't forget to check out the other ways you can get extra entries!
Entries close 7th of February (because I like short sharp giveaways - I'm kind of impatient like that) and the winner will be announced on Wednesday the 8th of February. Australian entries only. Kleenex will be mailing the package to the winner.

Disclosure: I received Kleenex Flushable Wipes products for the purpose of reviewing. No financial compensation was offered or accepted and the findings of my review reflect my honest opinion only.


And for those of you who participate in my regular 10 Things Tuesday link up...

Somehow the wonderful word of Google brought me here and I am so glad it did. I loved your list and could not help but smile, maybe I was destined to stop by here as I am in the process of training my nearly Miss 2! lol what would I do with my extra time not spent changing nappies??? We are both parents, we both know there is no such thing as spare time! Kids just miraculous seem to devour it! lol

We have recently finished our nappy journey, but I would still love some flushable wipes...those skid marks you speak of...not to mention that most public toilets have paper that leaves a lot to be desired. I too an wondering this spare time you speak of...where is it?

The Navy Wife - Yay for Google! Of course, you're right! I guess it's more of a wistful, 'What would I do with that time if it wasn't sucked in to the parenting vortex...' LOL!

Rhianna - I'm a little concerned about how dependant I am on these wipe thingies already, even though Ari is still in nappies! They're a little bit addictive, haha!

Love your post Sif!! Had a lovely time with you today and the kids.
Guess what? Nicholas took himself while I was resting and did a poop on the toilet all by himself!! He did it again after dinner...no bribery or rewards on offer this time just lots of praise..it was wonderful. No mucky jocks to clean or dirty bottoms to have to bend over and clean up - which in itself is quite challenging at the moment with the reflux settling in. If it frees up my time a bit suppose I will be putting it to use to get things order for the baby...maybe or maybe just put my feet up....lol

I didn't mean to post as anonymous. clicked wrong box, but I guess you know who I am lol....and looks like I got my Dr. Who episode recorded tonight, but will have to check there are no drop outs....

Im counting down the days until jellyman is no longer in nappies! He has now discovered he can take his nappy off (doesnt matter if he is wearing clothes he still gets it off) so im ALWAYS finding a nice surprise somewhere. And i dont think by him being out of nappies is going to give me time, hes walking and always on the go. Mummy is always on the go too, chasing after him! The only time i get is when i go to bed!

Thanks for the follow and I'm doing the same, especially as I was like going uhuh, uhuh, you tell 'em, girlfriend!

We have three boys under five, and I already know I'll be changing diapers for eight plus years... sigh :)

Sue, wow! I'm not even going to pretend that I'm not completely jealous of your boy mastering the potty! Ari will get there, one day, I know he will. I just have to hang in there until it happens, hahaha!

Erynne (what a lovely name!). Sounds like Jellyman is quite the Houdini! How frustrating! You're probably right about not having more time, per se, at least your time is likely to be somewhat less smelly, LOL!

Hi there Mark! There boys, what a blessing! At least it seems like you're over half way through the diaper changing stage (unless you meant eight MORE years, LOL). There really should be some sort of medal for those of us who serve long duty changing diapers!

Spare time? Ha! What's that! I also won't have to WASH nappies, not that I do much more than throw them into the machine and then take <5mins to hang them out LOL. And yeah, cloth nappies and STILL they don't want to use the toilet! HAHA!

Miss 3 will be using the toilet soon. We bought Tinkerbell undies this week which I (and her OT) hope will help her. I think I'm just gonna have to set a timer and get her to sit every time it goes off. Even if it KILLS MY "ME" TIME!

So what'll I do when I'm no longer changing or washing nappies? Probably dishes. Or vacuuming. Or maybe I'll sit with my little girl and read her some stories.

Sitting and reading stories sounds like the best option, there, Silne! Thanks for joining in!

Extra time- I don't think I'll have any more excuses not to clean out the cupboards etc. russellcathryn at yahoo.com.au

A little me time, instead of wee time sounds good to me.

if I have more time I will probably spend it on house work, I think having the extra money will make the most differnce.
tjranch at ymail dot com

More spare time - sounds great - but does it ever really happen! Maybe we could go to the park a bit more often - that would be good!
Tony - Email: birdcaget@hotmail.com

Oh my, extra time due to no nappy changes - I cannot wait. My Mr-just-3 is not going so well with the toileting and some days I loathe changing his nappies.

If I had more time I'd... sit with my feet up, a book and a cup of tea! Really, probably just surf the net more while trying to keep an eye on the kids!