Getting back on the writing pony...

Day two of this year and I've added the next photo for the January Photo Challenge (check out the pages under my header up there)... So, that's still going (oh, yes, I am totally surprised as well!).

Considering that minor success, I'm feeling a bit brave. I may be confusing bravery with stupidity - I often get those two mixed up - time will tell.  I've seen a few of my writerly friends talking about joining up with a 2012 writing challenge to write 500 words a day for this entire year. Okay, so considering doing anything for more than a couple of days in a row is a major challenge in itself for me, I'm probably biting off more than I can chew, but hey, this year is about taking every day as it comes and not having any expectations - and that would also include not expecting to fail, right?

So, I followed a link over to Cara Michaels' blog Defiantly Literate and read about her challenge to 'carpe verba' (seize the word for those playing along at home) and commit to writing 500 words a day. Not just any 500 words - I don't think tweets count (one could argue tweets never count anywhere for anything...) - but 500 words of writing which goes toward a writing goal. Blog posts are line balls in as much as if your goal is to blog prolifically then you might get away with counting those posts, but really it should be something other than blog posts. I won't be counting blog posts. 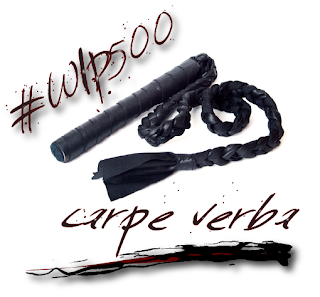 I've decided to start afresh on the novel I tried to write for NaNoWriMo. I only got to about 5000 words on that project, but even in the few weeks since putting it away, I've had new thoughts on how I'd like it to feel and a fresh start is the best way to achieve my new goals for that project.

If I do manage to write 500 words a day, that final word count for the year would 183 000 words which far exceeds the word count I need for Shifter, so obviously I'll be working on other stuff as well. I'm hoping to form a habit of writing (other than blogging) every day. If I can form that single habit, then 2012 will have been a roaring success for me!

I've discovered a great little gadget called a word meter here and plan to use it a lot this year to track various projects (as you can already see in the right hand column).

So, now I have photography, crochet and writing projects going and 2012 is looking to be a very creative year!
at January 02, 2012
Email ThisBlogThis!Share to TwitterShare to FacebookShare to Pinterest
Labels: Thinking, writing

500 words is a lot every day, I did the 30 days of creativity and found it really hard but got through it. What i did find about it though that by the end i was a lot more creative and began looking for things to fill in the time i had allotted to that project every day. Ended up going back to school and havent looked back. Good luck and looking forward to your daily offerings this year. xx

This blog post was roughly 450 words, LOL, and the 1100 word on my word meter were from about 45 minutes this afternoon. As long as I can get myself to the right screen (Word - for writing purposes until I come into money and can afford Scrivener), getting 500 words out isn't particularly taxing. The challenge is getting to the right screen - not facebook or twitter, lol!

Good luck with it all! My challenge this year is to write a picture book a month through Julie Hedlund's 12 x 12 in 2012 challenge.

That's a great challenge! One day I'll try my hand at another picture book!

Joining a challenge and keeping yourself accountable is a good place to start.