8.02pm on Saturday night, the second eldest is just going to bed (yet another new night time routine has emerged in response to some difficulties getting four to go to sleep somewhat peacefully in one room. This will not comfort those struggling to get babies and toddler to bed, 12.5 years into this parenting caper, we're constantly tinkering at the edges of settling kids for the night. The current incarnation is that Ari and Bryn go to bed at 7pm; Ari in our room with the Grumpy Old Man laying with him and Bryn on his own in the boys' room. Then Luey goes to bed at 8pm, and Erik at 9pm. I wasn't going to let the older two have those later time slots until they turned 11 and 13 but 30 minutes between Bryn and Luey meant that Bryn would hold out until Luey got into the room and then they'd play funnybuggers until Erik came in a 8.30pm and we'd be lucky if we weren't still telling them to 'settle down and go. to. sleep!' at 9-9.30pm. With a staggering of an hour between each child, they seem to all drop off by the time the next one is in the room - and we transfer Ari once Erik is asleep.

But that's not what I was going to write about, actually - got a bit sidetracked there, didn't I?

I've been struggling with the knowledge that I have to get myself to a doctor and onto anti-depressants again. It's been at least 7 years since I was on them last, and I'm really, really pleased with that run. Lately though, I've known this bout of depression isn't just going to blow over. I've been waiting for things to 'get better', for things to 'go our way' again, for the 'run of back luck' to stop and I've held fast to the idea that then I'd feel a lot better.

I'm on the verge of tears constantly, which is rather ridiculous, and now I've slipped into that state of hopelessness where I'm just convinced nothing will ever get any better and there is no use trying to make any effort to do anything because it'll all come to nought in the end.

Congnitively, I can rationalise that that is a load of horse nuggets but emotionally I can't budge the great big lump of blah in front of me that keeps telling me it would be best to go to bed for a while and check back in a few months to see if anything has changed without me.

I've come to the realisation that on Monday I have to call Centerlink and ask them what they can do to help this disabled person to get a job. I know some of you might be thinking, 'Eureka! Finally, she has woken up to herself and is ready to get of her fat, lazy arse and do something productive.'

To those of you thinking that - here's a big, fat, lazy birdie for you... 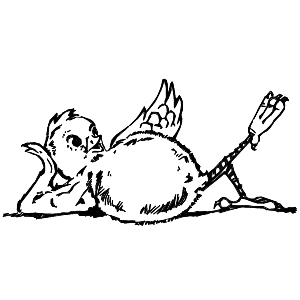 You see, I'm not as stupid or lazy as some of you might think (oh, I'm not talking about my friends who read this blog, I'm talking about the people who like to cast stones from the comfort of their glass houses - oh, yeah, that's right, I haven't forgotten all your lovely words of encouragement, don't you feel honoured?).

The prospect of seeking work scares me numb, it really does. I'm not afraid of hard work - I welcome it. If someone offered me a real job cleaning public toilets right now, I'd take it.

What has me feeling sick about getting back out there into the job hunting game is my past experiences. You see, on several occasions in the past I've been unfairly dismissed because the employer was concerned my low vision might lead to me 'making mistakes' - the fact that I hadn't, to that point, actually made any mistakes, seemed completely irrelevant.

On a couple of those occasions, the employer conveniently realised I might 'make mistakes' just around about the same time the government subsidy for my position was about to run out. On one occasion the employer happily took the government's money, but didn't actually pay me any wage at all (Oh, didn't you realise tax payers can budge of the government as well? Now you do). He kept saying there was a hold up with some papers and he'd pay me 'by the end of the week' until six weeks later (because I'd really wanted to believe he was telling the truth), I finally walked out and called the taxation office myself.

However, with no other prospects on the horizon and facing the beginning of the school year unable to pay for the book packs, let alone any excursions or incursion (of which our school seems to have far too many), I'm going to have to suck up all my depressive and anxious thoughts and just get out there and do what needs to be done.

I have to believe that even though only 15% of employment seekers with my disability actually find job, I'm going to be part of that 15% (despite the fact that everything we've done to date to get my fully able bodied husband any work has failed).

Maybe this is what the universe has been trying to get me to do all along and as soon as I act, everything will fall into place and be wonderful again?

Oops, better go, my optimism is showing...
at January 14, 2012
Email ThisBlogThis!Share to TwitterShare to FacebookShare to Pinterest
Labels: Thinking

That feeling of hopelessness ... it's just a killer :(

BUT ... I will cross everything I have for you that you fall within that 15% AND find an employer who can look right past your disability and enjoy having a hard worker around :)

Thanks Kelly, that would be awesome! I barely dare to hope to actually get work doing something I'm passionate about (writing and children), but who knows what might happen, right! At this point, I'd settle for anything just to know we can afford things other people don't consider luxuries.

Oh. I'm so sorry that you've had such a terrible run with employers. Is it worth looking into copy work that you can do from home on your computer (am assuming that it's a large screen like mine).

I hope you both find something soon. And do see the Doctor. 7 years is a wonderful stretch to be off the meds, but it's honestly such a good thing when you recognise that you might need some extra help atm.

We're having hell with the book packs too. We've just moved house, J's boss owes him a fortune and if school started just ONE week later, we'd be ok. This is a BAD week to be paying for school.

Sorry. Just dumped that on you. I do hope that things settle down and you can find some kind of work. Preferably work you enjoy.

Some people don't, cant' and should thank god that they cant appreciate the way depression can suck all the self belief and confidence out of you.

They should also appreciate that given that, they really have no platform to stand in judgement from.

Going back on the meds can be a positive thing, a tool to help you cope in a situation that is no wonder pulling you down. It's not a failure in any way.

There are plenty of people out here who have belief in you and are wishing you well.

Hey, no worries, Melissa, it's actually really good (those aren't really the words I'm looking for here) to know we're not alone. Spoke with another friend earlier in the week who is also going through the same sort of stuff and it made me feel better just knowing it's not just us - even though I wish no one had to have these kinds of stressors. I have a great iMac 22 inch screen which I have set to large print etc. It's fantastic (Mac's can also read screen content if you need them too - voice over style). What do you mean by copy work? Sorry for my cluelessness here.

Sarah, too right! I've been putting this doctor's visit off for a few weeks now - I know better, I really do, I'm juar struggling - my agoraphobia is well out of control at the moment and just the thought of entering a doctor's waiting room makes me all teary... Oh dear. It's going on my to-do list for Monday as well, though.

I'm sorry it seems to be rougher patch after rough. I really wish you some great news that lingers and snowballs into greater news. Your underlying optimism is rearing it's bright head and I hope it helps you face the doctor and prospective employers and brings you some good things. Hang in there.

I hate that feeling of hopelessness, but it's good that you are actually vocalizing, so maybe you're quite as far down that road, it's great you are able to realise you need to seek help. Sorry not trying to sound patronising. Looking for work is terrifying!! I hate interviews and I'm always worried about losing the job. You are not alone, I will be crossing all my fingers and toes hoping things start to turn around for you guys, you certainly deserve it. If there's anything I can do to help lift you up....maybe coffee and cake..(always looking for someone to bake for), let me know!!

Ah, Sue, if only I could get your cakes on prescription! We should catch up soon, let me know when suits you!

Veronica, thanks :). Some lingering good news would be very welcome around here! I want to put something happy and inspiring on this blog - not the same old, same old 'This fell through, that didn't eventuate...' crap I feel like I've been writing for far too long!

Sorry to hear that you've had bad luck in the past with employers but you have too many skills and talents to be passed over in the employment market for long. You just have to find your niche - you have a lot to offer so think about the interviews as you checking the employer out as much as them checking you out. I know there will be an employer out there who values and respects your contribution and couldn't care less about your disability. Hope it doesn't take long and you get your confidence back really soon. jen

Thanks Jen :). I do have a lot of talents and skills, what I lack is work experience. I haven't had a lot of luck finding any employers who are happy to overlook my disability, not yet anyway. My main issue being that I can do whatever another employer can do, but because of low vision I'm not as efficient as other employees might be, I have to do things more slowly and methodically - at least until I build up experience and I don't have much in the way of real life experience in a work place - all my knowledge is academic and theoretical.

My resume is not at all impressive.