Wanted: A truckload of writing mojo...

They say happy people don't make great artists. Some of the greatest painters, writers and actors of all time suffered from great anxiety and depression and this underpinned their best creative efforts...

I should be writing something spectacular right about now if this was true for me.

Instead I seem to have drawn a blank.

I received a tweet the other day asking if I was still participating in 'Carpe Verba'. I said I was, I'm just have some difficulties at the moment. This is true. My mind is a wasteland for creativity.

I was thinking I might pick up one of my notebooks and have a go at handwriting again. Maybe a bit of actual hand writing might stimulate those parts of the brain that seemed to going something like this...

Okay, let's get an idea moving. Just something little - a flash fiction... About something I know, maybe... A woman blogging, a curious comment, a follow-up by email, a mystery, investigation, a hostage situation...


I have this idea in my head for a story. It's not actually a flash fiction, or even a short story. It is something longer. But I can't grasp it. I reach out and the threads break when my fingertips brush them.

My characters can't talk, their throats are dry and they choke on their words. They're unsure of their footing when they walk and they hesitate and stumble if I try to push them along.

They look pale and thin, too, like they need a good feed. They're not supposed to be pale and thin - I can't jot those characteristics down as part of their description - it's more that my mind isn't feeding them enough to round them out.

So I abandon that story line and try for something else, but everything else is just grasping at straws.

There is always Svava's story. It's all wrong now though. It doesn't match up with Lily's story at all - which is a problem because the characters are very much connected and very entrenched. I have considered relocating the story to separate it from Lily's story altogether, but the characters like where they are right now and are fighting me on this. I don't have the strength or will to go into battle with them. It's their story, what right do I have to change it on them?

Lily is pestering me too, 'You promised you'd get my story professionally edit - a year ago.' She's kind of pissed, poor sweet girl. She's been through enough. She's been trying to be heard for 16 years now. I don't have the heart to tell her that I think, maybe, I've failed her and that no amount of editing is going to impress an agent enough, let alone a publisher.

Meanwhile, my Minecraft queendom is looking kind of fabulous, if I say so myself. Erik and I have been working on it together a lot lately. He's had quite a few late nights fighting zombies and skeletons for me so I can get their mob drops (I like to play on peaceful, I'm not fan of the adrenalin rush that happens when some creature tries to kill my character - who happens to be the 11th Doctor at the moment). 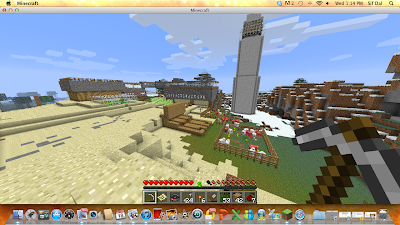 My blanket is really coming along, as well... 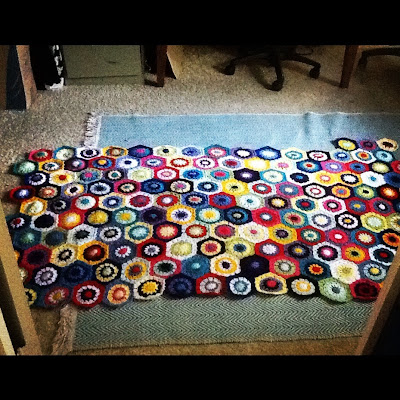 Just got to finish that last row and do the edging.

Maybe my writing mojo will resurface when the kids go to school... If you see it though, tell it to get its butt home to me - I miss it. I'd offer a reward if I had anything of value to offer.
at January 18, 2012
Email ThisBlogThis!Share to TwitterShare to FacebookShare to Pinterest
Labels: Family life, Thinking, writing

I love the way your blanket is coming together? Hope the writing mojo returns sooner rather than later

I think you outlined a pretty good story of a struggling writer having issues with working with their characters ;)