All the great scary stories about parenting come from the premise that what you do in front of, or to your child, they will take on board and replicate.

Don't smack your child because then they will grow to believe physical violence is the answer to all their problems.

Don't swear in front of your child or they will swear at nanna and all hell will break loose.

Don't let your child see you iron for your partner or they will become indentured houses slaves for their own partners...

Never drink in front of your child or they will become an alcoholic.

Like every scary story, these all begin with a grain of truth. Children do look to adults to learn how to become members of society. Human children are most definitely social creatures.

However, living in fear of being the wrong kind of role model is also based in the belief that children come into this world as empty vessels with no personality or thought processes of their own, and that the people around them create their every view of the world.

This same belief underpins a lot of 'perfect parenting' practices. If you keep your children away from certain mindsets or live choices then the child will never come up with those thoughts or life choices off their own bat.

This is probably why I came around the corner into my study just a few moments ago to find this scene... 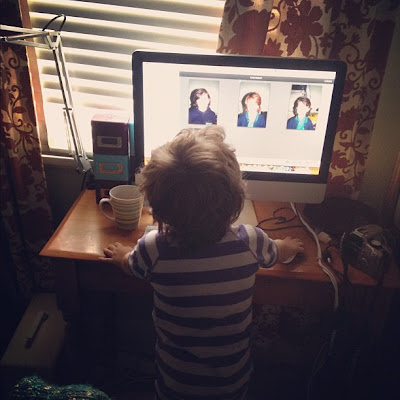 Ari mucking around on my computer and also (though this photo doesn't show it) swilling my cold coffee...

Undoubtedly, he believes this is what adults do. I do it a lot!

Other bad things my children do that they've probably picked up from the Grumpy Old Man and I include:

* Whining 'Whaaaaat?' in response to their name being called. I'll argue they mostly got this from their dad, he's a champion at whining 'whaaaaat?'

* Putting their feet up on the coffee table.

* Demanding a hug while simultaneously lashing out and being generally completely unhuggable (oops, Ari gets that one from me).

Oh, I can't think of anything else, because, you know the GOM and I are actually pretty perfect parents (yeah right)...

But you see, therein lies the rub that disproves this myth...

Despite us simply never modelling the following, the kids also...

* Pick their nose and wipe it on the wall! (all of them, grrr)

* Sleep with their socks on (all of them)

* Vote Liberal (no, no, they don't do that, I thought I'd just throw that one in to see if you were paying attention)...

You see, sometimes kids just do stuff they've never seen modelled. They come up with stuff on their own because of their own personalities. You can model until you're blue in the face and your child might still chose a completely different life to the one you hoped for them!

I'm not a Christian despite decades of modelling from my mum (who raised me as a single parent from when I was 13).

I have no wanderlust like both of my mum and dad had all my life.

The GOM on the other hand never wanted to work 9-5, five days a week in the same job for 40 years like his dad. He's not a big tea drinker. He hates gardening (they both loved gardening).

You cannot make your children into the people you want them to be, and quite frankly, your influence over their lifestyle choices is quite limited. Many children actively rebel against their parents chosen lifestyle!

My friend Jayne recently moved back into her childhood home, and the first thing she did was paint two walls in the house bright purple. Her poor mother's face was almost bright purple from watching us paint over her favoured beige colour scheme. Jayne is not a beige décor kind of woman despite decades of having beige house furnishings modelled for her.

Just because I breastfed each of my children for several years, and co-slept with them, and wore them in slings, and had the attitude that they should choose their own educational paths does not guarantee they will make the same parenting choices. Yes, my children might even vaccinate their own children, ye gads!

Just because I smacked my children does not guarantee they will smack their children. Many of my friends who were smacked as children have never smacked their children. I've also noticed that of my four, two were smacked a lot, two weren't. Two will lash out physically in frustration, two won't. Of the two who do, one was smacked a lot, one has almost never been smacked. The same goes for the two who don't lash out when frustrated.

So, if you feel that being a parent, and modelling correctly for your children to create the kind of adults you want them to become is something like living in a straight jacket, then loosen the straps a little. Allow yourself to breathe a little because chances are some of what you've modelled so well will stick and some of it won't, and in some ways your adult children will disappoint you with their choices and in other ways they'll be so much better than you ever were able to model anyway!