Today Ari is three and a half. 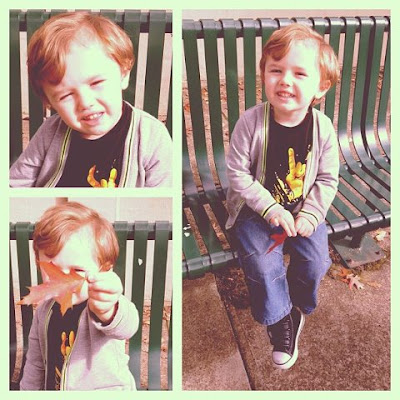 It's funny, I was so excited about him turning three but cannot get my head around him turning four, but now that he's three and a half, I can't deny that four is coming!

He is currently 95cm tall and 14 kilos, which puts him on the 10th percentile for height and the 25th for weight. He's still a little tacker, but he seems to be growing like a weed on his own curve.

In the past six months his hair has become more and more curly (the curls are not evident in the photo above, I know, so you'll have to take my word for it). It's still a nondescript light browny, blonde highlighted colour with tints of strawberry.

He talks fluently now and nearly all his baby talk is gone. He has a peculiar old-fashioned was of talking, 'You look very lovely today, mummy.' and 'How are you feeling today, mummy?' - I'm not sure where he picks these turns of phrase, we generally don't speak like that around here, we're more, 'You look spiffo!' and 'How you doin'?', ha!

He's been out of the pram since March and just today we had a special lunch date with him at the shopping centre and at the table next to us a boy who was a fair bit taller than Ari was being hoisted into a stroller. Ari looked on with a look of utter confusion! 'Why isn't he walking, mummy?' and 'Does he like the pram?' Ari was very happy to see the back of his pram and is all for holding hands and walking these days...

His eating habits are pretty much the same as before. He loves meat and hates vegetables. We can occasionally get him to have a tiny taste of carrot or baby spinach leaf and the other day he used broccoli to sop up gravy - and then sucked the gravy off the 'little trees', ergh!

He does love fruit now - even bananas! So, that's something at least.

He puts himself to sleep at night now. So, okay, lots of 3.5 year olds do that, but see he was a co-sleeper until he was just under 3. From  then he would be parented to sleep and transferred to his own bed. About a month ago he asked to go to sleep in his bed and he asked the Grumpy Old Man to leave him and then he just went to sleep. He'd been doing that consistently for two weeks before we actually believed it!

He's a very visual child. The other week I wrote a blog post about Doctor Who. I hadn't put any photos in the draft yet, and then he reached past me at the computer and put his finger on the word 'Doctor' and said, 'It's Doctor Who!' He recognises the word from our TiVo recordings menu.

In six month's time, he'll be four. I just can't imagine it.

Anna said...
This comment has been removed by the author.
9:00 pm

I just love watching my children grow and taking in their personalities and traits. He is just adorable, as I'm sure you already know. Four is not so different, just a day older that 3 and 364 days.

Thanks guys. I'll get used to the idea of four buy the end of the October I'm sure! Being the baby of the family probably also explains why I'm clinging to the idea of him being our little man. Eventually though, he has to grown up!