Today I thought I'd update everyone on how Erik went with the new art course on Thursday. I found the whole experience to be very thought provoking, let me tell you why...

I'll start by explaining the suburb we live in is highly populated by immigrants from Asia, most especially from China. At our local shopping centre almost all the businesses barring the majors like Woolies and Big W are owned and serviced by Chinese. Most of the signage is in Mandarin and up until very recently there were quite a few businesses (particularly restaurants) where you couldn't get service unless you spoke and read Mandarin. There was an issue in our suburb last year of housing auctions being conduction in Mandarin sometimes without an English interpreter. Our suburb is somewhat of an Asian enclave.

I have found this alienating at times and have discussed my feelings of alienation with friends, but if you don't live in our suburb, it can be hard to understand the cultural divide that can often be felt. A lot of people have said things like, 'I'd love to live in a suburb which is so culturally diverse' or 'You suburb has the best market and supplies, you're so lucky!' They haven't gotten what it is like not to be able to get service because you don't speak the language and don't look the same - and yes, that really happens.

But before you label me racist, let me tell you about something I've realised recently...

First, I had the attitude that at the local shopping centre the customers where 90-95% Asian and I felt awkward and alienated. I rarely saw parents from school that I recognised (until this year our school, in this suburb, was 95% non-Asian, believe it or not).

Then a few weeks ago I went to a shopping centre down the road (which takes three times longer to get to by public transport, so we never went there before) and in the span of two hours I ran into six school families I knew. It dawned on me that people who live in my suburb and go to our school actively avoid our local shopping centre. I'm sure they'll say it's because it's crowded or not as well appointed or the parking is horrendous, but I have to wonder if it isn't because they also feel uncomfortable attempting to build a bridge between two distinct cultures?

So, now you're probably wondering what this has to do with Erik's art class? Don't worry, I'm getting there.

When considering sending Erik to an art class, I checked out our local community art centre. We've been there before for Erik and Luey to do pottery and drama, or art (years ago when we had more disposable income). I found they had outsourced their art classes to a business in a neighbouring suburb, so I went to the site of that business. The courses they offered looked perfect for Erik, so I rang the teacher of the course to find out if there were any places available.

The first question she asked me was if I spoke Mandarin. I said I didn't at all. That wasn't a problem, she told me about the course, said there was a place available for Erik and encouraged me to bring him along.

On Thursday, I took him to the art centre. We got there a little early (as I always tend to do, it's annoying, but I fear being late for things). Another couple was already there with their little boy, aged 6 or 7. The teacher was busy talking to the other couple so I waited. They were talking Mandarin so I didn't understand any of the words, but it is was obvious the parents were concerned about their child enjoying himself and being comfortable in a new environment.

When a small group had gathered the teacher addressed them in English and asked them to help her set up tables. At this point I was cued that the class was starting and said goodbye to Erik and headed off to the local shopping centre to buy dinner.

About 40 minutes later I returned to wait outside the class. I had an hour's wait ahead of me, so I checked twitter and Facebook and listened to the class in the background.

I heard a lot of children's voices, all speaking Mandarin, and I heard the teacher speaking Mandarin with them. Occasionally, she would say a sentence or two in English. I couldn't see Erik and couldn't hear him so I started to feel concern for how he was enjoying the class.

Could he understand what was going on?

Towards the end of the class, I heard the teacher round the children up and, in English, begin a review activity where the children looked at each other's work and discussed it. I heard her says, 'So, today we drew Easter bunnies! Look at everyone's wonderful Easter bunnies...'

My stomach sank. I envisioned Erik in a classroom where everyone was speaking a language he didn't speak, and were years younger than him and where the activity was to draw Easter bunnies. I imagined him hating me for bringing him to this terrible course. I tried to imagine how I would explain to the teacher that I didn't think this course was right for him after all and how I would like a refund. I felt a bit resentful that the course was being run almost entirely in Mandarin; that nothing on the website or in conversation with the teacher had indicated that this was an art class for Chinese students...

The door to the room opened and I and the other parents filed in to collect our children. I noticed a couple of other students about Erik's age; the girl I'd seen before and a boy who looked about 16 with a large folio in hand. Every student in the class besides Erik was Chinese. I spotted Erik across the room standing with his drawing pad in hand, looking unsure. I caught his eye and he came over.

I asked him, 'So, how did it go?'
He replied, 'Great!' with a huge grin and sparkly eyes.
I said, 'So, you want to come back then?'
He said, 'Yeah!' nodding his head enthusiastically and then looking at me askance because he thought I might withdraw him for some reason he obviously could not comprehend.

The teacher joined us and I asked her how he went. 'Have you seen his drawing? It's very good!' she said. I said I hadn't yet. I asked her if he was too old for the class, and she said there were students of all ages and that they were divided into groups depending on ability, and he fit in well with the older children who had been given a still life to do.

So, I left feeling much calmer, not least of all because of how Erik enthused about the class.

He said he'd felt intimidated at first because he didn't understand most of what was being said, but then he was given a task along with the older students. He said the older students didn't talk to each other, they just got on with what they were doing and he really liked that because in his last class one of the children would bug him the entire class because they knew each other from school.

He said there was a boy there who looked Chinese but who didn't speak a word of Chinese and so one of the other kids would translate for him and Erik listened in on that.

He said there were a bunch of younger girls from the beginner group who were 'Sooo annoying' because they kept looking at him and giggling and whispering to each other (and then he smiled in that way that told me he wasn't really annoyed at all)...

He said the older boy was really good at drawing and how he did shading in a way Erik had never tried before.

Suddenly, I found myself wondering why other non-Chinese parents didn't enrol their children in this art class? Were they, like me, intimidated by the language barrier? The teacher seemed extremely happy to have Erik in her class, so she wasn't opposed to non-Chinese students.

More and more I find myself wondering why it is that cultural enclaves occur in cities. It is because new and foreign cultures 'take over the suburb' or is it because there is a tipping point at which a majority culture will 'evacuate' a suburb because the numbers from an incoming, distinctly different, culture reaches a point where the older culture in the suburb feels displaced and actively disengages?

Whatever the case, despite being the only participant in the course who doesn't look Asian, and only one of two who doesn't speak Mandarin - in which about 80% of the class is conducted - he had a ball and feels inspired and wants to keep going! That was the goal of  enrolling him, so I'm happy!

He is what he drew in class: 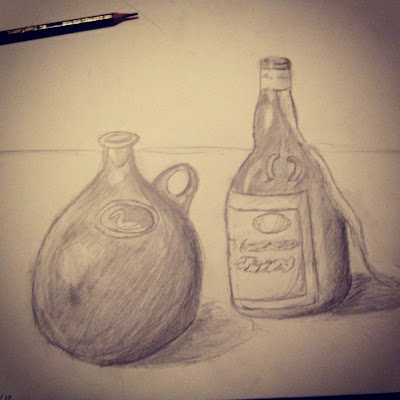 at April 23, 2012
Email ThisBlogThis!Share to TwitterShare to FacebookShare to Pinterest
Labels: Family life

How wonderful that he felt comfortable and wanted to go back. Sounds like a wonderful opportunity for him.

Not sure about the cultural and area dynamics-I wonder if perhaps the Chinese community, being very collective and community minded are linked into these things more, whereas other cultures who are more individualistic, might be unaware of this class's existence?

In any case, so ace for Erik-and he is very talented, that's a fab drawing :)

I reckon it's definitely the agony of parking, including entering and leaving the carparks, and the busy checkouts that turn people off shopping there, nothing to do with the Asian percentage. I'd much rather shop there due to the range of shops, produce, proximity etc., and couldn't care less about there being many Asians (have also never had a problem communicating with shop owners or getting served, but I've only been in the area for 5 years so maybe that's an older problem) but it's just too difficult logistically. Blackburn North is where we usually go, even though I find it an uninspiring place to be with it strange population of middle aged bogans and grumpy parents. I go out of my way to never shop on the south side of W'horse Road in Box Hill - I'll drive as far as Balwyn or Forest Hill to avoid the congested traffic and dreadful parking around there. I have to avoid Doncaster because there's too much temptation there besides the supermarkets, also too long a walking distance to and from the car for me, but that's where quite a few friends do their shopping - mostly due to the easier access although the supermarkets there do have a larger range.