Tantrums never really end, do they? 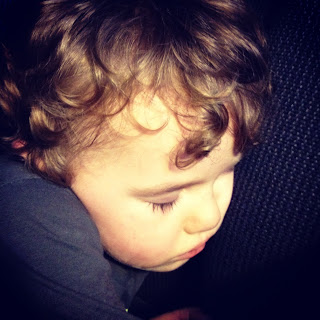 This is a post-production tantrum face...

Can't help but love the sight of a sleeping child, right? I reckon sleeping in the wake of a massive meltdown is what small folk do so their parents don't drown in them in the toilet...

As this little one's tantrum was in full swing a while ago I found myself comparing it to that of his eldest brother (who is going on thirteen in July).

This tantrum found it's root in the overstimulated nervous system of an overtired little person who had been up and on the go for the past 11 hours.

He loves to get up early and he loves to be on the go and most days he can get through to his 7pm bedtime all right, but about once a week, now, he'll lose his little mind at about 4pm.

It starts with giggling and running around and flapping arms. It may then progress to hitting his brothers and - since his recent arrival - attempting to hit the dog (the dog is thankfully a bit more canny than the brothers and can avoid most physical contact). Alternatively, he'll jump on the couch or the bed, or just on the floor throughout the length of the house.

We try to redirect him and we try to put a lid on his behaviour, sometimes this works, mostly it doesn't.

Eventually, the Energiser Bunny behaviour will lead to a reprimand, if not from the Grumpy Old Man or myself, then most definitely from the brothers. Then the crying begins.

Most people see the crying as the beginning, but I see it as the culmination of the tantrum. When the crying starts, I know the end is nigh. Once the crying commences, containment becomes key because nothing else works at this point anyway - just like with his biggest brother.

For Ari the crying doesn't last very long (thank goodness, Erik could cry for up to two hours!) before the eyes droop and slumber is upon him.

He's in bed now and may or may not stay there for the night. He hasn't had dinner, but I won't wake him for dinner (because he wouldn't eat, and would cry a lot more). If he wakes, he'll be offered food then.

Funny thing occurred to me. Tantrums are most often associated with toddlers and preschoolers, but from my experience, they never actually end.

Earlier this afternoon my six year old had a tantrum because he thought he was going to the shops with the Grumpy Old Man. He thought if he went to the shops with his dad, he'd get some lollies. He was absolutely convinced he never gets as many lollies as the other boys (last weekend he went to two birthday parties and came home with three lolly bags - yes, one of the parties had two lolly bags for some reason I simply cannot fathom!)... There was sobbing and yowling and foot stomping, but this time we were saved the dramatic door slamming...

Last night the 12 year old threw a tantrum when he was sent to bed at the same time as the 6 year old because he just wouldn't give up his attempts to bully parent his brothers with aggressively toned calls of 'Go to bed!' He thought it was extremely unfair that he should have to 'Go to bed!' just because he was trying to ensure they followed the rules (not standing over your brother yelling at him is also one of our rules)...

And yep, you guessed it, the 10 year old throws tantrums, too. Of course he does, he's a redhead! Okay, that's probably not fair, but the 10 year old is quite the tantrum meister - though this week hasn't been too bad, on the whole.

So, really, I don't think the tantrums ever end. We seem to deal with at least one or two every day around here - sheer numbers increases the frequency. A big part of managing a large family turns out to be managing all the wild emotions...

Or maybe that's just us!

PS - I'm adding this one in for Peta's sake (ha! see what I did there?)... If you had hopes that tantrums end in adulthood (because we all know teenagers can throw spectacular door slamming, 'You are the lamest person on the planet, Mum/Dad' tantrums), let me put you straight.

I used to have a favourite cup, it was stripy and I liked the maroon stripes on it, anyway, it's in 20 pieces in the rubbish bin now because in mid-tantrum on Monday night, I threw it at a wall. What was so frustrating I had to break my favourite cup? Well, basically, the Grumpy Old Man went to Supa Nova and then came home and told us all about the fab Doctor Who costumes he saw there. I was jealous, so I picked a fight, and then we let all our recent frustrations hang out, but he's better at stopping himself than I am, and when silence fell and I was still raging inside my head the cup hit the wall...

at April 20, 2012
Email ThisBlogThis!Share to TwitterShare to FacebookShare to Pinterest