I'm enjoying a quiet weekend this weekend, it feels like it's been a long time since the last one. There are always parties to take the kids to, or some event or other to go to, or even just grocery shopping, but this weekend is nice and quiet - thank goodness, we need it!

Life is set to get busy again over the next few weeks.

Next weekend I'll be attempting to overcome my agoraphobia and volunteering at the Emerging Writer's Festival on Friday night (for the launch of The Emerging Writer) and on Sunday for Page Parlour - which, ironically, is the one EWF event the Grumpy Old Man attends each years because he usually knows at least one person having a stall there - this year he knows two.

I've been meaning to get more involved with the local writer's scene for a while, but I have so much anxiety about meeting new people. The worst part is not being able to recognise faces or remember names and not feeling that I can make that clear to people in a way they understand. I have to just keep getting out there though because otherwise I'm going to dry up and blow away here on my own with my writing.

A friend's son also has a birthday party on the Saturday, so yep, next weekend is going to be full.

On the following Monday we have Erik's high school interview. He's been working hard on preparing a bit of a folio of his drawings to take with him. Last week we handed in the preferences form to the primary school for them to hand on to the department of education to then be forwarded to the high schools of our choice. We received a call from the teacher who was checking the forms before sending them to the department of education. She was curious as to why we'd chosen the high school we did, for Erik. She was curious because no one else from our school had ever gone to this high school - and apparently students from our school are going to seventeen different high schools but never this one.

I thought her question was a bit nosey, and in conjunction with the patronising I've personally encountered from this particular teacher previously, I have to admit I felt like she was asking us to justify our choice as if she thought we'd simply picked a name from a list because we thought it sounded good.

Luckily, I didn't take that call and the Grumpy Old Man politely told her all our reasons - he's good like that.

Erik is really enjoyed the art course he's been doing this term and has several pieces now that he can show the Principal at his high school interview. One piece will only be a photo of the drawing because the drawing itself has been framed and will be in this exhibition... 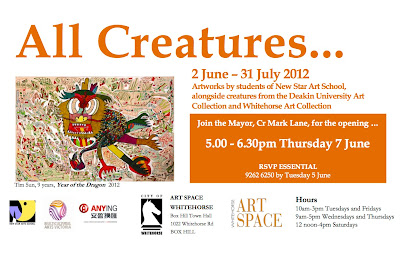 This is one of three places he will be exhibiting his art this year.

He is also working on a painting which will be exhibited at the Ian Potter Gallery at Federation Square in July... 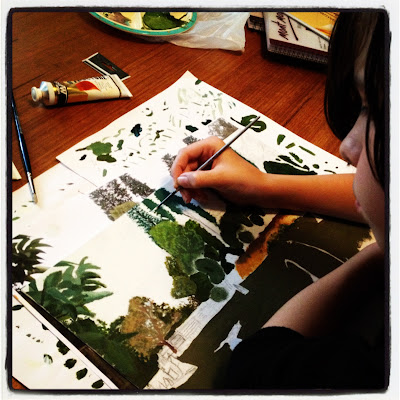 He hasn't decided what he'll submit for the Artist Camp Fair Art Show in November.

On the 16th of June we, as a family, will be attending an event at the Astor in Windsor to protest the possible closing of the iconic cinema to the public in the next couple of years. There will be a free screening of Labyrinth. If you're in Melbourne you might like to join us. More details here.

The Grumpy Old Man has put in an application for a job and has an interview next week. The original job description was pretty much exactly the job he was doing at Swinburne back in the early naughties. Due to State Government funding cut backs to TAFE in the budget that was recently release, after he put in the application, the job description changed. In fact, the position was initially scrubbed and applicants were notified, and then contacted again to say the position was back on, but had changed slightly, both in hours offered (reduced from full time over 18 months, to .6 over six months) and job description. We aren't sure if the Grumpy Old Man will be suitable now, but we live in eternal hope - even if it is only part time and until Christmas!

The Grumpy Old Man has another driving test coming up next month as well. Fingers crossed that this will be the time he gets it!

In other news - rather astounding news - I received a text from my dad the other day asking for my mum's mobile number. At first I thought it was someone who has texted to the wrong phone - someone else's dad asking for someone else's mum's number. You see, for the past twenty four years my dad has refused to talk to, or even talk about, my mum. When the Grumpy Old Man and I got married we eloped because I couldn't face the idea of dad not wanting to come to the wedding because he knew mum would be there.

Anyway, I checked the number the text had come from and it was my dad's number. I texted him to say that mum didn't have a mobile phone or a home phone and that I usually Skyped her or called her at work. Dad replied saying he didn't know what his options were, and I started to feel a bit anxious at that point.

In the end he suggested I give mum his number and ask her to call him, which I did, and she did, and it turns out they had a nice conversation and may catch up at my place one day...

To say I was shocked, still am shocked, would be something of an understatement. It actually makes me teary to just think about it.

A the child of a divorced couple, your reality - even if it wasn't a pleasant one - is broken apart and slowly, over time, you build a new reality. For some children that reality is shared custody and an amicable relationship between their parents, for most it is not. Children of divorced couples often get used to a reality where the other parent is a shadow who is only carefully referred to in ways that minimises the perceived pain of the present parent.

So, now my reality has changed again, and in one way it feels wonderful that my parents are actually talking to each other, to whatever degree that ends up being. On the other hand, this is unknown territory and completely unfamiliar and uncertain and I don't feel like a forty year old woman at all, but rather something like the sixteen year old I was the last time they talked. Weird.

It's been a big week.

So, how is your life going at the moment?

at May 26, 2012
Email ThisBlogThis!Share to TwitterShare to FacebookShare to Pinterest