Improve your chance of getting a job in Australia...

Last night I watched ABC's Q and A as I do most weeks. It was filmed in Dandenong in Melbourne's outer east. Dandenong's demographic is low-socio-economic with a high population of new immigrants. Unemployment in Dandenong is at 12% compared to a national average of 6%. 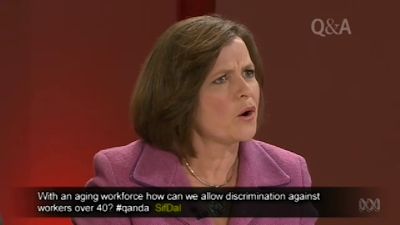 In case you can't read it properly, it says 'With an ageing workforce how can we allow discrimination against workers over 40? #qanda SifDal'

Don't get me wrong, I'm not in opposition to welcoming immigrants. I believe Australia has duty to offer asylum to refugees from war and devastation elsewhere in the world.

So, I thought I'd write a little list of 10 ways to improve your chances of gaining employment in Australia in the current employment culture and climate.

1. Don't be under 21 years of age: Employers believe you have a bad attitude and no real work ethic.

2. Don't be over 40 years of age: Employers believe you are too slow, too hard to teach new things to, too much of a work safety risk because you're going blind and deaf and have arthritis. Also, you may know too much and not be easily intimidated by your boss who is twenty years younger than you.

3. Don't be a new immigrant: Your accent is too thick to understand and employers get embarrassed when they can't understand you. Also, if you are from a war torn country, they believe you are traumatised and therefore unpredictable and unstable.

4. Don't have a difficult to pronounce name: Employers want to protect their egos and don't want to be embarrassed by stumbling over your name in an interview.

5. Don't have young children: Employers know young children get sick and then you'll ask for time off when it is inconvenient to them (which it always is). Also, if you're a woman, chances are you're still clucky and if you get pregnant they'll be forced to give you maternity leave, and Dear Lord, don't even mention giving you a private place at work to express!

6. Don't be a woman returning to work after years of staying home to care for your children: Employers know your mind has turned to mush from all the nappy changing and attending playgroups you had to do.

7. Don't be a person with a disability: Employers get embarrassed because they don't understand your needs. Also there is the cost of having to modify the workplace and what if there is a fire and you are slow to get out of the building because you have a disability or you accidentally hurt another employee, then they have to pay work cover?

8. Don't have an intellectual disability or any kind of disorder: Employers get embarrassed because they don't understands your needs and - yeah, pretty much the same as point 7...

9. Don't be overweight: Employers all know that overweight people are lazy and they smell, too.

10. Don't have too many degrees or skills: Employers all know that if you've skilled up too much, you'll probably know more than they do about their field and then you'll know when they're fudging their knowledge or getting something wrong. Worse, you will know when they're not keeping abreast of change!

If you can avoid all of these pitfalls, you'll probably get a job easily enough.

If however, you fit into one or more of these categories, then perhaps you can take advantage of flawed Government schemes to pay potential employers to employ you for a minimum of three months - after which they'll find a reason to let you go (sounds like they're doing you a favour, doesn't it). Having work for three months is better than not having work, but a resume full of three months stints in various workplaces will eventually work against you as future potential employers will begin to believe you are somehow deficient and unemployable.

Australia could easily solve the skills shortage crisis if employers would employ the young, the old, the new immigrations, the mothers, the people with disabilities and the people with larger than average body size.

My husband is qualified to work in aged care.


I am qualified to work in childcare.

Neither of us can get work in industries who the media claim are crying out for skilled workers. Him because he's 53 and me because I'm legally blind. The fact that we both care for four active boys throughout the day with all the lifting and supervision that requires apparently counts for nothing.

at May 01, 2012
Email ThisBlogThis!Share to TwitterShare to FacebookShare to Pinterest

How cool that your tweet got published. It was such a valid question. I would have done the iview thing as well!
Sadly (but great reading wise) you are right on the money with this list as well.

Yes, sadly it does seem to be true. If you're a caucasian, 22-39 year old, with a nice anglo name, and an average body size, good health and just the right amount of education (you've graduated from a trade or uni degree), you'll be right. Everyone else need not apply or had better be connected!

With the workforce steadily ageing, there is will definitely be a shortage of skilled workers in future if the Government doesn't legislate affirmative action.