Santa, the Tooth Fairy and the Easter Bunny (walked into a bar...) 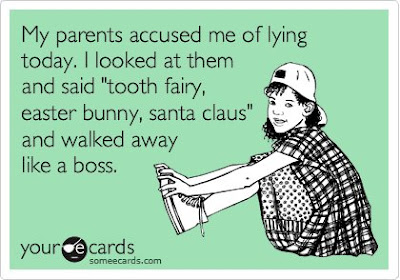 The inference here is that parents who engage their children in fantasies about Santa Claus, the Tooth Fairy and the Easter Bunny are basically lying to their children and setting up a situation where trust will be broken and disappointment will break the child's heart.

I've seen many debates over the years about this issue - the issue of parents being willing to lie to their children about these mythical creatures instead of just saying, 'I buy your presents, put money under your pillow in exchange for a tooth and scatter chocolate eggs around the back yard, it's all me. Those other guys, they're just made up stories for kids who can't deal with reality! I won't treat you like that because I respect you!'

The Grumpy Old Man and I walk a middle ground between 'cold, hard reality' and 'Oh, look, giant powdery bunny prints in the kitchen!'

Our kids know we are somehow in cahoots with the 'fantasy creatures' and quite frankly, they prefer it that way!

It's a cold, hard world where there is no such thing as Santa Claus or the Easter Bunny - and I think it's a rather depressing place to live.

I also think children are far more robust than that.

This need to be ultra-hardcore-real with children is something akin to the 'school of hard knocks - they have to learn about how the world really works some time' approach. It lacks a certain level of generosity, of meeting the child where they live - in a world full of possibilities and void of limitations. If Santa and the Tooth Fairy are impossible, then how can a small child ever hope be a hero one day?

Fantasy is not lying. Lying is about self-preservation. Lying is selfish. Fantasy is generous and giving and full of play - and playing is good for children! The two are simply not compatible!

at May 31, 2012
Email ThisBlogThis!Share to TwitterShare to FacebookShare to Pinterest

We walk a middle road too. I let M have the fantasy but don't add much to it. I do remember being quite hurt by my parents when I found Santa wasn't real. If M ever asks me straight, I'll answer her straight. But for now she hasn't.

Because we blend two cultures (you'd know what that's like), we have the Coca-Cola Santa on Dave's side of the family and the 13 Christmas boys on my side, so we explained to the boys that there WAS a guy (St Nicholas) who worried about the welfare of children, and would give them gifts of clothes and food when they needed them. We says that Pagans celebrated the coming of the Sun which gives life around the time of Christmas (which we celebrate in June), and Christians celebrate the birth of Christ - God giving his love to humanity through the sacrefice of his son -, and so Christmas is about sharing love and Santa is a symbol of love and charity and generosity.

We say everyone is Santa and the Santas in the shopping centers remind us about being generous.

i never made a huge deal of any of it and my kids have said for several years that they know it's me and if it makes me happy then I can continue to pretend LOL
Santa has only ever put a few things in a small stocking for them though as they have a parent who can buy them stuff. some other families need more help from santa