The symbolism of elephants...

A few weeks ago I saw the Samsung Elephant Ad, and watching that led me to watching a video with an elephant painting (seriously, you have to watch it to believe it!).

Then last night the boys told me they were having a free dress day at school to raise money for 'Mali the Elephant' - who turned out to be a paper maché statue which the children will paint and then show around the council before it comes back to the school to stand outside the performing arts room.

Then this morning I followed a link from Twitter to Toushka Lee's blog and read this post about an elephant orphanage in Sri Lanka.

This morning the Grumpy Old Man did another driving test and unfortunately didn't pass. We've booked his next test and are looking forward to that now. About ten minutes before he walked in the door I saw this poster on Facebook... At the time, I didn't know if the Grumpy Old Man had been successful or not, but I knew it would be okay whatever the outcome because this has been our approach to him getting his licence. Every fail has taught him something new, and this one will, too!

Anyway, back to elephants - because now you're completely confused by that segue. I was compelled to research the symbolism of elephants after browsing etsy before and seeing a reference to the belief that elephants with this trunks raised as considered by some to be 'lucky'...

I found this in reference here to elephant symbolism:

To the Hindu way of thought, the elephant is found in the form of Ganesha who is the god of luck, fortune, protection and is a blessing upon all new projects. Ganesha in all his magnificently vibrant elephant glory, is intent on bulldozing obstacles on your behalf (funnily, male elephants are termed "bulls").

In many western cultures, the elephant meaning pertains to: In Christian symbolism the elephant is an icon of temperance, patience, and chastity.

As a Chinese symbol, the elephant is considered a symbol of:

It might be a coincidence that I've been seeing and noticing elephants a lot just recently, but I'm going to take as encouragement to be patient and to know we're in good hands and things will work out!

Also, I may or may not have bought this to frame... 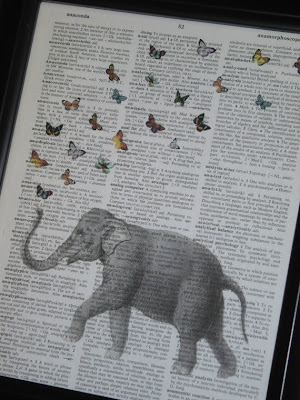 This image totally captures me in this moment! Elephant, butterflies and words - it's perfect!

at May 02, 2012
Email ThisBlogThis!Share to TwitterShare to FacebookShare to Pinterest