Going to Adelaide in the morning, but before I go...

Tonight, I'm so so happy!

I have a sense of happiness which is quiet, but loud at the same time. I want to yell it from the roof tops.

~ after 3 years, four months, and one week of studying, practicing and testing
~ after thousands of dollars spent on lessons
~ after putting up with untold hours of my nagging and lamenting over the past eight years (at least) and most intensely in the past five years
~ after trying one mode, then changing to another
~ after having three different instructors (though one only for one lesson)
~ after eight failed attempts at the final test

GOT HIS DRIVER'S LICENCE!

I'm so proud of him for his determination and dedication and for facing his fears and well and truly overcoming them, for mastering a skill he never even desired to attain, for putting the needs of his wife and his children first and for never giving up!

This morning I was convinced he wouldn't pass. I told him I didn't think he'd pass today and that if he wasn't absolutely sure he would, I was more than happy to save the $140 we'd lose if he did the test and failed. He just smiled and said he would pass. He even joked that he knew he would pass because he had a rare for him pimple on his chin and so, of course he'd pass and have his licence photo taken on the very day he felt like he was growing a second head.

I was wrong. I have never been so thrilled to be wrong!

He passed and we're still pinching ourselves because it feels like such an epic journey - almost all of Ari's life! 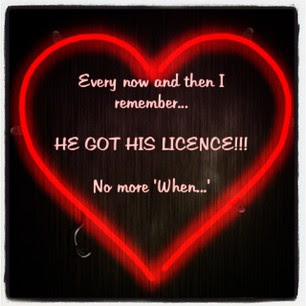 Now we just need to source a car on a budget of nothing, hahaha!

But he's a man with a licence!

at June 18, 2012
Email ThisBlogThis!Share to TwitterShare to FacebookShare to Pinterest

I know what a journey this has been and I know the worries you have had because of it..and now it's over. He has his license. I am so pleased. Congratulations to you both!!!

Congratulations - you must be so pleased!

Yayyyyy!!!! That is all xox