Meet the school mums, Protect the Astor, Meet the friends - Call me Superwoman!

If you popped by earlier because you saw this heading in your blog roll or RSS feed and then found it completely empty - you'll already know I'm no Superwoman... I wrote the heading, then got distracted by upset three year old and posted it, oops!

Okay, what I was going to say - before I got distracted - was that I've had a huge weekend and today I'm totally wiped out, but at the same time I have a great sense of satisfaction over all I've personally achieved.

I've had agoraphobia for many, many years - I first became aware of it during my second pregnancy, and received counselling for it after Lukas was born. For the most part, since then I've kept it in check by forcing myself to get out enough that I don't become crippled by anxiety.

This year though, anxiety and agoraphobia has been kicking my butt. I'm desperate to get out of the house but most days I just can't. The thought of going out there - even just to pick the kids up from school - fills me with trepidation, I get panicky and can easily come up with a multiple reasons I can afford to put whatever off.

I realised about a month ago that it was get really, really bad when I didn't even want to go out to my own mailbox.

I'm not sure I can really communicate effectively what the anxiety is about - something about not being able to see and worrying about being hit by cars, or bumping into people and annoying them, or getting lost, or taking the wrong public transport, but also about being 'in the way' and 'taking up space' without a valid reason (I never go out without a purpose because of those last two concerns).

So, using cognitive behaviour strategies, I knew I had to challenge myself, to prove my fears baseless.

I signed up to be a volunteer at the Emerging Writer's Festival and while I felt physically ill that first night going to the launch of The Emerging Writer - it was okay, I was of use to those around me. I felt good - and I got to be around writerly types (always a bonus!).

The next day, I even chatted with some really lovely people, which was really encouraging.

Bouyed by these little successes, I accepted an invitation to a 'mum's night out' with one of my sons' classes. Let me tell you, I've never been to one of these 'parent get togethers' without the support of the Grumpy Old Man or another 'trusted known person'. This time, however, I didn't know if anyone I knew, even vaguel, would be going. I didn't organise to leave the house with anyone. I just went - on my own - to a place I'd never been to before to meet people I'd never spoken to before (as far as I knew).

And I had fun!

And I found I had stuff in common with these women - besides just having kids in the same class. There is even a Danish mum in the group - and our kids have been at school together every week since the beginning of the year and I didn't know that! I didn't sit like a lump at the end of the table feel uncomfortable. I actually managed to seat myself very centrally so I could participate in conversations to my left and to my right. It was good and the women were all very open and friendly and not scary at all! That was friday night.

Yesterday morning, we'd planned as a family to go to the Protect the Astor rally at the Astor Cinema in Windsor. That meant herding cats kids through large crowds of people. Not at all my favourite thing to do.

However, we love the Astor. The Astor is the most beautiful cinema in Melbourne (and we've been to many, many cinemas in this city), but as it is currently owned by St Michael's Grammar School, plans have been announced to cease public screenings at the Astor so the school can use the property privately (The Most Beautiful Uniform Shop in Melbourne, was suggest yesterday). This would be an enormous loss to the culture of Melbourne.

There was to be a free screening of Labyrinth and as Ari had never been to the Astor we thought this would be a prime opportunity for him to have his first experience there as well as for us to support the protection of the public's right to experience this iconic Melbourne institution.


Some of the Art Deco decor... 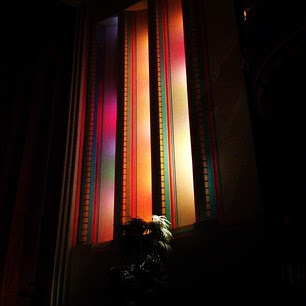 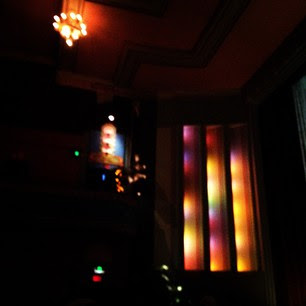 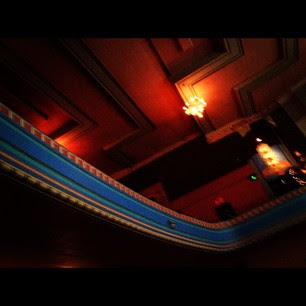 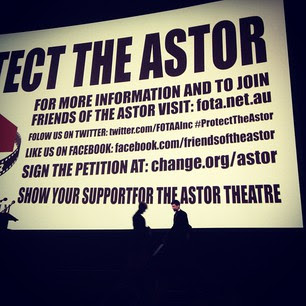 Before the movie there was a Jaffa roll! The Sunday Herald has reported that this did not go ahead... Yes, well, here's picture evidence it did - and the kids loved it! 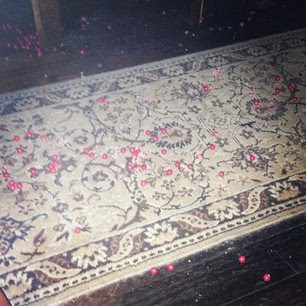 Finally after many speeches - including one on-screen by Tracy Bartram - and just a little whining from Bryn ('Is the movie going to start sooooooooon?)... 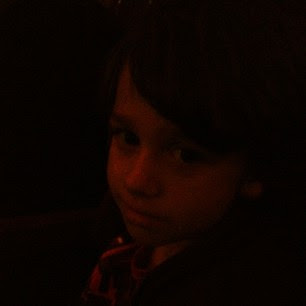 It began! With much cheering and applause from the excited audience at the first sighting of Bowie on screen... 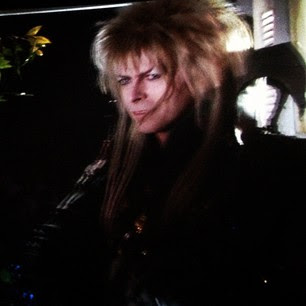 When the movie finished I even managed to run into a tweep! That is; a person I know through Twitter but haven't met in real life. I felt a bit bad about having to say a very quick, 'Oh, HAI! So lovely to meet you in person!' and then having to go because while Bryn and I had been seated downstairs, the Grumpy Old Man and Ari were upstairs in one section and Erik and Luey were upstairs in a different section, and I was certain the Grumpy Old Man would be stressing (and I was right)...

Just as we were leaving, I took this photo of the Astor sign (which I realised when I got home was obscured by a street light)... 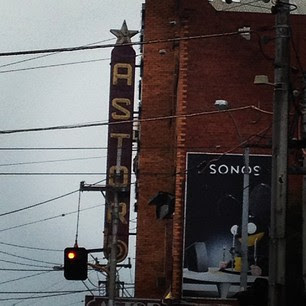 There was talk yesterday that St Michael's may be open to selling the Astor, and that possibly the public may be able to support the purchase of the cinema (through buying shares in it, I'm assuming). The Grumpy Old Man and I would love to be part of something like that!

Almost as soon as we got home, I was headed out again. This time with good friends, so not so much a challenge to my agoraphobia as a reward for having put 'myself out' there this weekend.

We went to Las Vegan Bakery in Collingwood and had pizza (me) and other goodies, followed by a sparkly mini chilli chocolate cupcake (again, me)... And it was so lovely to downscale the social scene to just three people in a tiny cafe talking about life (and of course, a few things vegan) since the last catch-up!


So, that's how I was Superwoman this weekend - in my own, private, little way!

Do you challenge yourself to be Superwoman for your own wellbeing?

at June 17, 2012
Email ThisBlogThis!Share to TwitterShare to FacebookShare to Pinterest

Well done on your efforts, Sif. I also had a tiny *claustrophic* meltdown before going to the Astor in fear of the crowds (*ahem* it's ok to have mentioned me by name ;)* ). But I also went and had an absolute ball. Here's to pushing beyond the fear and discomfort *clink* :)

Oh, oh the shame... Didn't mention your real name because, even though I asked you just yesterday and even though I know I'll remember the moment you tell me - I've got Twitchy so stuck in my head I can't remember! I'm sorry! I've just realised recently that it's not just names I find hard to remember it's actually faces that are the hardest! It's not that I don't care, I swear! My brain just doesn't seem to want to retain that sort of information... There, my embarrasssing secret is out!