I swear there's gypsy blood in my lineage...

This week my mum and step-dad have picked up their new caravan. It's a beauty, it really is! I think at forty, with four relatively young children (still dependant children), the idea of living full time in a caravan kind of scares me. I know it doesn't scare other people my age, mind you. Quite a few people I know have either gone on extended round-Australia trips with their children, or would like to do that. I wouldn't mind going on a month long trip, maybe, but choosing to live permanently in the small space of even a 25 foot long caravan still makes me nervous.

I said to mum yesterday that I couldn't think of anything to give her for her birthday next month because she doesn't have room for even one more thing in the caravan. She said I was 'off the hook'... I think not - I just have to be more inventive. There are plenty of consumables which do not need storage!

Now, I guess, because they can't buy size or quantity, they really will get to focus on quality - the best of what little they can actually take with them on their adventure.

Here are some photos from our catch up with them at Crystal Brook Tourist Park on Wednesday... 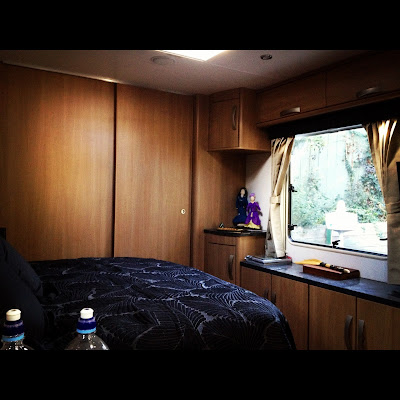 First up there is the "bedroom", you can see the end of the bed there, it isn't pulled out to full length for sleep because we're visiting and looking through the place. The door at the back of the room leads to the shower and bathroom. 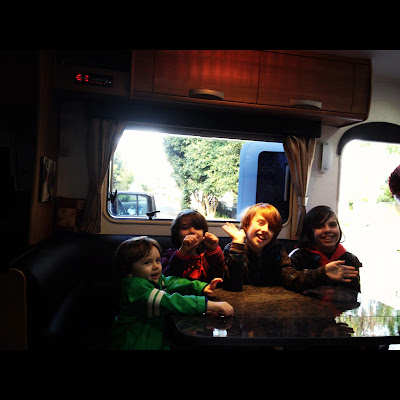 This is the "dining room". I took this while sitting on the "couch" which is opposite the dining nook - unfortunately, I completely forgot to take a photo of the couch, d'oh. It is a double recliner with footrest. The table swivels and can be unscrewed from the floor and moved around or taken outside. 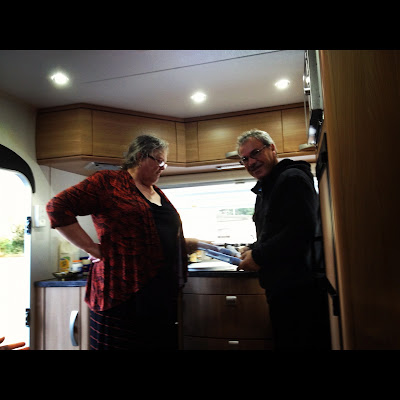 This is mum and step-dad in the kitchen, mum is about 5ft 10 inches tall, so you can see there is plenty of head room. She is standing in front of the oven, while step-dad is in front of the sink and to the right of both of them you can just make out the fridge and the microwave on top of it. 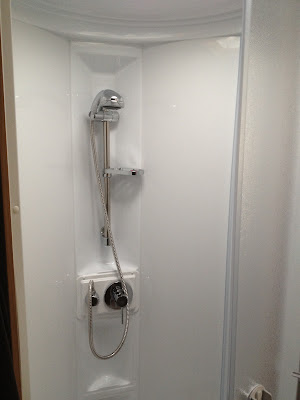 Here is their huge shower - I was very impressed with this shower, I have to tell you. I thought, in a caravan it would be tiny, but it was actually very spacious - bigger than some of the one's I've lived with in rental properties! 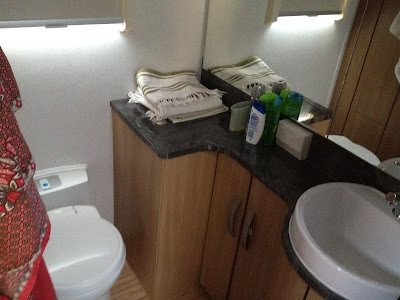 The bathroom is equipped with a toilet (for convenience use at night only, LOL, otherwise it's the park toilets the rest of the time, and for guests!), a sink, and in the corner there - hidden from sight is a washing machine. 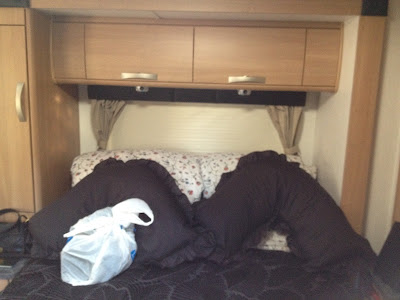 Here's a slightly blurry photo of the bed head  - you can see an iPad over on the right there... They had electrical sockets put on the either side of the bed frame so they can charge their iDevices, hahaha! It's the little things that count (and I a teensy bit jealous of that!)... 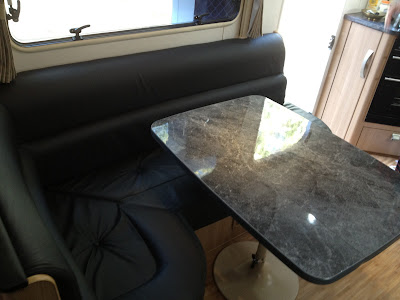 Here is the dining suite with the table turned the other way. They were originally going to get beige (it was called sand or something, but I honestly think they were just trying to make heige sound less, well, beige!), but I really much prefer the black they went with in the end! The couch can be brought up to the table to create larger nook if guests come for dinner. The table has a fold down flap on one side to make it narrower. 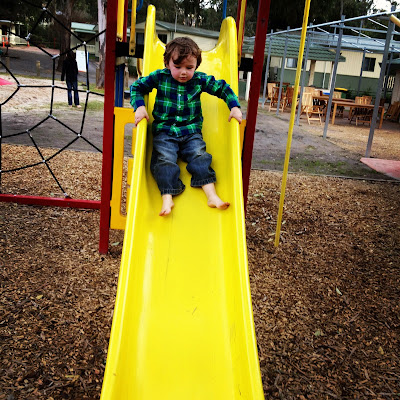 A cold Melbourne winter's day and Ari is barefoot, the flush in his cheeks is from running around like a crazy person! 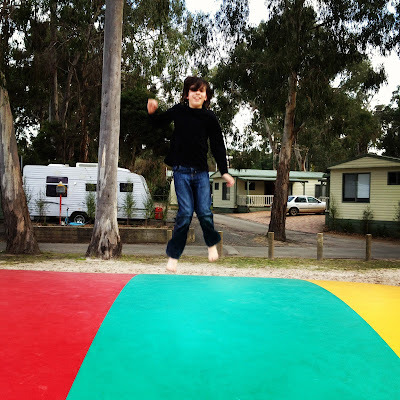 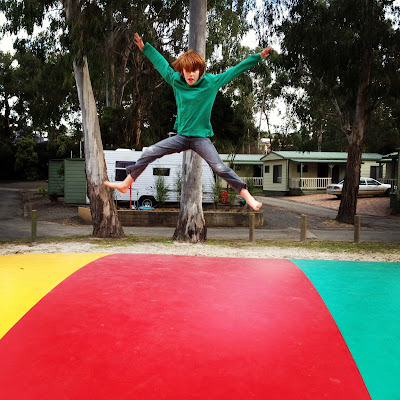 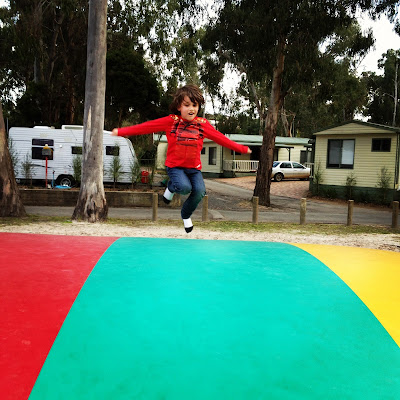 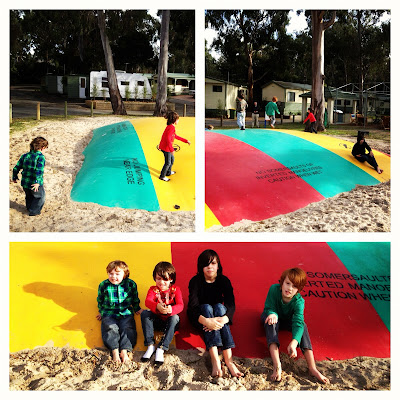 A giant jumping pillow is always a hit with my boys! 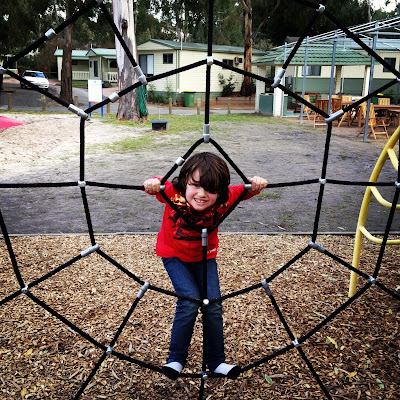 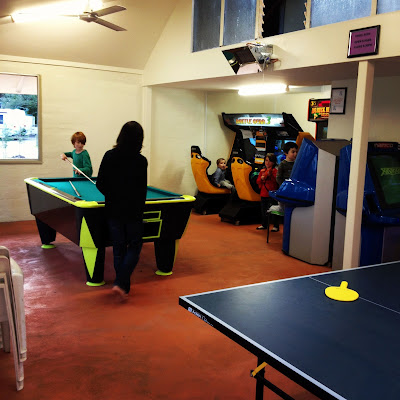 And then they discovered the games room, and I thought all outdoor play would be forgotten, but after a couple of rounds of Norwegian waffles with grandad and amma, they were right back out there on the jumping pillow again until we had to drag them away in the end.

at July 13, 2012
Email ThisBlogThis!Share to TwitterShare to FacebookShare to Pinterest