Last Sunday the Grumpy Old Man, Erik, Luey and I headed off into the city. My friend Jayne got up far too early on a Sunday morning to come and watch Bryn and Ari for us.

We had an invitation for four to attend the opening of the Local Landscapes exhibition at the Ian Potter Centre at Federation Square where Erik's most recent work was being exhibited.

The opening turned out only to be for the children from Erik's school. Out of the 20 children who participated about half turned up for the opening.

The director of the project had a talk about what the children had learned during the initial seminar and presented them with certificates of participation. Then we were all shown upstairs to see the children's work.

Of the eight schools which participated from all over Victoria, four had their works on display on Sunday. The standard of work varied but it was wonderful to see than children had been encouraged share a place which was meaningful to them by painting it and writing about it.

Here are a number of photos I took on the day including several of the works by other students from Erik's school and from other school which I felt really stood out.

These first two photos are a bit murky, but when I tried to use flash, they came out green... 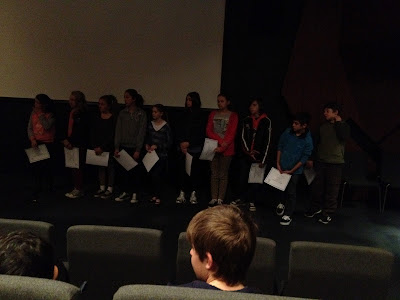 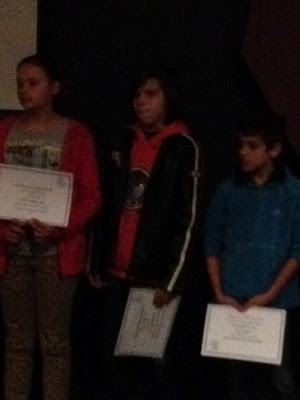 The exhibition was in a small room upstairs which looks like a room they probably usually conduct art classes or workshops in... 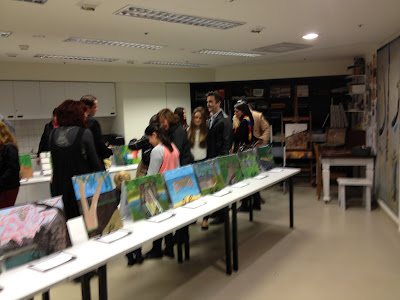 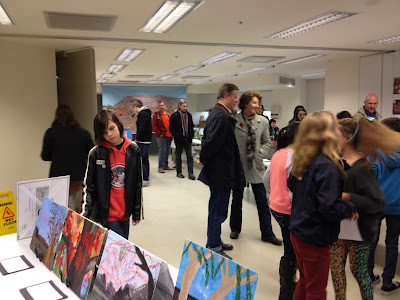 I wanted to take a photo of Erik next to his painting but there was a bit of crowd to see it! Erik was kind of embarrassed. He wanted me to wait until everyone had gone home before taking a photo of him because otherwise, 'They'd all know it was me...' They all already knew it was him - being that they were parents of kids from his class and school (and the kids pointed him out to their parents). All the attention gave Erik a dry mouth and a headache! 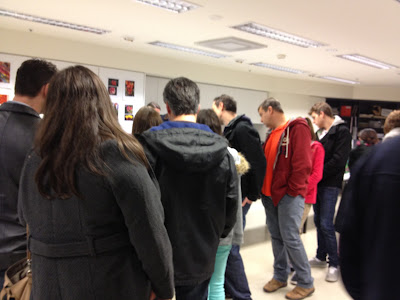 While waiting for a chance to get a photo of Erik I went around and took some photos of other paintings I thought were amazing!

The young artist who painted this was only 11 years old! 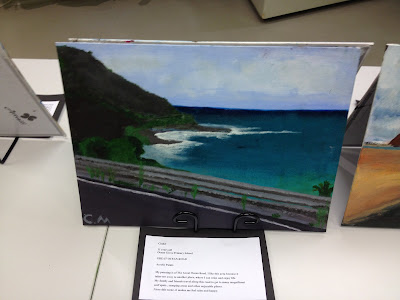 The painting on the left here is by one of Erik's close friend's! 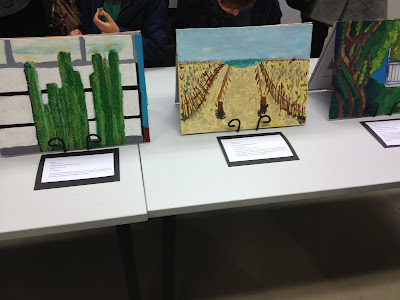 I really love the imagery of these two paintings, particularly the one of the right! 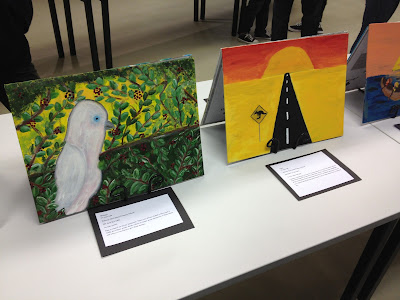 The use of light in this picture - by a boy in Erik's class - is wonderful! 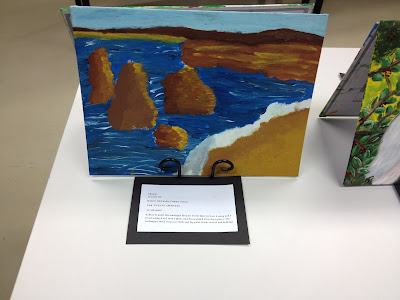 The painting on the right is by Erik's best mate and is of Mt Buffalo. 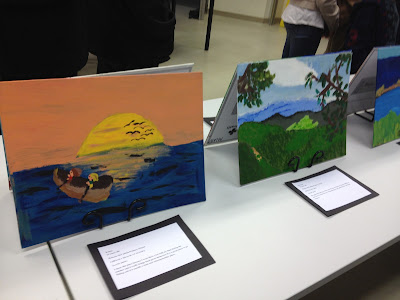 This painting is from a different school, but I like the use of colour here. 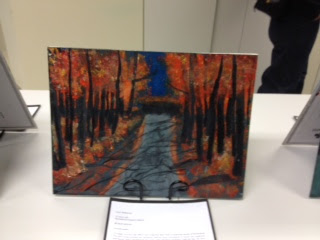 This was the only painting to use this technique out of the ones displayed on Sunday and I thought it really stood out as an example of how children really can grasp impressionism and texture in painting (or even post impressionism - as the GOM has just informed me), using a technique called pointillism similar to that used by Seurat 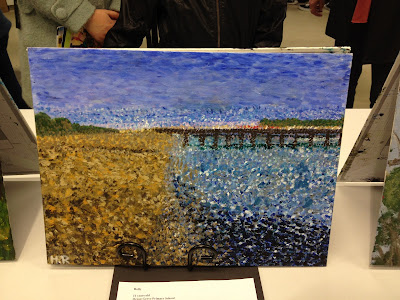 I particularly like the water in the following painting; the use of brown in the water - which is something children often don't see when painting. 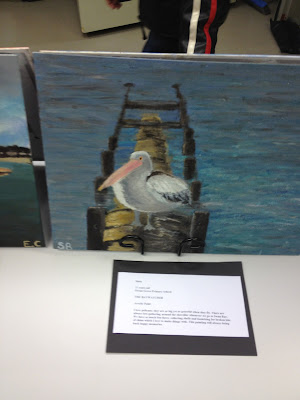 This painting was my absolute favourite! This is the lighthouse at Point Lonsdale - which is where the Grumpy Old Man and I had our honeymoon. I love the use of light here and how the colours are blended, especially in the shadows on the lighthouse. Amazing work by such a young artist! 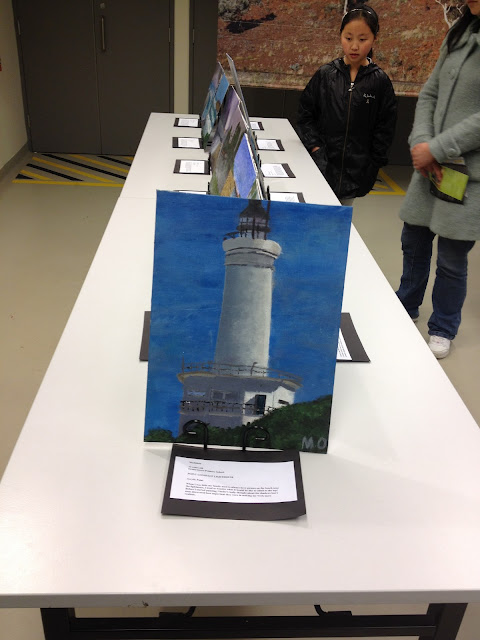 Finally, Erik's art teacher wanted to take a photo of Erik next to his painting and I used that opportunity to snap of a pic myself. You can see how overwhelmed he was by the attention by the way he is slightly hunched over, poor kid! 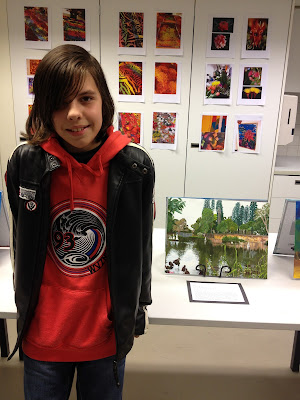 The director of the exhibit then pulled us aside. She said she'd been waiting all week to meet Erik. She asked him what else he had painted and where he'd learned his technique. We explained that he had had next to no formal training but his dad, an old grapho, had walked him through the steps of gridding out the painting and blocking out the shapes, painting the background and then working in the foreground - paying close attention to detail. I said I realised a lot of painters these days didn't believe in grid referencing photos, but to my surprise the director was very supportive of how Erik had been mentored by his dad.

She was very excited about his natural ability and took down our contact details and gave us her card. She wanted to know which high school he was going to - if it had a good art program. We told her about hoping to get into Templestowe College and about the art studio they offered their most enthusiastic artistic students and she was keen to contact the headmaster to ask him more about it - I really hope she does!

She said there were probably a couple of artists working with the National Gallery of Victoria (of which the Ian Potter Centre is an annex) who would be interested in meeting Erik and possibly mentoring him. She wanted Erik to meet one artist - Vincent Fantauzzo - that day, but Vincent was not at the gallery. She took us to see an exhibition he was currently presenting called 30 Inspirational Australians in 30 Days, where he'd undertaken the challenge to paint thirty portraits in as many days. I was completely blown away by his work! 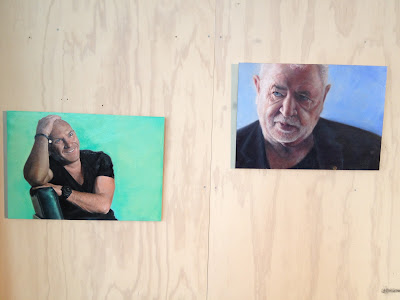 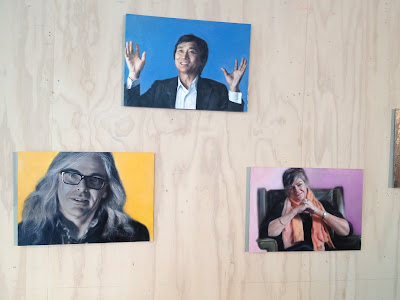 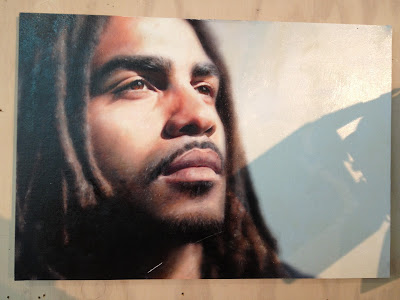 I would personally like to interview this artist for my PhD!

As part of his exhibition Fantauzzo also had an interactive graffiti wall, and Erik added his own mark to it... 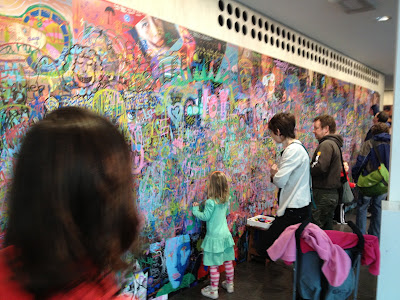 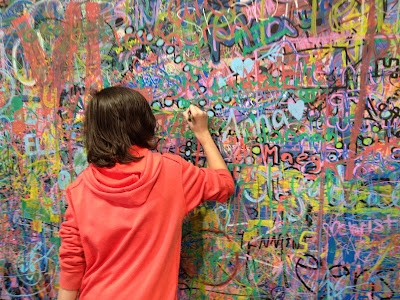 It was a great morning out and I can see so many doors opening for Erik! Of course, it's up to him to take up the invitations to walk through those doors, but we're more than happy to support him each step of the way!

at July 04, 2012
Email ThisBlogThis!Share to TwitterShare to FacebookShare to Pinterest

Congratulations - it certainly is looking really positive for Erik. I wish him every success in the future !!!
Have a great day !
Me

I saw the Fantauzzo exhibition and got to add some embellishments to the art as well - at the beginning when it was more photos than ink. it would be amazing to see a video of it changing and the artists coming and going adding all the layers. What a talented young boy you have there, you must have been chuffed.