Ari loves trains, trams and buses! Musical clocks? Not so much!

Ari is constantly pestering us to go on train rides. He just loves trains! He also loves trams and buses, but trains hold some sort of magical attraction for him.

Yesterday, I had to go into Melbourne University to get a new copy of my Masters transcript, so we decided to make a day of it and the Grumpy Old Man and Ari came with me. Ari was thrilled to be able to go on a train!

He's such a little man on the train. Unlike his oldest brothers who have only learned to sit quietly on trains in recent years, he sits very still and quite.


Often he likes to read the paper if he can find one... 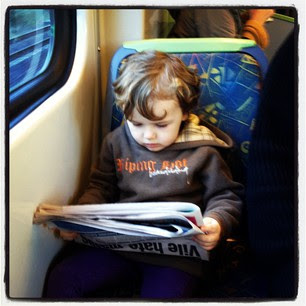 Sometimes, he likes to look out the window and spot all the other trains and buses and trams... 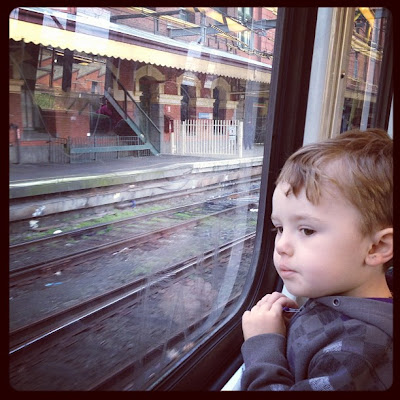 Yesterday, we got off at Melbourne Central Station. I love this station - not for the shops - for the architecture, well some of it, anyway... 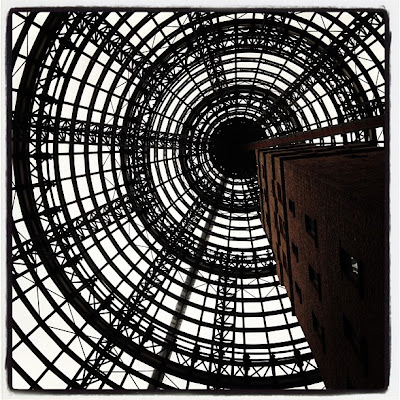 I noticed we were just in time to watch the clock at Melbourne Central do its musical number. Ari had never seen this, so I thought it would be a lovely surprise for him. At midday, the bottom of the clock descended and the melody of Waltzing Matilda started to chime. Waltzing Matilda always makes me feel very patriotic. I'm one of those people who would have voted for it to be the national anthem if I'd had a vote back in the 70s. This rendition is especially beautiful.

Ari seemed totally mesmerised by the clock, he held one position the entire time it played and never shifted his eyes away from it... 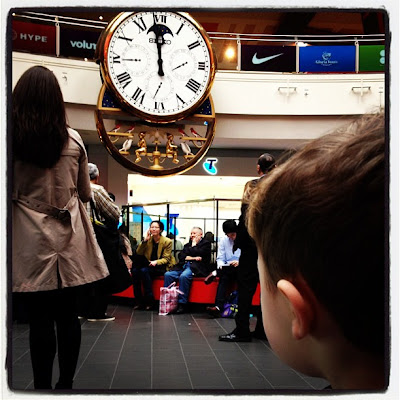 I loved how transfixed he was by it...

That was until the music ended and he still didn't move. I tried to gain his attention, but he wouldn't shift his gaze from the clock even though it had stopped playing and the little figures had ascended back into the body of the clock.

I crouched down to talk to him and realised his expression was the same as when he's been told off and he goes into himself and shuts out the rest of the world. He slumped onto my shoulder and buried his face in my neck. He didn't cry, he just went completely passive. Something about the clock had upset him quite a lot.

He couldn't tell me what it was - he didn't want to talk at all.

The only thing I can imagine is that clocks aren't supposed to transform like that and play music and have little figures living inside them. This clock upset his concept of what clocks are.

This event has taught me something about Ari and how he interacts with the world. He decides how things are, for example, when people go on trains their sit quietly and read the paper or stare out the window. He is quiet happy to work within the framework of how something 'is'. He doesn't like surprises so much. He's not a big fan of the unexpected. Clocks are supposed to hang on walls or sit on mantelpieces or wrists and be looked at, they not supposed to move autonomously!

I'm glad I had the opportunity to learn this about Ari yesterday because it means I can help him adjust to the idea that sometimes things aren't what you expect them to be, and sometimes you need to adjust your expectations in order to enjoy something. Change can feel threatening, but it doesn't have to feel that way. Now I can look for ways to gently introduce the idea that the unexpected can be wonderful, funny, and interesting!