Everyone has their own challenges to overcome, their own measure of success.

Earlier this afternoon I posted this poster on Facebook. 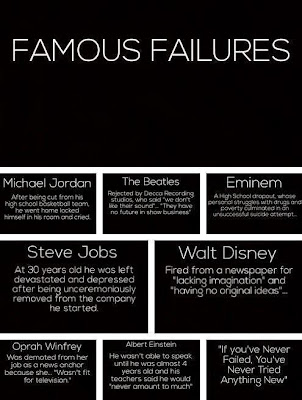 And told a story of how an ex's cousin had put me down many years ago because my ex had a degree and I had deferred my own degree - and the cousin assumed I'd dropped out. I ended the story by saying he may have one degree, but I now have three. In other words, I turned out not to be the failure this cousin had thought I was.

To my surprise the first comment in response to this post was set to dress me down, saying that letters after your name is not the only way to succeed. I realise this comment came from a place of hurt and upset in the person who posted it. That person has had a lot to deal with lately, I totally get that. I have offered my support where I could.

Nonetheless, the comment was wholly uncalled for. I was not saying degrees were the only sign of success.

All my life I've had to work pretty damn hard to be consider 'equal' to other people. I have two disabilities which affect my life. I have low vision and ADHD. These disabilities create significant challenges for me. I can't read as fast as other people, for one thing, and I have serious organisational challenges as well. No one was surprised when I failed year ten at high school and was forced to drop out.

In fact, on many occasions my parents were told if I ever worked, it would only be in a sheltered workshop.

When I did my Grad. Dip. Ed.. I learned about Howard Gardner and his theory of multiples intelligences and since that time, I've been a huge advocate of this theory. I don't believe academic intelligence is the only one worth measuring. Likewise, I have always argued that high intelligence quotient and high achievement at school is not a guarantee of success, but more than that, I've always be a strong advocate of happiness being the measure of success!

I've always said that if my boys grew up to be beach bums, but were content in their lives, then I would consider them successful.

So, right now I feel deeply hurt. That comment sent me in a steep downward spiral. I've worked so, so hard to achieve the degrees I have.

I can't get work like other people, so cannot measure my success in money earned or hours worked, but studying makes me happy and gives me a sense of purpose. Having those degrees is a measure of the hard work I've done over the past twenty years. I'm hurt that I can't be proud of that without being passively accused of academic elitism. Besides my kids, I have nothing to show for my life other than these degrees. I have no house, no business, no career, no savings. I have letters and for a person who is legally blind and has ADHD, that is a big deal.

Wow Sif. Nothing like writing a whole post about someone without addressing an issue privately. Or tweeting about them. Nice.

My reaction was about academic elitism yes. I agree with the poster you put up. Absolutely. Your implication that your having three degrees to that other person's one was somehow indicative of greater success smacked of academic elitism to me. I don't see how else that could have been construed in the comment you wrote.

I am astonished that you feel the need to call me out in such a way. Utterly astonished.

You know what, Kate, that was absolutely not the only way to read that in the context of the meme itself. The people in the meme had all been told they weren't good enough, and all went on to be far more than 'good enough'. In that context, I was also showing I had gone far beyond the mark set for good enough (having a degree).

Your words totally came out of left field for me. They accused me of something I actively fight against. Frankly, they were not worthy of the person I have always believed you to be. I'm not pretty or popular, I have nothing anyone admires except my ability to, slowly, work my way through a course, it is what gives me a sense of self, but you felt the need to come along and say, 'So what? They're just letters.' To lots of people they are just letters, to me they are proof that I'm not a complete waste of space.

As for privacy, practice what you preach. If you had a problem with me being proud of my achievements? If you thought I was having a go at people who haven't or can't gain letters (through no fault of their own, might I add - evidently you think very little of me, which hurts more than you'd think - as if I'd have a go at your boy, I adore that kid from afar these days but he has always had a special place in my heart, him and O), why not message me instead of having a going on Facebook?

I think it is amazing what you have accomplished given your low vision and ADHD. For many years I didn't get jobs I was more than capable of doing because I didn't have a degree. I studied part time while working full time and having a baby and finally got the piece of paper that everyone put so much faith in.
Be proud of what you have accomplished !
Have a great day.
Me

I think the discrimination against people who have skills but no degree is reprehensible! My brother, husband and father have all had that experience as well. Well and truly qualified in skills sets, but no paperwork. It's bullshit! Sorry you experienced that!