Do you ever feel angry and just don't know why?

At the moment everything irritates me and annoys me. I'm a little concerned because I'm feeling very uncharitable. I don't seem to have a lot in the way of compassion or sympathy for other people. I really don't like this feeling at all.

I'm not exactly sure why I feel this way.

The quick answer might be that life is stressful, but that's not really very helpful because life is always stressful. As far as I can see everyone's life is stressful (and they don't seem to be irritable all the time). Life has been stressful in this house for a long time and that is not set to change any time soon.

Or maybe that is the reason.

I keep waiting and hoping for things to change and they don't and I resent it because I feel we deserve a break.

Then again, life is not as stressful as it has been.

I'm finally figuring out how to live on this small income and even put a little bit of money aside each fortnight (for Erik's start at high school). That doesn't leave much in the budget - I have about $48 pocket money each fortnight. The Grumpy Old Man has a bit more because I only ask him to pay for half the food (I pay the rent and utilities out of my money, but I also have free public transport). He, of course, will give me money for things - like the school mums' dinner last friday - and he has to pay for incursion/excursions and so on for the kids.

Forty-eight dollars every fourteen days doesn't stretch to much, but then again I don't go anywhere, either. I pretty much stay home and write or do household paperwork, arrange appointments, oversee Erik's painting and so on.

The anger might be tied in with the loose ends thing. Ha! 'tied in', 'loose ends', see what I did there. I crack myself up!

So, the anger may well be rooted in the concept of idle hands being the devil's playground.

Yesterday I got out into the sun and Lukas and I cleared the back patio. I'd called the council last week to arrange a hard rubbish collection at our house this week. I finally got rid of the king sized mattress which had been propped up against the house outside the back door (I couldn't go out there, it looked so much like we were derros who didn't care - I was embarrassed when the lady came to cut Jacob's coat and saw the mattress on our back patio (along with sundry other bits and pieces and weeds popping up between the pavers).

So, with the mattress gone, I got Lukas to chuck out the bits and pieces that had collected around it (thanks boys), and we weeded the pavers and cut back the trees and set things up nicely and now it looks so much more inviting for Spring and Summer. 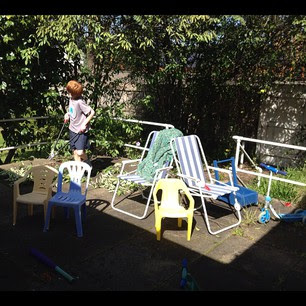 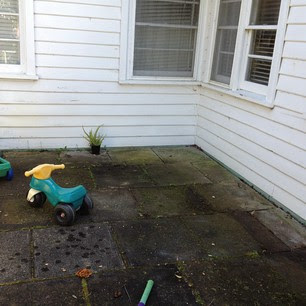 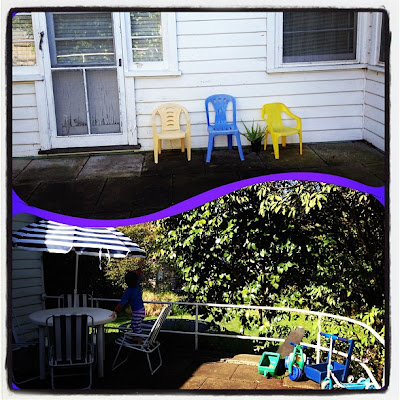 The physical work was good for me, but the anger was still there and I had to resist losing the plot over the state of things.

I so often feel that the Grumpy Old Man and the boys just don't care about how we live. The amount of mess they can tolerate is so much higher than me - to the point where I wonder, if I wasn't here, would they end up on one of those hoarders shows? They do clean up, when I tell them to, but that makes me angry, too. Why do I always have to tell them?

MIL said something last week that I can't get out of my head.

She had a tree limb from the neighbour's house come down on her roof and put a small hole in it. She called the SES and they came out and chopped up the limb but wouldn't remove the pieces for her and wouldn't touch the roof because they said it had asbestos in it. This all happened late morning, but she didn't call us until 4pm. At that stage the hole in the roof was still open to the elements and rain was forecast for that night.

So, the GOM hauled butt over to her place in a cab we couldn't afford, so he could go with her to let the neighbours know (at that point she was under the impression it was their job to remove the pieces of limb from her yard, she later found out it was not their job), and I got on the phone to hire-a-hubby to see if they would cover the hole with a tarp for her.

Ultimately, it all worked out thanks to mine and the GOM's resourcefulness and the hole was covered before the rain came.

The following day I was talking to her on the phone. She'd had the insurance people out and they were telling her she needed an entirely new roof. They said patching the holes (they found two more) was not good enough. Now, MIL has the funds to put on the new roof (insurance covers most of it, apparently), but the GOM felt she needed a second opinion.

So, we talked back and forth and of course, the subject of saving for rainy days came along, and she was talking about how people lose their homes because they have so much debt and I said, 'That's the main reason we aren't worse off now, we have no debts.' To which she replied, 'Well, yes, and the fact that [FIL] and I have loaned you so much money over years, it's at least $20 000, and you've never repaid a cent and seem to have just forgotten about it.'

... <--- That's the space where I have no words (words I would want stored here for all eternity, that is).

Not a thing she said was untrue. Except maybe the bit about having forgotten about it. I haven't forgotten about it. I can't speak for the Grumpy Old Man. I'm only far too aware of the bonds they have given us (when we made it very clear we couldn't repay them), and the food money in recent years as well. I hate accepting money from her and not being able to repay it.

The thing is, we have also forgone opportunities to live where housing is cheaper and where we would have a better chance of getting work because we've had to stay close to her and FIL to help out practically. Has she forgotten that? As I write this, the Grumpy Old Man is at her place doing grocery shopping for her because she can't do it herself.

Things are tight, but I'm more determined than ever not to take another cent from her. I said to the GOM last night that Christmas this year would be lean and we might not be having our regular Christmas dinners because I won't be letting MIL buy Christmas dinner this year. She is welcome to join us, but we'll be eating within our means without her assistance.

I feel that I'm such a failure in my life because I cannot provide properly for my family and I want to change that. It seems that I keep going in circles trying to make that happen though. MIL's words hurt, possibly because they're the truth. By true, I mean, we have not been doing it on our own, we have not been managing like adults.

The anger is omnipresent. I feel as if I'm jealous of everyone. Everyone seems to so much better off than we are.

I need to stop feeling like this. I just cannot figure out how.

And we're not starving. We pay our bills. We pay our rent. We have toys. So, we're not so badly off. So, I also feel angry at myself for lacking gratitude and compassion and sympathy and calmness and generosity.

at September 10, 2012
Email ThisBlogThis!Share to TwitterShare to FacebookShare to Pinterest