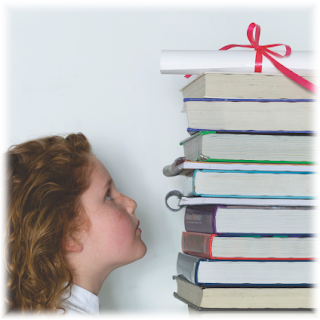 I went to great seminar on early literacy yesterday - it was wonderful to have something for those old synapses to snap over, I have to say.

There were three or four speakers, but the one who stood out to me was Tony Wilson. I had never actually heard of him before, though it seems he participated in Race Around the World back in  and has since then been writing children's books.

He was speaking about how literacy begins, and particularly how it begins before children actually get to school and start learning their ABCs. He said studies had been done which showed that language acquisition and vocabulary developed in early childhood supports the development of text based literacy. He said, it has been shown that children of higher educated parents tend to hear an average of 2200 words per hour, whereas child from lower socio-economic households (he said 'parents on benefits' but I'm assuming he means parents of lower end-point education) only hear 600 words per hour on average, and that this disparity is reflected in reading skills acquisition at school.

He also said in Finland - yes, of course Finland, poor Finland, people are going to start resenting you like the nerdy, bookish kid in the class who makes all the other kids look stupid - the first year of school; whether you call it prep or kinder, encompasses play activities designed to develop spoken language skills - songs, word games, story-telling etc. He said this helps to lessen the gap between children whose parents spoke with them a lot, and broadly, and those whose parents were busy just managing to get food on the table and pay the bills.

Tony spoke about how children who don't learn reading skills well in prep, will find it even harder in grade 1 and harder again in grade 2, and after that they're pretty much on their own as teaching focus shifts from 'learning to read' to 'reading to learn' in grade three.

He spoke of how underdeveloped reading skills promotes challenging behaviours in class, which can lead to early school exits and lifestyles which land adolescents in jail. He spoke of a program a mate of his has run in one jail to improve literacy and the difference this makes to prospects of inmates when they are released.

All of this came back to making learning to read an enjoyable experience with a solid base in language acquisition and vocabulary building.

So, anyway, today I went to school pick-up bursting with this new perspective and I told another mum about it because I thought it was so wonderful, especially in the light of Australian education moving more and more towards attempting to teach reading skills in kindergarten, to 3 and 4 year olds, when their language skills are even less well developed than they are in preps... And to my great disappointment, the response I received was, 'Yes, but what about the kids who don't need to be 'brought to the same level'?'

Her inference was that children who had better language skills already would be 'held back' by another year of playing games and singing songs.

I don't understand this way of thinking.

Firstly, I was a child who at four-and-a-half, could already read. At five, while the other kids in the class were learning 'a' and 'the', my teacher (who was brilliant, by the way) set me the task of writing a story book and illustrating it. This didn't hold me back, nor did it distract her from the task of teaching the other students. Hearing the other kids learning their ABCs only reinforced my own previous learning.

Secondly, if we neglect the students who haven't had the benefits of broad language acquisition before starting school, those students are more likely to feel dis-enfranchised by grades 2 and 3 and will become the disruptive spirits in the class when reading is no longer being learned, but being utilised to learn.

Thirdly, Australian literacy levels are appalling (I am referring to functional literacy). In most of Scandinavia children do not learn to read until they are seven, and yet, their literacy levels outstrip ours. Learning to read early does not make the reader a better reader, or more intelligent or more capable. Many children in our schools struggle with reading in the first year or so of school, and it damages their self-esteem, they begin to believe they are hopeless or cannot learn, and then suddenly in the last half of their second year it all clicks into place for them - because that part of their brain has snapped ON... Coincidently, most kids have turned seven in the meantime. However, if that happens after a child has decided reading is 'not for me' or 'is boring' or is 'potentially threatening to my sense of self as a capable person', the love of reading may be lost. It becoming a means to an end, rather than an enjoyable pass-time.

I was relating this story to the Grumpy Old Man and he said it reminded him of an old Aussie saying, 'Bugger you, Jack, I'm all right.' In other words, the attitude of 'Don't pull me down, just because you can't swim.'

If we don't support those children who have not developed robust language skills by the time they reach primary school - we may end up paying for that attitude through our tax dollars down the track...

at October 24, 2012
Email ThisBlogThis!Share to TwitterShare to FacebookShare to Pinterest

Isn't that what already happens? In SA kindy-which is the year before school starts is basically that. Then in reception at school(prep I think it's called interstate) they start doing more formal things.

I have been listening to the kids in Flynn's class(reception) read for most of the year and the range of reading levels is staggering. So is the variation in the amount of reading done with the kids in their homes. We are not at a low SSE school either.

I would have been underwhelmed by her response too Sif. Many people just don't realise how different all kids are and that at those ages you need to inspire a love for learning and reading.

Oh that response would have frustrated me incredibly! It's elitist and selfish yes. And misinformed because all the studies seem to suggest that a further play based year of prep (the first year of school, called variously kinder, reception etc-soy custard I think you're referring to preschool or kinder, whereas Tony was referring to the first year of primary school, called prep in Vic. It's so very confusing and I have no idea why all the states have to call it different things!! ) is optimal and delaying learning to read formally till grade one is beneficial to many kids. Those who are ready surely could be accommodated at home?

The vast differences in reading ability you see in Flynn's class will likely narrow by the end of junior primary (end of grade two), but some children, those who didn't get a great language start in life may well never 'catch up' which puts them at risk in our society, and in some cases they may become a risk to our community.

Reading with a child is great, but speaking with a children is better. Our youngest reader, our most accomplished reader (Bryn, he's seven and reads novels now), was, in fact, the child we neglected to read with, he was our third child and we became slack. However, he was spoken to the most, by the most people on the broadest variety of topics...