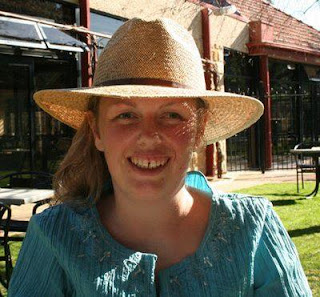 I was up until 5am this morning with insomnia. Partly because I'd slept so long yesterday morning, partly because I also fell asleep while putting Ari to bed yesterday evening.

I both love and hate being awake during the night.

I love it because the house is quiet and I can watch trashy television like Happy Days and The Love Boat (I love The Love Boat) and Charmed, and I can think. It is so much harder to think these days with four kids in the house and stuff to do and the Grumpy Old Man around all the time...

I also hate being awake at night because I can think. I always end up dwelling on how life is, and how I wish it was and mistakes I've made - or that the Grumpy Old Man has made, and of course the frustrations of not being able to make the kinds of changes I feel I need to make to be happy.

In the wee hours of this morning I found myself going back over my blog. I've been writing this blog for almost seven years now. Reading my early posts I sometimes wonder if I've changed at all in all that time. I still feel so naive, so child like (I prefer child like to childish because I have an ego).

I came across the above photo of me, taken in September 2006 and I barely recognise the girl in the photo*.

I had some really awesome photos taken of myself on Friday by a talented emerging photographer, and when I have the CD I plan to share a rather long and completely self-indulgent, self-love post featuring a great many of those photos - for now I'll share one...

The reason I barely recognise the girl in the first photo is that she was an optimist who believed her future could only be better than her present, even though she felt her present was everything she had ever dreamed of.

The girl in the first photo had not endured almost four years of constant anxiety, of wondering how things could possibly get worse and fearing they she would soon know the answer to that question - which she did time and time again. She believed with every fibre of her being that she was in the hands of a greater power; a kind and benevolent carer.

The women in the latter photo is much wiser, but that wisdom is borne of hardship (I guess most wisdom is borne of hardship). She is more sensible and has fewer, though possibly more realistic, expectations of life. Her life also feels very small. She feels very small. She often feels very alone - not as in amongst people - but in the Universe. She is tired, always tired, mentally moreso than physically. Physically she is restless - she often wants to punch walls. She longs to sing, literally and figuratively, but feels choked... literally and figuratively.

A friend said the woman in the latter photo has a story. She does, but it's not the story she thought it would be, and she is still unsure of how it will ends now that it has wholly discarded the plot she had always believed it would follow.

I feel that I have aged twenty years in the past six, eighteen of those since 2009. I want to find the girl again. I know I can never completely go back, but I want her optimism, her mental energy, her confidence and her contentment.

at October 21, 2012
Email ThisBlogThis!Share to TwitterShare to FacebookShare to Pinterest

Thanks for sharing your heart-felt blog. Whenever I'm overwhelmed and feeling sad I remember something my sister said to me - "what a difference a day makes". For me it is often all I need, that is, 24 hours and a good sleep and then the world looks different. I should add I don't have children and I'm sure that makes a huge difference. So maybe the quote could be changed to "what a difference a good sleep and a bit of "me-time" makes. I hope you're feeling more rested soon. Best wishes.