Maybe I'm not a person?

Having a bit of a laugh at myself today.

I've said it many times before, but never really thought about it.

I don't get people.

It occurred to me though, that it's a very strange thing to believe about yourself; that you don't get people or you don't like people. It's very strange because ultimately I am a person. Well, in theory, anyway.

Because sometimes I wonder. Maybe I'm not a person? Maybe I'm an alien to this planet and just don't know it. Maybe I was sent here to observe people and one day I'll be teleported back to the mothership and they'll download all my observations from my database (brain). I mean, it sort of makes sense, right, the fact that I wouldn't know I'm not a person because that would help me observe humans more authentically.

It's a bit unfair though, don't you think that, given my lack of proper understanding for humans, that I'd be dumped here with no understanding of my alien origins - an understanding that might help me not feel quite so out-of-step with the rest of the human race.

I've heard many times that this sense of alienation I feel is very common amongst humans. That must be some sort of genetic fault considering the social nature of the human race. Surely a species which relies so heavily on belonging would have some sort of protection from feeling alienated by their own species most of the time.

Although, here's a thought... The need for ego in humans - it is ego which has seen the human race develop and evolve as quickly as it has - is probably the thing that creates the sense of alienation. I mean, it's ego that makes it so hard for me to relate to others. My very individual nature (something all humans possess to one degree or other) is what stands in the way of me getting other people. They are not like me, they don't react to things the way I do. They don't feel what I feel and cannot empathise most of the time. And this is something most humans experience, I think.

So, not getting other people, and not really liking most other people is probably the greatest indicator that I am, indeed, a person! 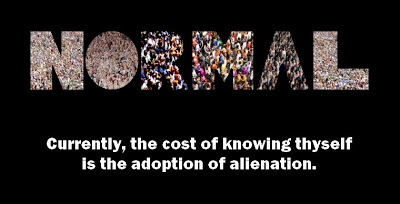 at November 19, 2012
Email ThisBlogThis!Share to TwitterShare to FacebookShare to Pinterest