Secrets of a happy marriage...

Today the Grumpy Old Man and I are celebrating fourteen years of marriage. This is apparently our gold anniversary (which seems odd to me because it's not even a big-0 anniversary, but there you go)!

I would say we are happily married. Fourteen years on our marriage is as solid as ever. I guess that is a relative term, I mean, I could be saying we were never very solid and so we're as solid as ever, but no, I actually mean, we have a solid marriage, we work as a team, we're committed (and sometimes we feel like we need to be committed!).

Marriages start with wedding days, so lets start there...

The Grumpy Old Man and I got married at 10.30am on Saturday the 14th of November, 1998. This was actually the date on which I was supposed to be marrying another person with the same initials as the Grumpy Old Man - I guess I was always destine to get married on that day, I just had to find the right D.B.!

In attendance at the ceremony were the GOM's old friend Bev and a work colleague of mine, Marion and her boyfriend. These are three people we have not managed to stay in contact with over time. No one else was at the ceremony, and no one else knew about the ceremony. The main reason for this was because the various branches of my family could not be civil in the same room as one another at the same time and I wanted the day to be a happy one!

I wore black - head to toe black, and I had black hair as well - mum likes to say I was going through my gothic phase! The Grumpy Old Man wore dark grey and black.

We have no official photos of the day because the photographer was rubbish. We have the proofs somewhere but couldn't bring ourselves to pay good money to have terrible photos printed (including one of the Grumpy Old Man standing behind a cast iron gate, looking as if he has just been imprisoned!). Somewhere, I'm not sure where, we have one photo Bev took of us. It is not framed - our memories are all in our minds eyes.

I was also about seven weeks pregnant, but this was planned. Everything was planned! As evidence, I would like to submit the receipt from the booking of the ceremony about four months before the day! 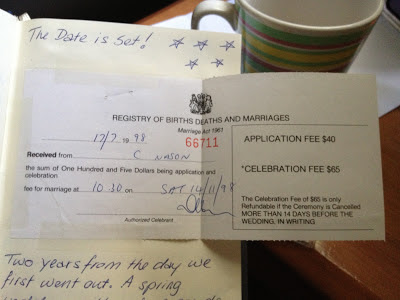 We honeymooned at Point Lonsdale from Saturday afternoon until Monday afternoon. We didn't consummate the marriage until March 2000, though. It's funny, I only realised this last night! They say a good sex life is essential to a good marriage. I'm here to tell you, it isn't. We had a great sex life before I got pregnant, and then for the next twelve years it was pretty appalling, actually, with great long stretches of celibacy! And yet we have always been very affectionate. I'm sure you'll be relieved to know our sex life is currently very happy and healthy. We suffered a lot from 'small child-itis' - that is the Grumpy Old Man did. Being a very hands-on dad, he just didn't feel very sexy...

We've been through some tough times. We had a very tough patch in 2003-4, it really tested our relationship, but somehow we got through it. We've had another tough patch since the beginning of 2009, but this time has been very different - this time has not been a test of our commitment to one another, but rather a test of the two of us against the world.

One thing I think we've always had going for us is that we talk a lot - to each other, that is. We are not ships passing in the night, despite having four children and his mother to look after and being on-the-go constantly, we always find time to talk. We talk about stuff we're dealing with, whether it be the kids or other stuff, we talk about current affairs, we talk about esoterica.

The other thing I think we have going for us is that we can happily not talk, as well. Both the Grumpy Old Man and I are introverts and often spend time apart together. Yes, that is an oxymoron. What I mean is, when the kids are in bed, we can be in different parts of the house doing our own thing and it's all good. Or we can be in the same room and not talk and it's all good. There are only comfortable silences between us. I can not imagine a time when we might run out of things to talk about.

We argue. Yesterday, we had a whopper of an argument over the placement of a folder in a filing cabinet. We don't hold grudges and we let ourselves cool off and we move on. We don't usually apologise after arguments - even though every marriage counsellor on the planet seems to think this is necessary to a happy marriage - there is no need because we have a deeper understanding of each other and we forgive because we know the strain each other is feeling at the time.

We are both hopeless at buying each other presents. After all these years, I still don't think we really understand what the other one values. I cannot pick his movie or book likes, and his mind goes completely blank when it comes to finding birthday and Christmas gifts for me. We usually just have to tell each other exactly what to get. And that's okay.

We've only ever had a handful of comments on our age difference over the years. The Grumpy Old Man is twelve years and eight months older than me. I've often read couples with large age gaps say it makes no difference in their relationship. I have to say this is not true for us. Our age differences heavily impact our relationship. Possibly this is emphasised by the fact that his parents were older when they had him, and my parents were younger when they had me, so his parents are my grandparents age, and my parents are less than a decade older than him. We often feel the generation gap. It can be frustrating because our world views can be very, very different, but at the same time, it can also be very good because we both get to learn why the other generation feels the way it does about life.

We never really had romance. There wasn't really ever the swooning thing. We do have love though and to be honest I much prefer that because we haven't had the disappointment of the first blush wearing off and having to adjust to everyday reality. Instead we've gone from appreciating each others conversation and company to a deep sense of love and commitment which accepts all imperfections of each other (Well, most of the time! We're not saints).

One thing we probably do that is recommended for a good marriage is laugh. We laugh a lot. Sometimes we laugh so hard someone farts, and then we laugh even harder. We have a strong sense of the silly. Laughter is an amazing balm.

So, there you go! We got married in black, eloped, got pregnant before getting married, not didn't consummate the marriage for 16 months, barely had any sex for the next twelve years, argue and don't apologise, have a large, intrusive age gap, didn't fall head-over-heels in love to begin with, and we are hopeless at buying each other presents, but we are still happily married after 14 years, still together after 16 years...

at November 14, 2012
Email ThisBlogThis!Share to TwitterShare to FacebookShare to Pinterest

What a great post !!! I love hearing of couples who are happy together - who stay together because they love each other not because they have children together !
Laughter certainly is a great thing to share - sometimes we laugh lots, sometimes not so much - and then I wished we laughed more !!
Have the best day and CONGRATULATIONS on your 14th anniversary !
Me