Is it Christmas yet?

Bryn just came up to me and whispered with much excitement, 'Tomorrow is our Christmas Eve and I can't wait!'... Doesn't it just make your heart melt?

I have to admit, I haven't even played one of my Christmas albums yet - though having written that I'm very likely to do so today - I just haven't thought about it. This week has been busy, busy, busy!

Mum and s-dad came for a visit on Monday night and left on Friday morning. Actually, they left on Thursday afternoon, but then after doing a computing workshop for work and visiting my brother, they realised they were just too tired for the drive home and crashed here one more night.

Having them here was wonderful!

We're all really looking forward to them moving back here at the end of January so mum can take up her new position and s-dad can build their uniforms business. It looks like I'm going to get some voluntary work doing administration duties in that business and I'm very excited about that for two reasons. First, it will allow me to learn some new skills and add some recent, actual work to my resume and second, it will make me eligible for a mobility allowance payment under the voluntary work scheme. It also helps them out a bit because with a fledgling business, they can't afford to take on paid staff but s-dad will also need to be out there drumming up custom and with mum working elsewhere for a steady income, the situation leaves them a little short-handed.

During the week the administration at Tabor sent a letter to the HDR department at Deakin with all the relevant information showing I should have been properly considered for the PhD at Deakin. I'm not holding out much hope this will lead anywhere, really. At this stage, the HDR department received the letter just two days before the end of the working year and then it only went to one person, so really he could just pretend he never received it and not do anything. I have a lot of built up frustration and resentment over this entire matter. I really feel I should have been working on the literature review at this point and not looking at applying elsewhere. I'm trying to let it go, but I honestly feel quite ripped off - I worked hard for the Masters Degree and because Deakin didn't check its facts, I was not given equal consideration to other applicants. On top of every other idiotic situation which has cropped up over the last few years with Dave's work and so on, I'm feeling very paranoid about the some sort of universal conspiracy to keep us down.

Yes, yes, I have a logical side of my brain which says this is just nonsense and that I need to understand everyone goes through shitty stuff and it will be okay in the end and we've also had many blessings, it's just the petulant, childish side of me that screams, not fair!

The Grumpy Old Man and I lay in bed last night marvelling at the fact we now have a child going to high school! The years are passing very quickly, indeed!

Erik received the most delightful poster as a graduation/early Christmas present from his mate, Harry... 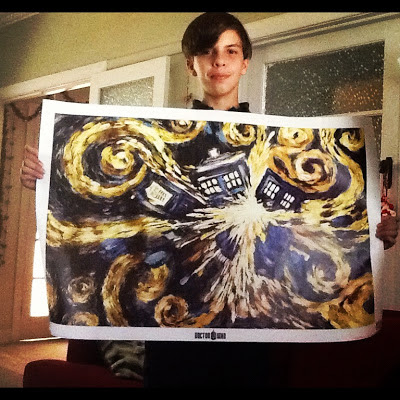 How awesome is that? We were all very impressed around here!

Bryn also had his junior school Christmas concert, and he was so cute! 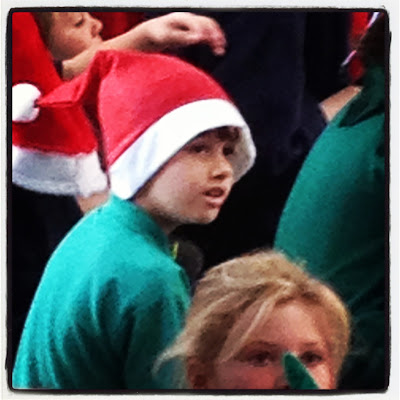 I was quite pleased to see him getting along very well with the child he had so many troubles with in the second half of the year, things seem to have settled down nicely between them!

We did a lot of Christmas shopping as well - thanks to MIL's generosity - and thanks to my parents being here we didn't even have to navigate public transport too much! We heard last night that there is a proposal to put a night time curfew on P-plate drivers, and I joked that by the time we eventually get a car, the Grumpy Old Man won't be a P-plater anyway (the curfew only applies to young P-plate drivers on red Ps, as far as I can tell, the GOM is on green Ps for older drivers - I think it has already been implemented in our state but the news was referring to NSW and other states).

I'm very grateful that we will be having a good Christmas this year - for many months now I've believed we wouldn't have any kind of Christmas at all, but MIL and my parents really came through!

I'm very excited about the boys presents this year, I think they'll love them. I have to wrap everything tonight and will take a photo of the boys and the tree and presents before Christmas (which for us is Monday).

2013 is just around the corner, but for me, in many ways, it has already started.

Are you ready for Christmas and the New Year?

at December 22, 2012
Email ThisBlogThis!Share to TwitterShare to FacebookShare to Pinterest