The problem with judging books by their cover...

I have ADHD, and as part of this disorder, I do have a strong tendency to hyper-focus and to obsess or get stuck in a loop with my thinking. This post is about something which was written in the email I received explaining why my PhD application was unsuccessful. It may appear that I'm obsessing, but please bear with me; there is a 'bigger picture' thought process within this post.

Let me quote part of the email I received.


The difficulty in your particular case was that bothmasters supporting entry into a research Ph.D. appear to becoursework only, namely, an M.Ed. from Melbourne (2002)averaging a low H2A (72%) and an M.A. (Creative Writing)from the non-university-accredited Tabor College (2009).

I have no issue with the bare bones assumed facts of this paragraph. They assumed correctly that the Masters I did at Melbourne University was a course work Masters. They assumed erroneously that Tabor is a non-university-accredited college, and based on this assumption they, referred back to the Masters at Melbourne, which was course work and therefore didn't qualify me to enter a doctoral degree at Deakin.

The reason, I believe, the line 'averaging a low H2A (72%)' is included is to point out that even if they were able to consider a course work degree, my mark was not competitive compared to other applicants.

What stands out to me though is the context of this mark - something they cannot at all be aware of and therefore cannot be blamed for noting it only just scrapes over the minimum benchmark entry (though an H2A at Masters level is not a mark to be sneezed at in any case).

I am very pleased with that mark! In fact, I wasn't even aware 72% was my average for that degree until I received this email and I was very pleasantly surprised by this information.

You see, even though all the other applications probably had higher markers; higher percentage H2As or even H1s, I know the circumstances by which I clawed my way to that 72% average.

While doing that Masters degree I gave birth two children, and raised them to the ages of 3.5 and 18 months. I suffered with undiagnosed anti-natal depression and agoraphobia and later with post-natal depression. I worked around having attention deficit hyperactivity disorder (unmedicated) and being legally blind. I had absolutely no childcare for the children, no car to drive to libraries and to deliver last minute assignments.

I know many students achieve great feats in study against unseen odds which go unrecognised by academia because they are not accounted for on transcripts or in average calculations - I know because I have lived through it.

As my mother tells her students, 'Results do not reflect ability so much as they reflect circumstance.'

On Facebook this morning a teacher friend of mine posted the following image. 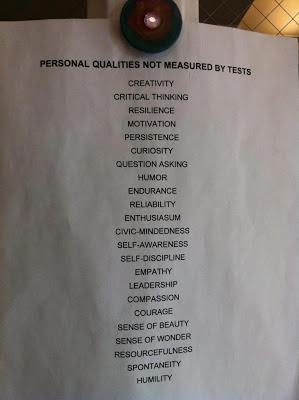 There is so much truth in this photo.

So, if you have achieved a mark which is high enough to gain you access to the next echelon of academia, even if you *only scraped in*, be proud of your achievement within the context of your circumstance at the time. The percentage you received ignores so many qualities which are essential to a successful life...

at December 08, 2012
Email ThisBlogThis!Share to TwitterShare to FacebookShare to Pinterest