[Insert your own title here]...

I know any blogger worth their salt will always finds a catchy title for even their most mundane posts, but I really just don't have it in me today - and yet I want to catch everyone up on the past few days of our lives (because I know you're all hanging to know, right?). I know my readers are savvy enough to come up with their own title for this post, so I'll leave that up to you and am completely willing to take the chance it'll be 'Boringest Post EVAH!'

So, where were we?

Ah, yes, when I last left you all hanging I was about to have a family meeting with the boys about rights, responsibilities and rewards.

From that meeting we now have a time table (of sorts) for the coming school year...

We brain stormed these three lists together - and they are now hanging outside the boys' room as a bit of a reminder of what we talked about... 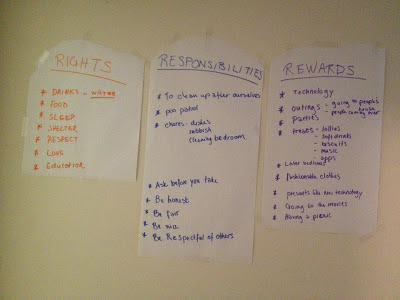 Then I told them I would be implementing the following timetable for weekdays here at home. I'm sure - to some of you - it will seem very strict, but keep in mind that if this timetable is adhered to diligently the boys will, in fact, have all of Saturday and all of Sunday for playing on devices and hanging out with friends and no having to do any homework (unless something is really pressing and must be completed before the following Monday. This also means Erik will meet the 10 hours of homework per week which is required as a starting point for high school. 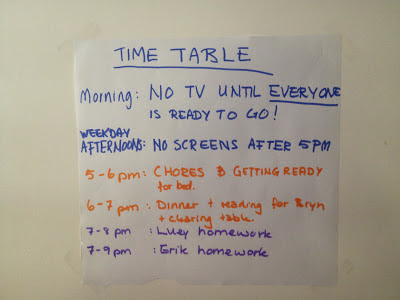 After the family meeting, the Grumpy Old Man went to speak with his mum about her helping us get a car. She is well positioned to help us get a car, which would also be of benefit to her - but yes, mostly to us - but she has wavered on doing this for years now. He was sent to get a straight answer out of her, which he didn't get. He went back on Monday to run some errands and try again to get an answer out of her. This time he told her we were starting to look into financing for pensioners rather than relying on her to buy a car.

She didn't take that bit of news very well at all. In fact, she flew into something of a panic and started talking about harming herself if we did that. The Grumpy Old Man was very upset about this. What it tells me is that she doesn't want him to drive at all. She has decided in her own mind that if he drives he'll end up in an accident or as a victim of road rage (things she's mentioned in the past), so she was sure if she didn't get us a car, then we wouldn't get one. Once we mentioned financing, she panicked because it might mean he could get on the road anyway.

Thinking back, we've realised that she stopped paying for the GOM to have driving lessons after father-in-law passed away (so after the first six month of lessons), so it's very likely that FIL passing triggered greater anxiety in her which is completely understandable.

The thing is, we really need a car. We have four children in three different schools/kinder this year. The Grumpy Old Man could sign up with an aged care agency if he had a car, and we really need him to work, or me to at least do some voluntary work to receive Mobility Allowance; As it is dropping Ari off or picking Ari up from kinder is at the same time Luey and Bryn would be going to school or coming home from school - one of us can't be in two places at once if the other one is working etc.

On Sunday I went over to my brother's so he could do some colour work on one of my tattoos...

First he painted (with water colours) over my existing lotus tattoo to establish a pattern. 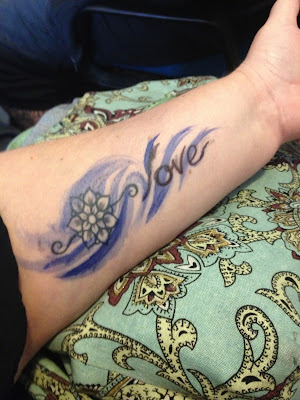 Then he did what is called a 'blood line' - which,  basically as it sounds, is a line with no colour, done with water, and into which blood seeps. The point of a blood line is to outline where colour will go without doing a hard black outline. 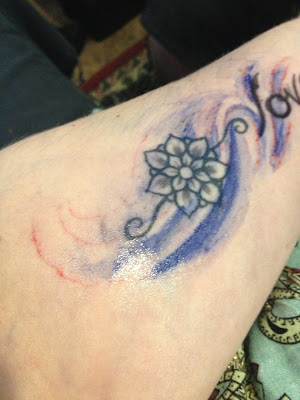 He tattooed in the word, 'Love', which we slightly changed the design of because we both felt the L need 'something more'. 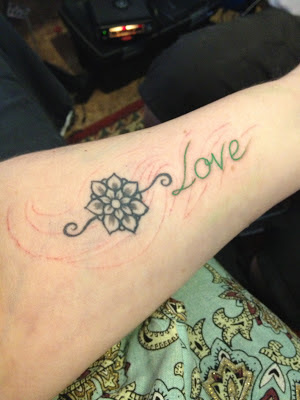 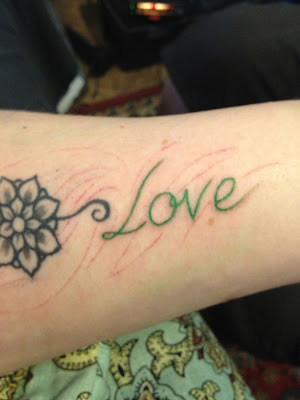 After this he shaded in colour - this bit didn't hurt too much. 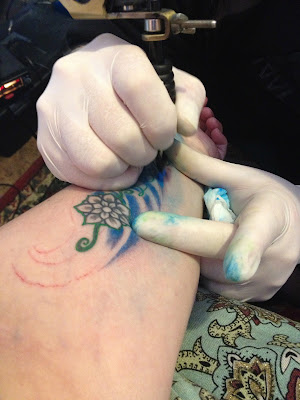 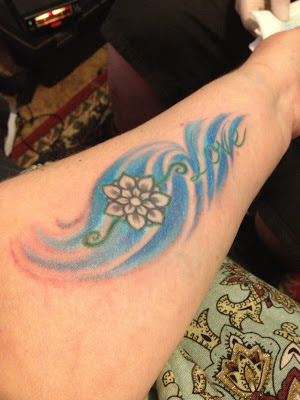 Next he coloured in the lotus, and then we decided the word didn't stand out quite enough for my liking, so he did a contrasting yellow background to lift it a little. There was no red or orange ink - that is blood. The yellow shadow was absolute agony because it was in such close proximity to the original word which had been done an hour or so earlier and had already started healing. 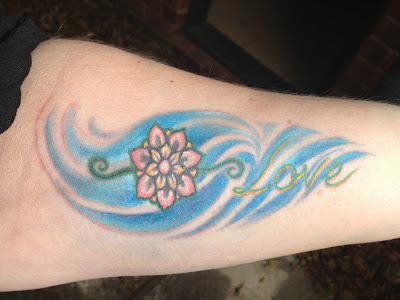 I didn't yell or cry or swear, I was very good! I didn't want to be like this guy... 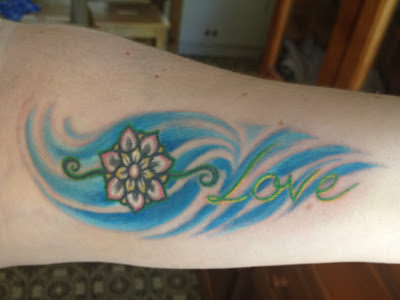 The healing on this one has been so much better and easier on the quill on my right upper arm. I left it until it started to dry out a little then put Bepanthen on it - Mike has told me to beware of Bepanthen because he has seen some allergic reactions to it lately and was concerned that perhaps the formula had changed, but it seems to be working fine for me.

I may need more work on the quill though as the black has dropped out a fair bit during the healing process. This is possibly because I let it dry out too severely (it became far more scabby than anything Mike had seen before). Whatever the reason, I want to let all the tattoos heal completely (and my piercing as well, which has been good and bad on and off over the past few weeks) before getting it sorted. I need a break from healing!

Yesterday we took the boys out and bought school socks, shoes and pyjamas. We scored well with Erik's shoes only costing $18 a pair and because they were so inexpensive and therefore may come apart quickly (considering how hard he is on his shoes) or he might grow out of them quickly (considering how fast he's growing at the moment), we bought a second pair in the next size up. They were in sizes 9 and 10 - The Grumpy Old Man is a size 9 as well! Erik also got runners to go with his sports uniform. Bryn and Lukas' shoes weren't falling apart but we thought it prudent to buy them new shoes as well while we have the School Kids Bonus to help out. Ari got a new pair of shoes because a) they were a super cheap $7 pair and b) he wasn't getting anything else and would feel left out. 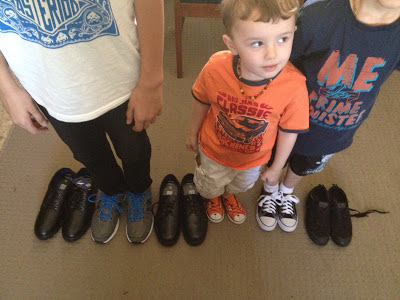 Last night Erik had a mate over to beat a 'boss' on a Wii game and then they walked back to the mate's house for a sleep over...

Today I met up with a bunch of mums I've known for up to ten years now - some of us haven't caught up in person for a long time, some of us catch up regularly still. It's funny to think the older kids (now 9-13) used to be the babies in our group. There were a couple of real babies there today, and one being baked but the majority of kids are school aged now. It was really good to catch up with everyone! 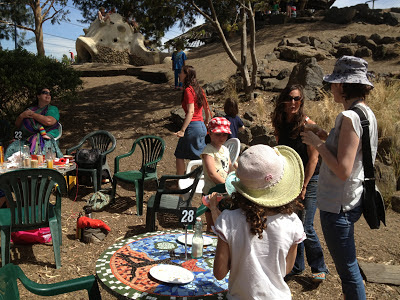 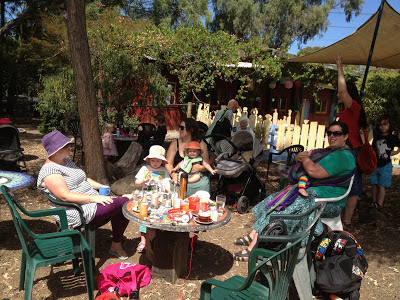 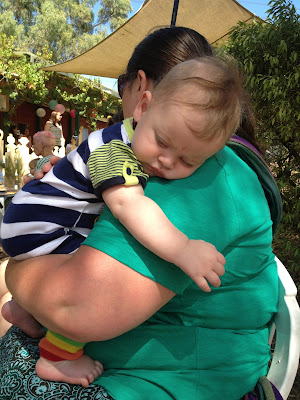 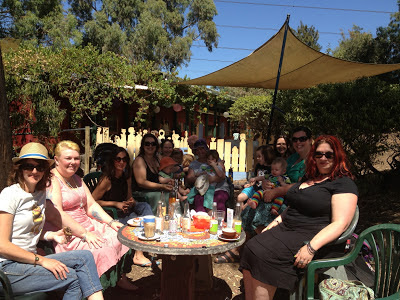 I really should have gotten a photo of the older kids, but they were off having a 'technology pow-wow'. Funny consider so many people in the wider community would consider our particular parenting style very much a hippy movement phenomenon! I guess no parent is immune to the march of technology...

Yesterday we received an email from the temporary real estate agent managing our property. He said two lots of constructors need access to the property on January 25th and 29th for 'a site inspection and planning'. He said he thinks they need to tweak the plans which have been submitted to council twice already in the past two years. The tells us the owners are still intent on building in the back yard. I guess they're hoping for 'third time lucky'. It also might explain why they didn't want to give us a 12 month lease back in August. This is probably what I loathe the most about renting, that lack of certainty about where we will be living in the coming months. The Grumpy Old Man told the RE we want to stay here even if the owners start building (something the regular RE has discussed with us in the past), but honestly I don't know how we would manage that, having lost the back yard completely and as well as all the storage space of the garage.

I guess only time will tell.

at January 16, 2013
Email ThisBlogThis!Share to TwitterShare to FacebookShare to Pinterest