It was tatt sort of day, yesterday...

How are you all?

If you're living in Victoria, South Australia and Tasmania, I imagine you feel somewhat sleep deprived and irritable today after yesterdays shocking heat - which lasted well into the wee hours!

Today in Melbourne, it's going to be a comparatively balmy 29 degree - unfortunately, inside our house, it's already 32 degree (I'm talking Celsius here).

From what I understand, most people spent yesterday at the pool or the beach. My lot spent it at home, except Erik who escaped to the cinema in the afternoon to see The Hobbit with some mates (the rest of us are thoroughly jealous).

I left the house very early to take the two hour bus trip over to Tullamarine to visit my brother, Michael. The aim of the day was to create two new tattoos to adorn my skin! Just two and half years ago I had no tattoos, now I have eight and as Michael pointed out yesterday, each one has gotten progressively bigger and more elaborate...

On the upper middle part of my back - the tibetan numeral one - which signifies the unity of all things. 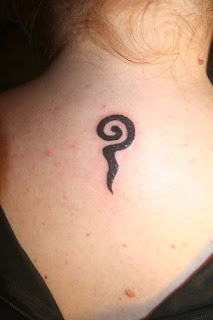 On my right shoulder blade, a stylised butterfly which signifies transformation (specifically the transformation I have undergone since having Erik). 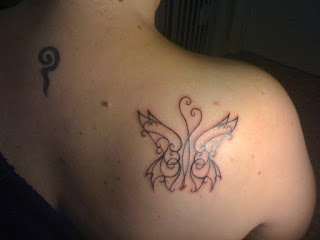 On my left upper arm - a sun - which signifies a star and represents Lukas who was always our little star. 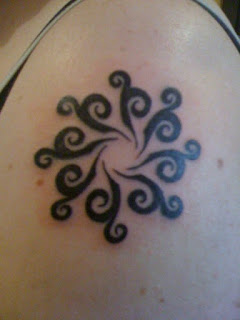 On my left boob (which is why it is a little stretched - and difficult for me to photograph) an Om inside a heart which is for Bryn because he is our Buddha boy and my heart. 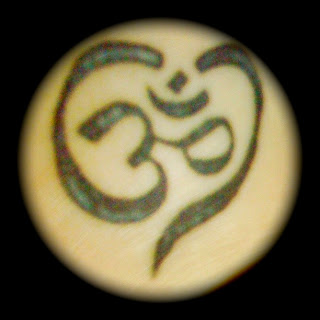 On my inner right forearm - an original design 'eternal gratitude' symbol (I created this from the symbol for gratitude in and two stylised eternity symbols) for Ari who is the last of my children and for whom (well, all of them, really) I am eternally grateful! 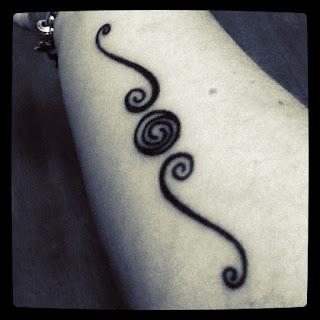 On my upper inner left forearm (so up near the inner elbow) a small lotus flower, which signifies purity of speech, mind and body, rising above the waters of desire and attachment (this is more about remembering to be the best person I can be; not letting myself get bogged down in thoughts of what I wish I had or could make happen). 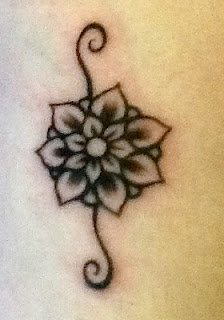 A much longed for elephant blowing butterflies out of its trunk. This is a direct reference to my writing blog The Untamed Voice but also signifies a few things besides.

First is the ridiculousness of an elephant blowing butterflies out of its trunk. I quite like being ridiculous - it's very freeing and allows the imagination to flow. Second, I love elephants, especially baby elephants, but all elephants really. Elephants signify a lot of things; strength, stamina, wisdom, a long memory, they have a very strong sense of family, they are intelligent, and an elephant with an upturned trunk is also supposed to bring good fortune. Butterflies signify transformation, as I mentioned earlier, they show that even ugly caterpillars can transform themselves and take to the skies. Also butterflies are deaf, but they lead full lives and inspire people despite this 'disability'.

Here are the stages of the tattoo - the elephant has been outline and the butterflies have been free hand drawn with a sharpie on my shoulder. 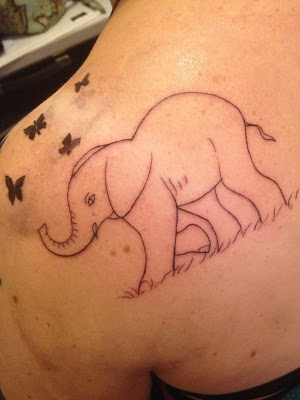 Here the butterflies have been outlined, but not shaded in with colour yet... 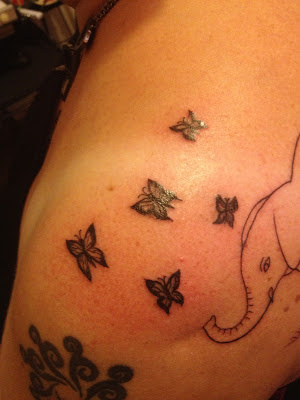 And now everything is shaded in - the low light means you can't really see the colour in the butterflies in this photo... 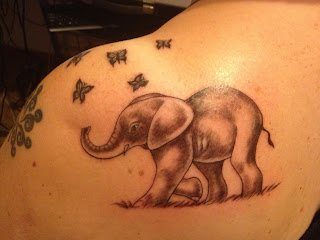 Here's one Erik just took in daylight so you can see the colours in the butterflies a bit better - it's subtle but it's there! 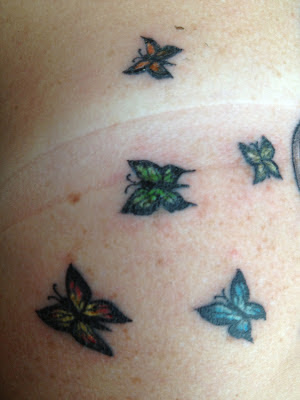 And then on my right upper arm I wanted a quill. I didn't really know what I wanted exactly and showed Mike a number of photos of feathers and feather illustrations including these three...

I liked the shape and flow of this one... 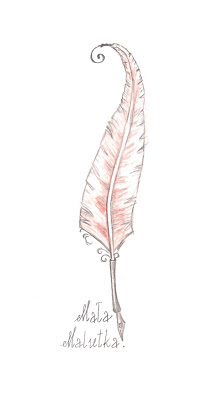 I liked the use of colour in this one... 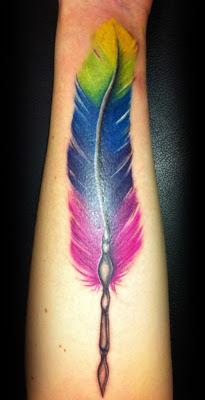 These feathers are from the Gyrfalcon which is the national bird of Iceland... 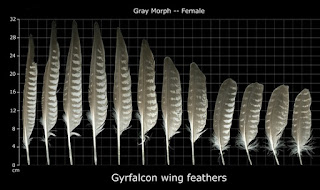 I showed him more besides, but I think you'll see these three images were his main sources of inspiration. In the first instance he took a sharpie and sketched a feather of my arm which was similar to the first image, but broader - to fit the space better - I loved it instantly, even in chunky black texta! So, we left it there for a while and worked on the elephant tattoo, then went and had lunch (me with texta all over my arm!) then came back and started on the quill tattoo.

Sadly, we totally forgot to take a photo of his original sketch!

He decided that for this tattoo he wouldn't create a stencil to work from, but instead would 'paint' the tattoo (he really enjoys painting tattoos, but doesn't get much opportunity to do so because clients generally just have a design they want coloured in). Basically, he employs painting techniques to loosely build up layers of colour and highlights and shadows as he feels inspired. We discussed colour, but I really couldn't decide what I wanted, so said to him to just do what came to him.

It was a pretty risky tattoo to do on reflection. Not all paintings turn out, especially when your pants them (do them by the seat of your pants) with next to no preliminary sketching. In the end I was just amazed by what he came up with - I could never have designed, or even imagined, the quill I ended up with! As you will see, he added elements of the Gyrfalcon as well, which I really appreciate.

Here he is painting the quill on (you can see his very basic texta sketch, which he would wipe away as he started each new area)... 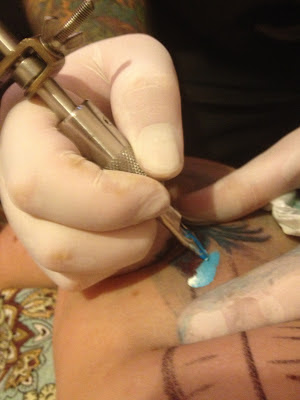 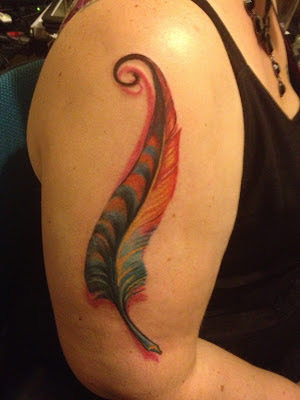 Now, something I have to mention is that previously I've mostly used an analgesic gel on my skin to numb the pain of getting the tattoos (it works for a while, then usually wears off, but it helps with the initial shock of an outline). I didn't have any when I got the eternal gratitude tattoo and that one REALLY hurt - being on my forearm, but also it was the last one on a long day of tattooing.

Yesterday, partly because the pieces I was having done were larger and analgesic gel is expensive and partly because I was curious, I decided to forego the gel. I can tell you the elephant and butterflies really didn't hurt at all, well, not after the first 10 minutes! The butterfly closest to my neck hurt a bit, and I have to wonder if neck tattoo don't just kill?!

However, when we got around to do the feather, I'll admit, that one hurt a fair bit. I didn't moan and carry on or anything, but I did have to squeeze my eye shut a few time, and breathe out very slowly and remind myself each mark was one closer to it being finished. Maybe because it was on my arm and I'm more sensitive on my arms, or maybe because I'd already had a few hours (with breaks) of tattooing and my body may have reached its limit for producing adrenalin, seratonin or whatever it is that masks the pain of a tattoo.

Today, the feather is more uncomfortable and 'sunburny' than the elephant, as well - which may very well be because it's on a part of my body which I am constantly moving, as opposite to my shoulder blade which is relatively passive.

That said, I have no plans for any 'new' tattoos, though I have plans to extend the two on my left arm (partly to balance out my right arm and partly because they need colour) and to add colour to the other black tattoos which i already have. I have been very fortunate that to this point my brother has done all my tattoos for free, but I'm really aware of the fact that he's done a lot of work now, so I can't continue to not pay him, so that'll also put a limit on how much I can do from here on in!

I really love all the tattoos I already have though!

at January 05, 2013
Email ThisBlogThis!Share to TwitterShare to FacebookShare to Pinterest

Oh wow, he does a great job! I think the elephant and quill are very artful ... not that I spend any time seeking out tatts to know but they look like something outside the normal subjects, very nice.

Thanks! Yeah, I finally feel like a have some actual 'Mike art' LOL, rather than lines and other people's designs.