As soon as I mention that I have been writing every day, I stop. I guess it was just too much pressure having made that statement. Or perhaps, I've just been really busy and by the time I have time and space to write I'm just too tired.

This past week (since Friday last week) has been a time of transformation around here. As I mentioned on Saturday, I had two more tattoos added to my collection. In the past few days those have scabbed over and are now starting to emerge from under all the crustiness (it is exactly as gross as it sounds!). There is still a way to go, but I'm hoping by this time next week the crusts will all be gone - and I'm trying to be very good about not picking at them, though I have not been 100% restrained in that regard.

On Tuesday we took Erik to get his high school uniform. Some of it (2 short sleeve shirts, a pair of shorts, a spray jacket and his school bag) is still on back order, but we did get his blazer, a pair of shorts, his tie, school hat, and some grey socks (which he will never wear, because he prefers white). He also got his sports uniform - which looks just like his primary school uniform!

He tried on the jumper in order to get the right fit for the blazer (over it), but we won't order the jumper and long pants until mid-autumn. As I've mentioned before I don't like that uniforms subdue individual expression, but boy does he looks great in it! 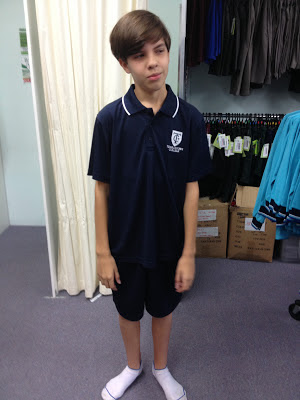 Summer uniform with jumper, which we'll order in April. 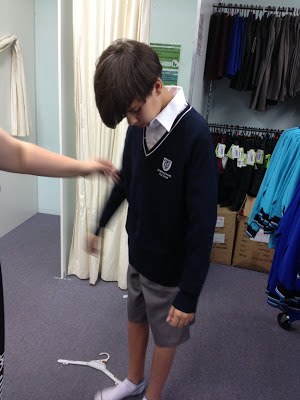 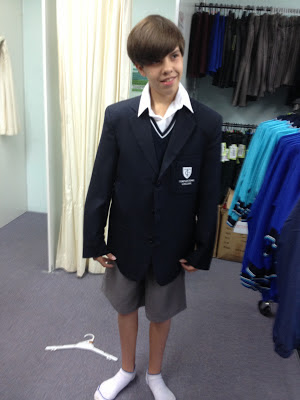 So, Erik's transformation to high school boy is under way! The colours of this uniform suit him so well! We have bought the navy-with-white-pinstripe tie, and he will wear it on the first day (because they're taking a cohort photo), but from what we've seen around the school most kids don't wear the tie, so I'm thinking he probably won't either - though you never know, this kid does kind of like blazers and ties! Shoes also need to be bought - I'm a bit excited about that.


But, of course, I can't just let the child blend into the an homogenous, uniformed crowd in the school yard... So, I granted him the wish of colouring his hair green! This photo does not fully reflect the utter green-ness of his hair, all that yellow shine is in fact as green as the greenest bits you can see there, it's just that my camera doesn't pick up green very well - apparently! 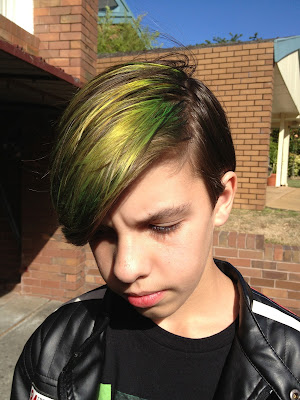 And since I was letting him bleach and colour his hair, I got in on the act, as well. I was going for snowy white hair, but it seems my natural colour has a lot of natural red in it, so after an initial bleaching it looked like this... 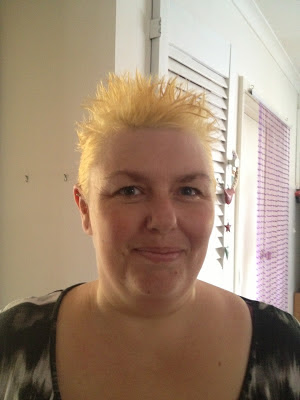 I decided to add some pillarbox red and electric lizard green tips after an application of toner... Looked awesome while wet and clumped together... 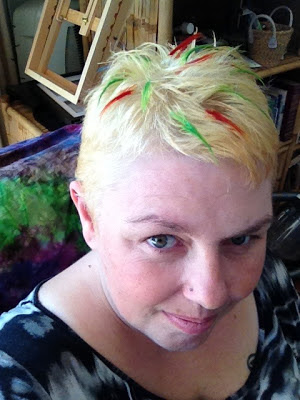 And still striking once dry but unclumped... 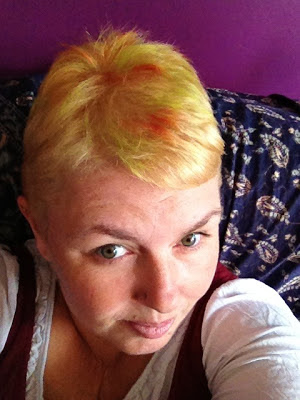 But I wasn't completely sold on the yellow, so I did some purple toner again, and some toning shampoo (about three times) and it ended up like this... 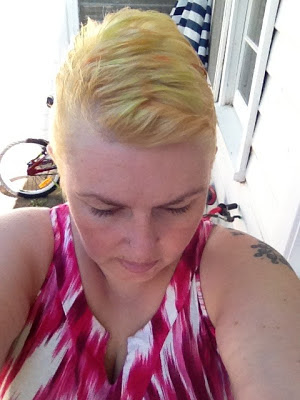 Obviously, still very yellow with green and pale orange 'bits'. Not the white I was looking for, but I actually really like it anyway, and have decided to own the yellow and wear it with pride. Of course, I could put green over it, or another colour, but for now I'm just really happy to leave it like this.

In another week's time, the hair colour will have settled some more (and I'm going to keep washing it with purple shampoo, to keep the yellow to a paler tone), and the tattoos will be healed, and Erik's uniform will be all bought and our transformations for January will be complete!

A change is as good as a holiday, they say, but especially when it happens during the holidays!

at January 10, 2013
Email ThisBlogThis!Share to TwitterShare to FacebookShare to Pinterest

My haior does the same thing when I bleach it - I found ONE hair colour that actually got to white, it's one of those diamond ones, and it has the option of blonde with silver highlights, or blonde with gold highlights (2 different boxes) - go the silver. white so white it glowed in u.v. Was AWESOME!

And you look great :)