Tuesday night was spent trying to decide what Erik should take with him to school on his first day in year 7. Why don't high schools send home some sort of information about this? Something like, 'On the first day, your child should bring x, y. z...' would be really helpful. I'd read on a parenting forum that a common first day of year 7 mistake is to take every book. It's hard though, because you have no idea what classes the child will be taking, if any, or if they need to stow their books in their locker most of the time and only take them home for homework...

I managed to convince Erik he only needed his laptop sleeve, and not the satchel. This took some discussion, but when he got home yesterday, he said he was very grateful he had not taken the satchel because a lot of other year 7 students looked like beasts of burden with their folio, school bag and laptop bag.

He freshened the colour of his hair, and told me yesterday he'd received some positive feedback from older students at school about his cool hair. Unfortunately, when he arrived at school this morning, he was approached by a teacher and told it's not appropriate - only natural colours are appropriate - so it looks like green hair may be a summer holiday thing only. I did check the school site for a hair policy (many schools have them), there wasn't one - I guess there may be one soon though. No harm done.


When he left the house he looked like the preppiest of preppy high school boys...

By the time he came home, he'd ditched the tie, and the blazer and his shirt was hanging out of his shorts and he looked... just like every high school kid ever!

As predicted, the tie will probably not go back on - no one wears them, though several year 7s wore them yesterday because, well, they didn't know...

He received his timetable. It's a fifteen day timetable; it repeats every three weeks. He had a print out in something like 2pt type that even he was having trouble reading with his glasses on. At the end of his first day, it was already looking fairly crumpled. So, I spent about three hours last night transcribing it into word, so we have a printable copy to replace the copy he has which will inevitably be lost or crumpled beyond readability. The original timetable contains information about the class teachers and the rooms the classes are taught in. It's quite complex... 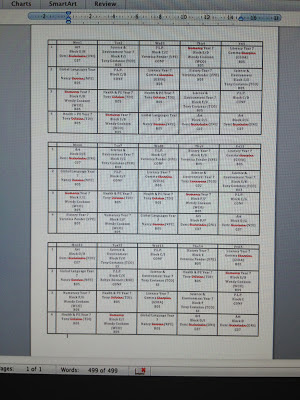 I want a timetable to hang in the kitchen so he and we can see at a glance which classes he has on which days - this will help with knowing whether he needs to be in regular or sports uniform, and whether he needs to bring extra stuff for, say, his personal learning project class. It also tells him which units of which class he will be covering in particular sessions. I thought it might help him to also colour code the classes (that helps me, in any case). So, I made this abbreviated timetable for the cork board in the kitchen. 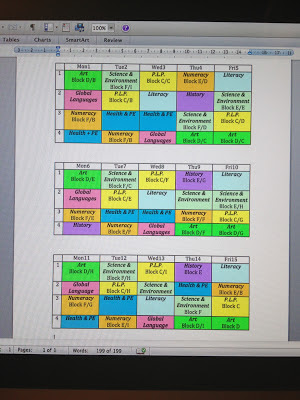 As well as Erik starting high school yesterday, we had Ari's kindergarten interview. He was very excited! While he explored his new kinder room and met some of the other kids, we sat down with a small group of parents to hear about various kinder protocols. It's going to be much more involved than it was when Bryn went there. For one thing, each child has their own journal which the teachers and parents both contribute to to create a memory book for the kinder year of events that happened at kinder and at home during the year. There is the visiting bear journal from when Bryn went there, as well. There will be homework - I kid you not, she said homework, though she said it would be very simple, like writing a love letter to your child for Valentine's Day (we don't actually do V day here, so that'll be different).

It was heartwarming to see a poster the kids from Bryn's year made still hanging on the wall! 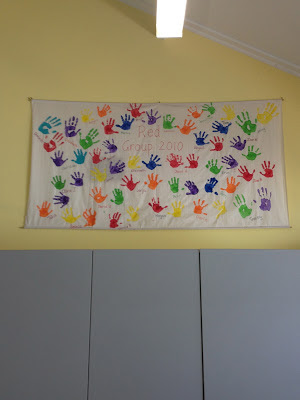 Here's a close up of Bryn's tiny little four year old hand print... In his favourite colour - of course! 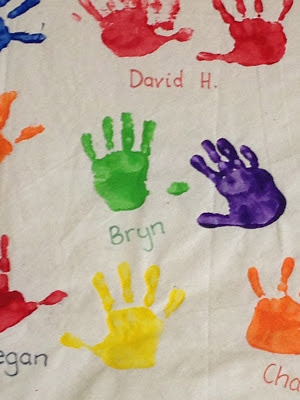 Ari was very happy to see the kindergarten has a good collection of trains and tracks! Here he is playing with another boy from his group. 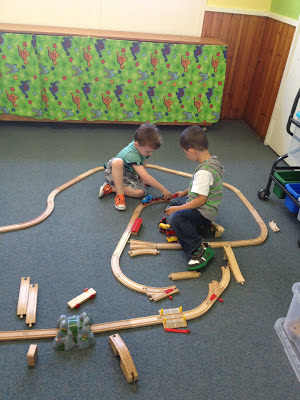 We also got to pick up Ari's kinder uniform. It's miles too big for him, but he looks very cute in it, all the same! 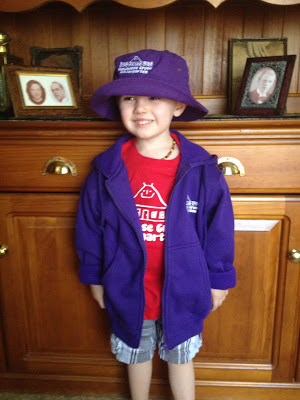 He has four tops; two tees, red and teal, and two long sleeved tees in red and teal as well, and then a purple hoodie, purple sun hat and purple beanie. It was interesting to see that most parents had bought uniforms. Apparently they were being sold when Bryn went, but no one bought them (they weren't promoted at all), this year everyone seems to be buying them. 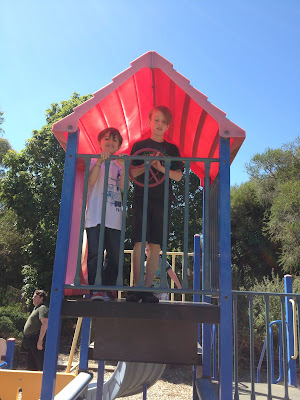 We went to our old neighbourhood park which is across the road from the kinder - I couldn't resist this photo, was sure I had another just like it somewhere on the blog but can't find it now, they look so much bigger these days! I remember when Bryn had to reach up for that steering wheel!

Lukas and Bryn are off to school tomorrow.

I'm despairing of not having a car! A year ago I was very hopeful Dave would be getting his licence soon, it took another five months. In June, when he finally did get his licence, I was overjoyed and envisaged life getting so much easier with ready transport. Yet, here we are at the beginning of a new school year and still no car. I mentioned to mum this morning that we've found out about a loan scheme for pensioners through the NAB and we could possibly borrow up to $3000, but she said that would probably only get a car with a burned out engine.

I don't know what we're supposed to do, though! With kids in all different directions and leaving the house and coming home at different times, we don't have the time for basic errands. It's ridiculous. I'm feeling very tired this week, but there is always something that needs doing. There is already a back log of errands that need running and the thought of that so early in the year makes me want to go to bed for a week.

at January 31, 2013
Email ThisBlogThis!Share to TwitterShare to FacebookShare to Pinterest