This is not today's scheduled blog post - which was going to be about the joys of a our traditional summer holidays' end game of Monopoly - but rather a blog post dedicated to thanking one of my loyal blog readers for her unexpected generosity!!!

A few weeks ago, I made an off-hand comment about the poor quality of my photos for that post and how I didn't have a working battery for my DSLR because the batteries I'd paid a small amount for to replace the original worked-to-death rechargables had turned out to be worth all the small amount I paid for them...

A week or so later I was doing some management work on my blog's Facebook page and realised I had an email I hadn't noticed earlier. When I read it, I discovered it was from a long term blog reader who is a photographer and was sure she probably had a battery lying around if I could tell her which DSLR I had. So, I told her I had a Canon 350D and it turned out she did indeed have a compatible battery she was willing to send me!

Wow, that blew me away! I sent her my address and counted my blessings!

It turns out I counted short because today a package arrived which was far too big for a single battery...

Inside we discovered this stash! 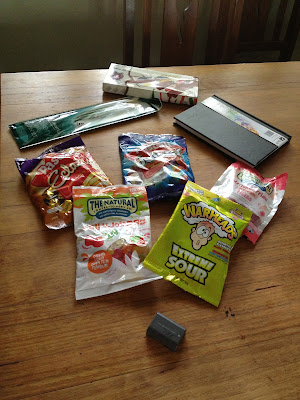 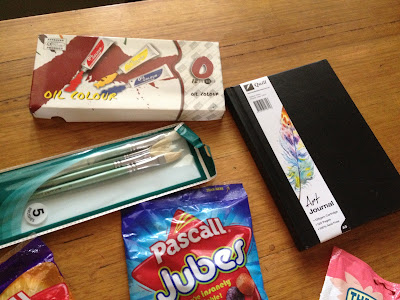 There was also a lovely note for Erik encouraging him in his art and explaining that the art book was so he could sketch inspirations on-the-go! Erik was excited about the oils as he's never tried oils before!

All the boys were excited about the lollies - that goes without saying, doesn't it? There were whoops of joy over the Warheads in particular, but quite frankly, there wasn't anything they didn't like!

The package turned up just at the right time, too.

We were expecting contractors to come and inspect our back yard for the planned building of two townhouses there. They were supposed to arrive at 9am, and we had a full day of picking up book packs from both the schools, as well as covering books, and preparing uniforms for Erik to start high school tomorrow.

By 9.45am the contractors still weren't here and we were starting to see the rest of our day backing up. I took Lukas and Bryn up to school to pick up their packs and came back to find no less than eight suited men standing in front of our property with clipboards and cameras.

Apparently the owners are appealing the last rejection of their building plans, and are now throwing everything at pushing this build through. The contractors were here for what felt like forever (but was really only an hour).

We were all a bit tense and then this beautiful generous gift arrived at the front door!

So, thank you Bec! We all really appreciate your kindness (and I was just really happy to hear I had a long term blog reader!!!).

P.S. I've already been playing with the camera, but haven't uploaded the photos yet - I'm soooo happy to have a proper camera to take Erik's first day at high school photos with, and Ari's first day at kinder photos, too!

at January 29, 2013
Email ThisBlogThis!Share to TwitterShare to FacebookShare to Pinterest

There are some very very nice people in the world.

Oh awesome Sif!! I'm so glad it arrived safely and you have already been snapping away. I hope Erik enjoys the oils - all he needs is some turps and he's off. I admit I went all red when I saw my name here hahaha!! You are so welcome, you have taught me a lot yourself so it really is somewhat of a payback :)