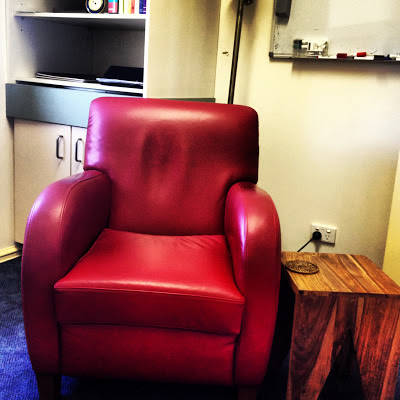 I went to my first counselling session for a long time this morning. The lovely young counsellor asked me what I wanted to achieve from the sessions, and I had to be honest and say it wasn't really my idea to come along. It was something my GP had suggested when she put me on anti-anxiety medication 10 days or so ago.

I told her I've already had a lot of counselling in my life, some formal, some because I have parents who are counsellors and who counsel me all the time for free (though, obviously, they're not impartial). I told her I'm fairly self-aware, I understand my triggers, I understand about acting to prevent anxiety and acting to soothe anxiety, but that that hasn't been helping me much lately, so basically I wanted to reduce anxiety but other than that I had no specific goals.

She also found out that my life story cannot be summarised and that it is very 'interesting'. I think she may have had some anxiety of her own by the end of the session - or at the very least, she might have been feeling a bit light-headed and in need of lie down.

She is very interested in Erik and my relationship with him - which is great because certainly a lot of my anxiety stems from my concerns about my talented but thrill seeking child. So, she has asked to meet him next week in a more child friendly environment. She would be interested in assessing him and having him undergo IQ testing, which I am very keen to see happen, as well. She seemed to have a theory about what his deal might be, though she suggested it might not be ADHD, or it could be ADHD combined with something else.

At least I feel like I'm moving forward in one area of my life.

at March 12, 2013
Email ThisBlogThis!Share to TwitterShare to FacebookShare to Pinterest

Sif it was so wonderful to read that last line where you say you feel you are moving forward in one area of your life.
Fairy wishes and butterfly kisses lovely lady