We've had our car for about a month now and it has been a month full of new learning.

A steep learning curve, with lots of stress and worry and sleepless nights - sound familiar?

The Grumpy Old Man and I can't help but feel it's been a lot like bringing a new baby home.

Some people, when they get a new car, it's all shiny and sleek and runs like clockwork and the most they have to do is learn how much pressure the gas and brake pedals need and how big the turning circle and other dimensional measurements are.

Other people get a new car (to them) and straight away there seem to be problems. It's hard not to ask yourself, 'Did I get a dud?', or smile in the face of other people's quips about 'buying a lemon' - in parent speak, it's a bit like being asked if your frequent night waker is a 'good sleeper'.

But just like proud new parents, the new car owner loves their new car, they want to be proud of it, they want to do what it takes to encourage their car to run smoothly.

The Grumpy Old Man and I are the 'other people'.

In the month since we first picked up Clover, there have been a few 'issues', shall we say.

On day one, the car stalled - it turned out the fuel gauge wasn't correct and we'd run out of fuel.

On day three, the fan in the motor wouldn't turn off which drained the battery quick smart and the left indicator light had to be turned off manually and would only click six times before falling silent.

As we were about to take the car to the dealership, the Grumpy Old Man realised the speedometer wasn't working anymore - obviously another roadworthy issue.

So, the dealership worked on all these things and we got the car back a few days later with a new battery as well (the RACV guy had said the battery was 4 years old, so had a limited life left, though it was running well for us).

Everything was okay for a couple of days and then we filled the car up and it started pinging and telling us the fuel tank was open when it clearly wasn't. Then the fuel gauge up and died completely.

The pinging subsided over the next day.

Then a little old lady drove past and managed to knock the driver side mirror clear off the car - she was rather annoyed we didn't have one of those mirrors which bends back, shame on us.

So, we didn't drive the car for the next couple of days until the time that the mirror was to be fixed by the insurer. When the Grumpy Old Man went to take the car for the repair appointment, it wouldn't start. We had to reschedule the appointment. The RACV guy came out again and jump started the car and we drove it around for a while and it registered a full battery. Over the next couple of days we found out the battery will only hold its charge for about 24-26 hours.

We also noticed the car had started leaking oil. We learned all about gaskets and checking oil and water and coolant. We now own coolant and oil, for top ups. We'll see about getting the gasket changed after the mirror has been fixed. The gasket should be covered by our RACV Warranty (thank goodness for insurance and warranties!).

Today we bought a battery jump starter for the car. 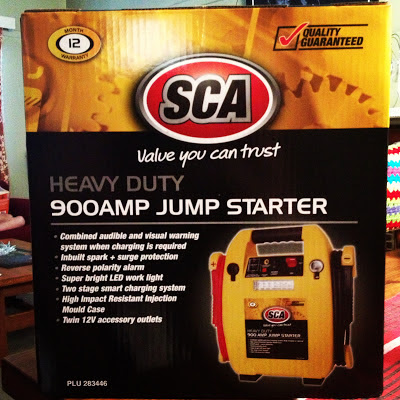 We figure having this means we can possibly put off paying for a new battery or alternator (we don't think it's the alternator) or wiring (in case something is draining the battery and it turns out not just to be that they gave us an old battery they knew they couldn't sell because it won't hold its charge).

So, our Clover is a colicky, unsettled baby who needs that much extra love and attention. We've had four kids, we know about steep learning curves and we're learning a lot!

Having a car is heaven sent when she runs and we can do things so much faster and easier. The Grumpy Old Man is quickly becoming more comfortable behind the wheel.

It would be nice though if one of the several applications he's put in recently for work would yield a real life job to help fund some of the 'colic remedies'...

at March 13, 2013
Email ThisBlogThis!Share to TwitterShare to FacebookShare to Pinterest

Oh my, Sif. It wearys me just reading about your car problems. It takes me back about 20 years, when I faced the same sort of thing every day. I'm glad those days are over, and I hope your problems will soon be over too.

lOL, thanks Bonnie, me too! In a way, I think this is really good for us, because it is really forcing us to learn stuff about cars and how they work and common problems from the get go. I look forward to one day having a later model car, but we feel so blessed to have any car at all - it's amazing to me!